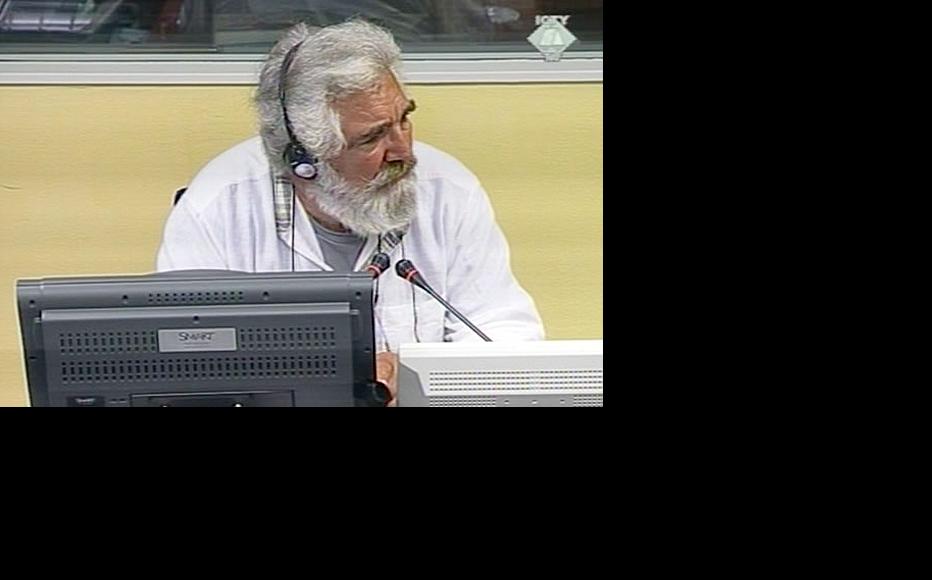 Rade Vujović, defence witness in the Franko Simatovic trial in the ICTY courtroom. (Photo: ICTY)
The link has been copied

The trial of the former senior Serbian intelligence officials Franko Simatovic and Jovica Stanisic continued this week with a defence witness telling the court that the former was hard-working and ambitious and the latter a “good role-model.”

The prosecution says that Simatovic was head of the Special Operations Unit, or JSO, within Serbia’s State Security agency, known as DB. As such, he was under the command of his co-accused in this trial, Stanisic, who was the DB, from 1991 to 1998.

They are both accused of participating in a joint criminal enterprise intended to forcibly and permanently remove non-Serbs from large areas of Croatia and Bosnia through persecution, murder and deportation.

According to the indictment against the men, Stanisic and Simatovic established, organised and financed training centres for paramilitary units and other forces from Serbia which were then sent into Croatia and Bosnia, where they committed crimes and forced non-Serb populations out of seized towns and villages.

Both men have pleaded not guilty.

Defence witness Rade Vujovic told the court he was a former DB official and colleague of Simatovic.

Vujovic described Simatovic’s role as being to advise on intelligence-gathering matters, and said he did not appear to be a commander or to be involved on operations on the ground.

“At the peak of my employment in what had become the new Serbian DB, I was the head of the so-called Seventh Directorate,” Vujovic told the court, adding that his own job involved examining different techniques for gathering intelligence. These techniques involved “basic hands-on intelligence work… every intelligence service does it”.

He explained, “We used eavesdropping, observation, and all the other usual technical and operational methods of intelligence work. We collected data and then gave it to people who knew what to do with it.”

Vujovic said that while he could not describe the exact nature of his interactions with Simatovic, the accused was “interested in the technology which we were applying and had many ideas and proposals about how we could upgrade and modernise our technology”.

“What I could understand, however, is that he was not a commander of anything, and that it never seemed to me that he was in any way connected to any concrete operations on the ground,” he added. “These operations were carried out by the Second Directorate, which was headed by a colleague of mine of the same rank, Dragan Filipovic, and I can't remember that he ever mentioned Franko Simatovic in any context.”

The witness also spent some time describing how the Serbian DB came to be formed. In the early Nineties, Vujovic worked for Yugoslavia’s federal security service, which was also known by the acronym DB.

He said that this service “had a different scope of responsibilities than the security service of the Serbian [republic]” at the time, when Serbia was a constituent republic of the Socialist Federal Republic of Yugoslavia. “There was a difference in the activities, and the country was large enough to afford such a big network of intelligence agencies.”

But when Yugoslavia fell apart, he said, it felt “natural” to unite the two, and between September and November 1992, the federal-level security service and all its Belgrade employees were absorbed into the Serbian DB headed by Stanisic.

“It would have possibly also made sense to absorb the republic security service into the federal one, but the republic service had a much better on-the-ground infrastructure,” the witness said.

He added that the unification was “peaceful and systematic, without any use of force or anyone being opposed to it”.

He also described the different locations where the Serbian DB was active during the wars of the early Nineties, and the structures and functioning of its operations in those locations.

Due to the sensitive nature of this information, the majority of his statement was given in closed session. However, the witness said in open session that “the DB was indeed deployed to gather intelligence data from a number of locations inside and outside of Serbia, in several strategic locations”.

Vujovic was also asked to explain the role within the DB of the Red Berets, a name commonly applied to the JSO unit.

“Their role… was to secure our operations from external influences. They were supposed to prevent counter-intelligence activity,” he said of the Red Berets.

According to Vujovic, the Red Berets were in western Bosnia in late 1994 as part of Operation Spider, in support of the Bosnian Muslim forces of Fikret Abdic, who had rebelled against the Bosnian government.

“That is where I also met Franko Simatovic personally,” the witness said, “and I remember that his position was to advise the service head [Stanisic] on issues related to gathering intelligence information.”

Vujovic said he knew Simatovic professionally but not personally, and would describe him as “a hardworking and ambitious kind of person”.

During questioning from Stanisic’s defence lawyer Wayne Jordash, Vujovic said he had not had any private contact with Stanisic, though he knew him “as any employee knows his boss”.

The witness also said he often took part in meetings where Stanisic was present. But he added that due to the “highly technical nature” of his role in the DB, he very rarely took part in political meetings.

He also said that while Stanisic's role was “necessarily related to political work”, it was also made clear to all employees “that any kind of political activity within the DB was forbidden”.

“Stanisic was in a way a good role-model, a professional chief. He did what he could to keep the DB as professional as it could possibly be,” Vujovic said.

During cross-examination by the prosecution, the witness said he left the DB in 1998 at the same time as Stanisic, “because the new leadership under Rade Markovic was completely politicised, unprofessional and uninterested in maintaining the level of professionalism which existed there under Stanisic”.

The prosecution queried the extent of Vujovic’s knowledge of DB operations outside Serbia. He replied that he did not know much, and had very limited knowledge beyond “the strict scope of the work of [his own] directorate”.

The prosecution then asked Vujovic whether intelligence gathered on the ground could have been used by the Bosnian Serbs or by the Serbs in Croatia’s Krajina region “to achieve their war objectives.” The witness replied that he did not know.

Simatovic and Stanisic are charged with having formed and supported units in the Krajina region and with sending police and paramilitary forces from Serbia which took part in crimes against non-Serbs in that part of Croatia.

Vujovic said that he did not observe the activities of the Red Berets on the ground, “save for a few occasions when I noticed that they were there, guarding the locations”. He said his visits to such “locations” occurred “only very seldom, when there was need for it”.