Why Did Cuba Jail This Journalist?

Why Did Cuba Jail This Journalist? 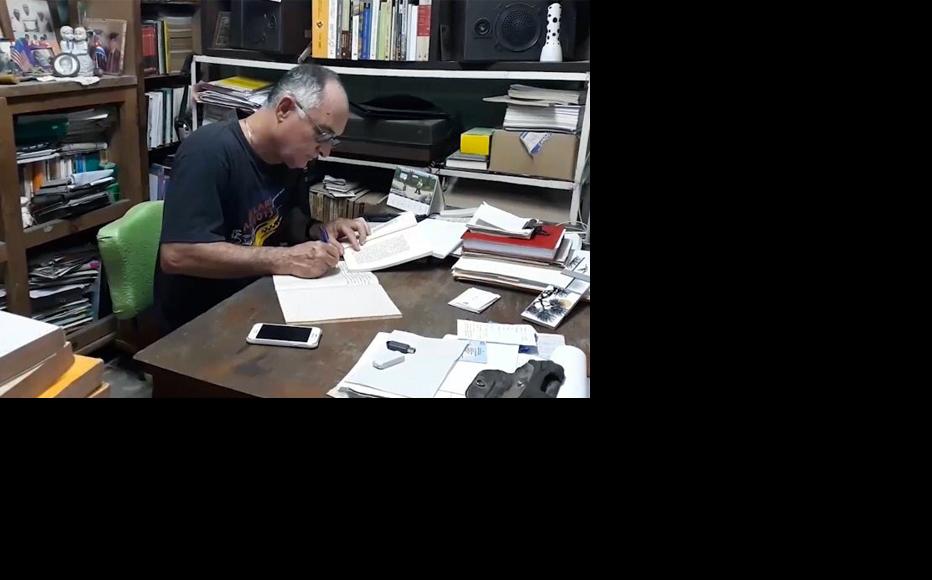 Independent journalist Roberto Quiñones. (Photo courtesy of CubaNet)
The link has been copied

The sentence represents a change in the pattern of harassment used by the Cuban authorities in the last few years, which include arbitrary detentions for hours or even days, intimidations and confiscation of equipment.

But while journalists are routinely intimidated in this way, custodial sentences such as the one imposed on the 62-year-old lawyer and journalist are relatively rare.

Quiñones, who works for digital news outlet Cubanet, was arrested last April when he went to court to interview a couple convicted of “acts against the normal development of a child” after their decision to homeschool their 13-year-old daughter.

The country’s constitution provides only for a secular and state-funded education, and Evangelical pastors Ramón Rigal and Ayda Expósito were sentenced to a year’s house arrest.

Shortly after Quiñones began the interview, two officers from the State Security police approached him. When the reporter asked why, one officer physically restrained him.

“He made me turn my back to him, cuffed me and then he pulled me so violently that I fell and rolled down the small stairs at the main entrance of the court building,” Quiñones told IWPR in an email exchange after sentence was passed but before he was sent to prison.

Quiñones said that he was beaten on the way to the police station.

“While inside the police patrol car, I told the officer he was an abuser and then he started to violently beat me,” Quiñones said. “They broke my lip and the tip of my tongue. They also hurt my left thumb and slapped my face.”

He suffered bad bruising and a perforated eardrum, with his injuries later verified by two independent medical sources.

According to official documents in the dossier for Quiñones’ case, the authorities argued that violence had been “necessary to restrain him and make him obey”.

The journalist was confined to a prison cell for the next five days, still wearing his bloodied shirt. Although he was taken to a hospital where several doctors certified his injuries, he did not receive any medical treatment.

On April 30, the chief military attorney in Guantanamo absolved the police officers who beat Quiñones of any responsibility.

The journalist was accused of resistance and disobedience at the moment of his arrest. In August, the Guantanamo municipal court, on the eastern part of the island, dismissed an appeal and upheld the sentence of imprisonment and community service.

Quiñones was arrested on September 5 and later taken to a prison facility in Guantanamo for refusing to do the community service.

The circumstances of Quiñones’ arrest, his trial and subsequent sentence raised concerns among several international organisations. OneFreePress included it in the list of the ten most urgent cases of injustice against journalist. Amnesty International described him as a prisoner of conscience.

“Quiñones was arrested and beaten while he was covering a trial,” said Natalie Southwick, coordinator of the Central and South America programme of the Committee to Protect Journalists (CPJ). “This injustice is the lowest of the low, even for Cuba, a country with the longest tradition of censorship.”

“During the trial, Quiñones’ legal rights were violated time and time again,” said Laritza Diversent, from human rights NGO Cubalex. “Roberto Quiñones did not have access to an independent court or impartial judges. No one does in Cuba. The judicial system here is subordinate to the government.”

Diversent added that the journalist was not allowed to defend himself or have access to his case file. The evidence he wanted to present was not admitted in court, including   photographs showing his injuries and a record of all the incidents of state harassment he had been subject to over the years.

Cubanet director Hugo Landa said that it was important to understand the context surrounding Quiñones’ arrest, noting the government’s current troubles. President Miguel Díaz-Canel, who assumed the position in April 2019, is presiding over a period of economic crisis.

“The government is weak and afraid, and wants to teach others a lesson using Roberto’s life to intimidate those who raise their voice of dissent or get involved in independent journalism,” Landa said.

Henry Constantín, vice-president for Cuba of the Inter-American Press Association, also believed that there was a direct correlation between the economic crisis the island is facing and the increasing repression of independent journalists.

In recent months, there have been shortages in markets and shops because the government has lacked sufficient funds to buy basic goods in the international market.

Petrol and diesel began to run out in late September because shipments of refined fuels were not being dispatched from Venezuela, Cuba’s main oil supplier.

The scarcity is reminiscent of the Special Period, an extended economic crisis caused by the dissolution of the Soviet Union in the 90s. The bloc was Cuba´s main supplier of oil and a key buyer of products such as sugar.

“Having an independent press poses a challenge to the government, making it harder to control the information flow. This is what explains the severity of these measures,” said Claudia Ordóñez, from the programme for Central America and the Caribbean at Article 19. “The sentence against Quiñones could be used as an exemplary punishment for his colleagues.”

Pressure has been mounting on journalists in recent months. The Press Freedom Association of Cuba (APLP) reported 204 cases of aggression against independent journalists this year, including 20 aimed at women.

Harassment included forbidding journalists to travel out of the country to participate in training programmes or events such as human rights conferences.

On June 25, for instance, the Cuban authorities prevented journalists Ileana Colas and Maricel Nápoles from leaving the island to participate in the General Assembly of the Organisation of American States (OAS).

The reporters had been invited to explain the situation of freedom of expression and the independent media in Cuba.

When they arrived at Havana airport, they were informed by immigration officials that they could not leave the country.

Colleagues said that Quiñones had been fighting for human rights since the 1990s. He was convicted of document forgery and receiving bribes 20 years ago after being accused of complicity with a notary he was defending at the time who had been accused of authorizing a property transaction, something that was forbidden in Cuba at the time.

Quiñones said that he did not work in the office where the law was violated and never had access to any documents. Nonetheless he was sent to prison for four years, a sentence he believes was imposed to deter him from defending activists as a lawyer.

“The Cuban government treats its opponents and also journalists, and even anyone who have a relationship with the opposition or the independent media, as common criminals and accuses them of non-political crimes,” Quiñones said. “This is what they did to me more than 20 years ago, and they are doing it again now.”