Azerbaijan and Georgia need to answer urgent questions about reporter’s kidnapping and imprisonment. 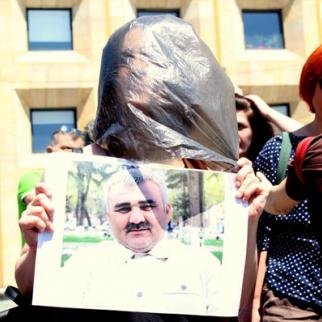 A protester in front of government buildings in Tbilisi, imitating the abduction of Afgan Mukhtarli, reportedly pushed into a car by unknown persons and a bag placed over his head. (Photo: Lib Center)

Azerbaijan and Georgia need to answer urgent questions about reporter’s kidnapping and imprisonment.

Two years ago, prominent Azerbaijani journalist and IWPR contributor Afgan Mukhtarli vanished from the centre of Tbilisi.  That evening he had met a friend in a cafe, picked up some bread on the way back and called his wife Leyla Mustafayeva, also a journalist. His abductors seized him a few blocks from his family’s flat. He never made it home.

Mukhtarli, who had been living in exile since 2015, resurfaced in Azerbaijani border police custody less than 24 hours later, facing fabricated charges of illegal border crossing, smuggling and violently resisting arrest. An Azerbaijani court promptly sent him to pretrial custody and in January 2018, following a hearing that fell far short of international standards, a court sentenced him to six years in prison. The decision was upheld on appeal.

I first met Afgan in 2010 in Azerbaijan’s capital, Baku, where he worked for an opposition daily. I remember him recounting how around 20 Azerbaijani policemen had once attacked and mercilessly beat him as he was covering an unsanctioned but peaceful protest in Baku. Needless to say, they got away with it. Around the same time, I met his future wife Leyla, and interviewed her about the violence she had also faced from the local authorities.

Since then, the government’s antagonism toward independent and opposition media has only grown, with the authorities detaining and prosecuting dozens of journalists and government critics on politically motivated charges. The government now completely controls the broadcast media.

This crackdown is part of the government’s broader effort to silence dissent. This is what Afgan and Leyla sought to escape in 2015, when they moved to Georgia with their two-year-old daughter. From Georgia, Afgan continued his investigative reporting, exposing allegations of corruption in Azerbaijan’s defense ministry and extensive business networks owned by President Ilham Aliyev and his associates in Georgia.

Afgan told his lawyer how he was kidnapped. He said that unidentified men, some wearing Georgian police uniforms and speaking Georgian, stopped him near his house, put a bag over his head, pushed him into a car and beat him as they drove away. Afgan said that his captors changed vehicles twice and that the assailants in the second vehicle spoke Azeri and took him to an Azerbaijani border checkpoint, where someone planted and “discovered” 10,000 euro on him. This became basis for the smuggling charges.

Although the Georgian authorities promptly opened an investigation into the abduction, they claimed that Georgian security services were not involved.

Georgia’s and Azerbaijan’s international partners reacted swiftly. In June 2017, the European Parliament adopted an urgent resolution strongly condemning Afgan’s prosecution, calling for his release and urging Georgia to investigate his alleged abduction and to “bring the perpetrators to justice”. The European Court of Human Rights has also started to review Afgan’s case as a priority and has sent questions to the authorities.

Facing increasing international and domestic criticism, the Georgian authorities suspended a number of counterintelligence and border police officials in 2017, pending the investigation’s outcome.

However, the investigation itself appears to be making little to no progress. Local investigative journalists and members of the Organized Crime and Corruption Reporting Project (OCCRP), an international journalism collective, quickly discovered that the CCTV cameras in central Tbilisi and along the Azerbaijani border that would have recorded Afgan’s passage had been either out of order or had their footage deleted.

Georgian authorities have refused to recognise Afgan as the victim of a crime, which would have allowed his family and lawyer closer scrutiny of the investigation. The authorities have also refused to support requests from Georgian activists and media organisations to establish a temporary investigative commission in parliament to examine Afgan’s abduction and illegal transfer to Azerbaijan.

The lack of any detailed findings in Georgia’s investigation after two years makes the government’s assurances that it wasn’t involved in Afgan’s abduction ring hollow.

In April, in response to a question at the Parliamentary Assembly of the Council of Europe, Georgian Prime Minister Mamuka Bakhtadze stressed the sensitive nature of the case and refused to comment on the ongoing investigation.

Meanwhile, Afgan remains in prison. He has told his lawyer that he has developed serious health complications and has been without access to adequate medical care. Fearing for their safety in Georgia, Leyla and their daughter fled the country in October 2017 and received asylum in Germany.

The governments of Azerbaijan and Georgia share responsibility for Afgan’s situation. Azerbaijan should free him immediately and allow him to rejoin his family. And Georgia should ensure that the protracted investigation is effective by appropriately prosecuting all those responsible, regardless of nationality or official position.