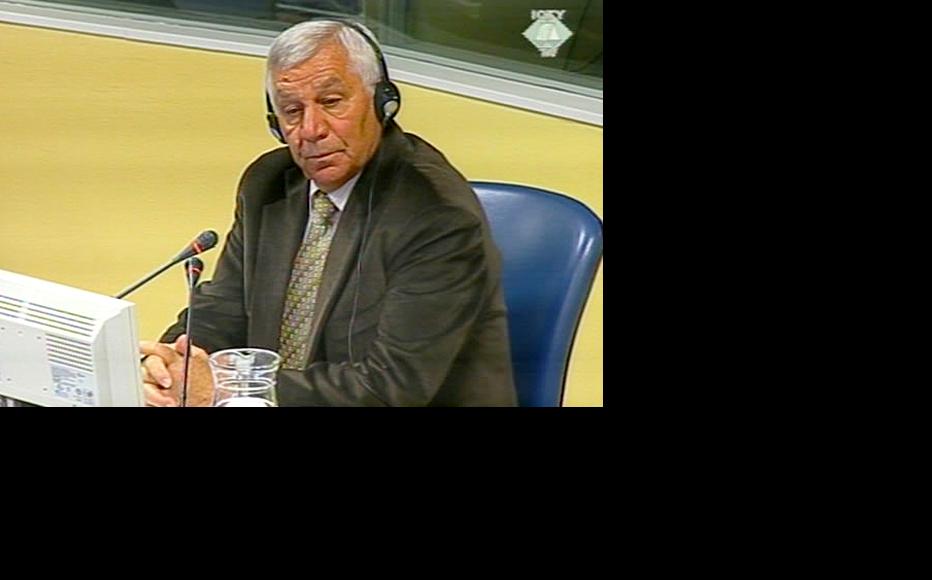 Prosecution witness Aleksandar Vasiljevic in the ICTY courtroom. (Photo: ICTY)
The link has been copied

A former general in the Yugoslav army told the Hague tribunal this week that the Croatian Serb civilian authorities were aware of crimes committed by Serb paramilitary units during the war in Croatia.

Prosecution witness Aleksandar Vasiljevic, regarded as a key figure in Yugoslav military counter-intelligence during the period covered by the indictment, was testifying in the trial of former Croatian Serb political leader Goran Hadzic.

Hadzic is charged with 14 counts of war crimes and crimes against humanity committed against Croats and other non-Serbs during the war in Croatia in the early 1990s, including persecution, extermination, murder, imprisonment, torture, inhumane acts, cruel treatment, deportation, wanton destruction and plunder. He is alleged to have been part of a “joint criminal enterprise” with other political and military officials, whose purpose was the “permanent forcible removal of a majority of the Croat and other non-Serb population from approximately one-third of the territory of the Republic of Croatia” in order to create a Serb-dominated state.

During the conflict, Hadzic held senior political positions in Serb-held parts of Croatia, and he was president of the Republic of Serb Krajina, or RSK, from February 1992 to December 1993.

Vasiljevic's testimony focused on the roles and powers of the Yugoslav army deployed in Croatia, of the civilian authorities in the Croatian Serb entity, and of the accused as president of RSK.

"Whenever the JNA [Yugoslav army] would receive any findings on any crimes, we would immediately transfer this information to the competent civilian authorities, and I know that local authorities were always informed on the crimes committed by paramilitary units", Vasiljevic said, adding that he did now know why they did not do anything about them.

"By reporting these crimes, we did our job. What happened from there on was not our responsibility.”

The witness said the JNA was aware of its jurisdiction and operated within it.

"The army knew what it had to do and how it had to do whatever it had to do. It would be ridiculous for army commanders to go asking, not within their chain of command but to some local self-declared regions and their self-declared leaders, about what they had to do," Vasiljevic said.

Shown a document by the prosecutor – a decree from the Croatian Serb government "allowing" the JNA to disarm a paramilitary unit, he commented, "What they could and should have done was – if they weren't able to cope with the paramilitary units – then simply ask the JNA for help."

According to Vasiljevic, it was the local civilian authorities who were supposed to launch investigations when members of paramilitary units were accused of crimes, just as it was "natural for the JNA to court-martial its own members involved in such events".

To illustrate this point, Vasiljevic referred to the 1991 massacre of Croat civilians in Lovas, a Serb-held village in Eastern Slavonia. Four JNA soldiers involved were tried before a military court. As for the paramilitaries involved in the same atrocity, Vasiljevic said they should have been brought to justice by the RSK authorities, but this apparently did not happen.

During the cross-examination, Hadzic's defence questioned the objectivity of the witness, since he had described himself as a "proud member of the JNA".

Vasiljevic insisted his testimony was objective, because the passage of time had helped him understand what had happened in Croatia in 1991.

A number of documents presented by the defence suggested that paramilitary leader Zeljko Raznatovic (known as Arkan) and his forces were not in fact subordinate to Hadzic and his civilian government, but rather to the JNA. One such document named Arkan and his unit as a "legitimate part of the Novi Sad Corps of the JNA, while another document referred to him as commander of a military unit for "special tasks".

Arkan was indicted by the Hague tribunal, but was gunned down in a Belgrade hotel in 2000 before he could be arrested and brought to The Hague.

The witness dismissed the Novi Sad Corps document, saying it carried no legal weight. He said it was the “intention” of corps commander Andrija Biocevic to portrays Arkan and his men as a “legitimate JNA unit”, but he dismissed Biocevic as “a drunkard and a fool” who “endangered both his own personal standing and that of the entire army”.

To dispute the witness's claim that the local civilian authorities rather than the Yugoslav army were supposed to try paramilitary crimes, the defence presented a document signed by Zivota Panic, at the time commander of the JNA’s First Military District, whose mandate included parts of Croatia. This document states that "anyone carrying out crimes in the area of responsibility of the district must be arrested and legal measures taken against him".

To this, Vasiljevic replied that Panic was quite a "well-intentioned man" but that he was not a lawyer and had therefore used the word "arrested" instead of "detained", which is what the JNA could have done. Also, he said, "legal measures" did not automatically imply actions by the military.