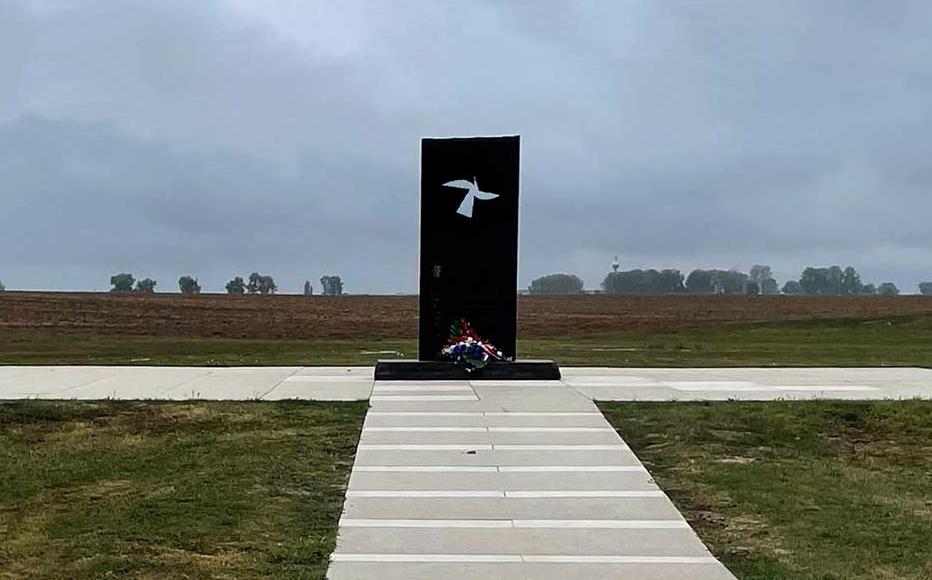 A black marble monument has marked the site of the Ovčara mass grave since 1998. © Alan Davis 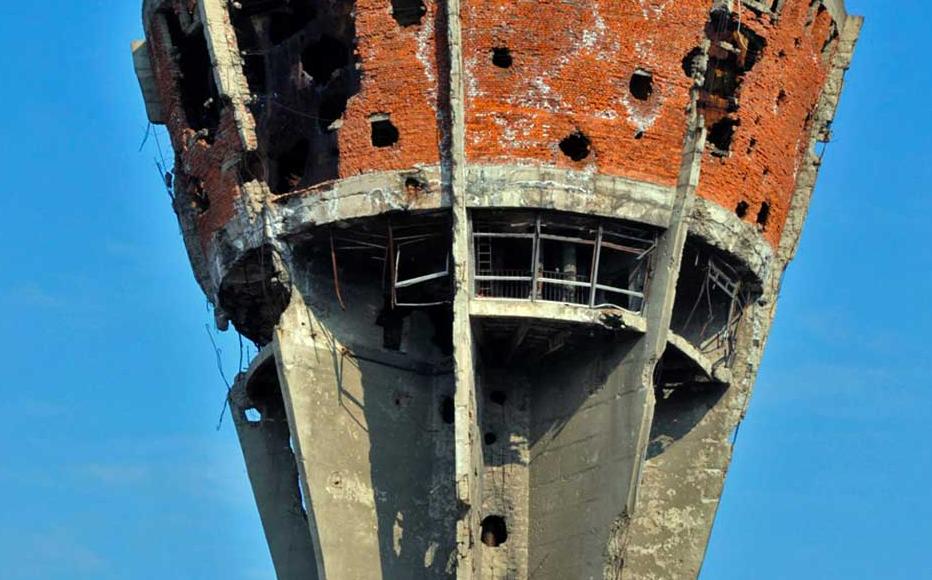 Vukovar water tower and the city itself were largely destroyed by the Yugoslav People's Army (JNA) between August and November 1991. © Anjči/Wikimedia
The link has been copied

Thirty years ago, in early September 1991, a colleague and I walked through the no-man’s land and into Vukovar.  I will never forget the eerie loneliness of the cornfields beneath clear skies and the absolute silence as we approached the frontline from Croatian-held Sotin.

Stretching along the banks of the Danube, Vukovar had been surrounded and cut off from the rest of Croatia since mid-August. Scottish photojournalist David Pratt and I, both young freelancers, were determined to try and get into Vukovar having heard it was becoming the focal point of a crisis that seemed to be signalling the rise of nationalism and the break-up of Yugoslavia.

A few days before, two Russian journalists had driven along the exact same road as we were walking on and had simply disappeared. To this day, they have never been found.

Dominating the route into Vukovar were three Yugoslav T54 tanks, all with clear lines of fire into the city. As we approached, walking slowly and carrying nothing in our hands, the hatches went down and one turret turned toward us.

The soldiers seemed just as nervous of us as we were of them but they held their fire.

The commander turned out to be quite friendly: he knew nothing about any missing Russians but advised us to turn around and go back, given that the Croats up ahead would likely shoot first and ask questions later. He added that he didn’t have any problem or issue with an independent Croatia breaking away from Yugoslavia: It was just that Vukovar couldn’t be part of that. It belonged to Serbia.

The captain gave us four cans of army rations and wished us luck as we decided to take our chances.  A mile further on, the road descended into a small wooded copse where a dozen or so large anti-tank mines, only partly covered by straw, blocked the road. A few hundred yards further on, the woods opened back up again into fields and from the more distant treeline, the first Croatian defenders of Vukovar jumped out on us. 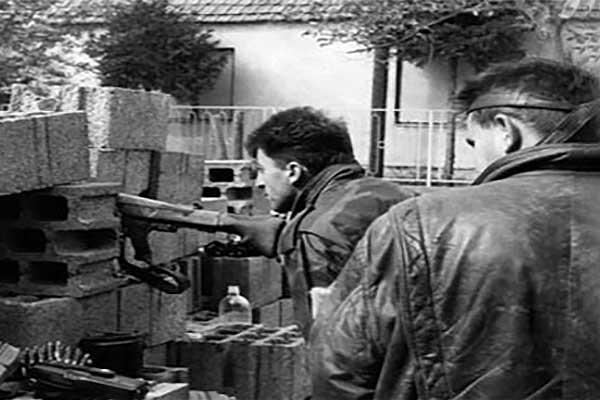 The road into town was blocked off by makeshift walls of breeze-blocks - which probably wouldn’t have stopped much more than a bullet from an AK47 - and guards with heavy duty M50 machine guns, thick leather jackets and Rambo-style black ribbons around their hair.

David and I were the last international reporters to reach and report from inside Vukovar - and we were very lucky to get out a week later when we did.

Exactly 30 years ago today - on November 18, 1991, the town fell to the Yugoslav Army (JNA) and Serbian paramilitary forces that had spent three months steadily terrorising its population and reducing it to rubble.

In just 87 days, it was turned from a pretty red-tiled, partly mediaeval and prosperous town into site of devastation.

Some 1,800 lightly armed Croatian national guardsmen and volunteers were totally outnumbered and outgunned by those who sought to claim the town and its surrounding fertile farmland as part of a ‘greater Serbia’.

Towards the end, a reported 12,000 tank and mortar rounds were being fired into the town daily. While the exact number of civilian and military casualties will never be known, most estimates put it between 2,500 and 3,000. Almost 100 children were killed; the youngest victim, Ivan Klajic, was just six months old.

I often wonder how many shells that friendly tank captain ordered fired and how many people his soldiers killed.

Following a surrender monitored by EU representatives, civilians emerged from of their cellars and were marshalled out of town and past the victorious and jeering lines in pitiful ragged columns reminiscent of so many World War Two newsreels.

That surrender should have seen the end of Vukovar’s tragedy. Sadly, it wasn’t. Despite the presence of the European Commission Monitoring Mission (ECMM), 300 patients and staff from the Vukovar hospital were taken to a nearby pig farm in Ovcara by Serbian paramilitaries. From there, over a period of six hours, small groups were bussed about a mile further into the cornfields and up to a small natural dip in the land. There they were lined up and massacred.

I returned to Vukovar just a few weeks ago for the first time since 1991 for a BBC Scotland documentary on the break-up of Yugoslavia as seen through the eyes and photos of David who recently completed a similar programme on his time covering Afghanistan.

A key goal of the visit back was to try and identify and find what happened to some of the people we met and David had documented in his photos.

The upcoming documentary, to be broadcast in the New Year, begins with our return to and recollections of the town and our sense of what it symbolised - not so much for us as for Croatia and the collapsing Yugoslavia.

One can’t help wondering whether, if the international media and community had engaged much, much more on Vukovar at the time, would the conflict have taken a different path in some way? Might the story have turned out differently in Sarajevo and elsewhere?

After the two of us filed our pieces for the likes of the Glasgow Herald and Scotland on Sunday, we decided to leave while we still could. The fighting was getting worse, and this time we crept out through the cornfields with the help of Croatian soldiers.

Back in London, I spent a few fruitless weeks trying to generate media interest in what I had seen during the siege and what I feared was to come.

In Vukovar, while we spent much of the time sheltering alongside the town’s inhabitants in the basement of the Hotel Dunav, we met a Croatian cameraman who showed us a video he had shot of a tractor trailer full of dead bodies. They all appeared to be civilians.

There had just been a reported series of summary killings of Croatian villagers on the outskirts of the town, and his film certainly seemed to provide proof of this.

But it was in the days before email and the internet. The only way of trying to copy his tape was to find a video rental shop that was still open, a ridiculous prospect amid ferocious mortaring, shelling from gunboats on the Danube and bombings from JNA aircraft. So that tape was never copied and the potential evidence never brought to back to London.

I was never able to convince the BBC or ITN to understand that Vukovar was a story worth covering.

The closest I got was an appearance in October on a Channel 4’s Right to Reply which saw me ask some key editors and producers why they weren’t trying to report on Vukovar.

The responses were pretty much all the same. What and where on earth, they asked, was Vukovar and why should people in the UK even care? International stories were way more expensive to cover than national stories; they were far less popular with the viewers.

It was amazingly sad and disheartening to hear.

Ironically, the week that Right to Reply was broadcast, the Yugoslav army started shelling the historic port of Dubrovnik. Given that so many Brits had visited it as tourists, Yugoslavia finally starting getting coverage on the news. Ancient port buildings and historic walls, it seemed, mattered a lot more than human lives.

Vukovar’s tragedy and the Ovcara atrocity happened when neither the international community nor the media were looking or cared. So the pattern was set: what happened there was to be reflected and replicated again and again in Bosnia over the coming years.