Interim government must set aside differences and focus on stability, analysts say. By Anara Yusupova and Asyl Osmonalieva in Bishkek

Interim government must set aside differences and focus on stability, analysts say. By Anara Yusupova and Asyl Osmonalieva in Bishkek 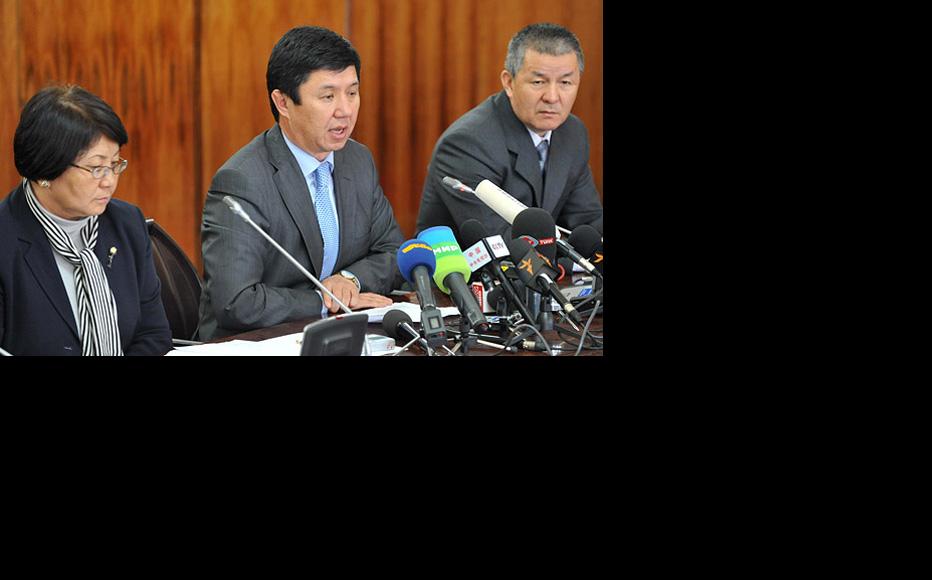 Kyrgyz leaders sit together for now, at least. Picture by Anara Yusupova
The link has been copied

The interim government in Kyrgyzstan has the right credentials to provide a representative leadership but must move fast to deliver stability and cohesive government, analysts and civil society representatives say.

They are critical of the administration’s failure to prevent the land seizures which sparked violence in recent days, and pointed to a lack of coordination in policy statements made by various senior figures. There is a risk, they say, that personal ambition and partisan interest could undermine effective leadership at a time when cohesion is essential.

The interim administration swept to power following mass demonstrations on April 6 and 7 , and the departure of Kurmanbek Bakiev as president, is drawn mainly from the three leading opposition parties.

Analysts say one factor in the government’s favour is more inclusive than its predecessors, especially since it includes representatives of both north and south Kyrgyzstan – regions traditionally seen as uneasy rivals for power.

Otunbaeva and Tekebaev hail from the south, for example, while Atambaev and Sariev are northerners. Regional allegiances do not now appear to be a source of division, given that Otunbaeva and Atambaev belong to the same party.

“There are now very diverse politicians in the interim government – they represent different regions and come from varying professional backgrounds,” said leading political analyst Alexander Knyazev. “That means they have a fairly broad support base among the population, albeit a chaotic one.”

Knyazev believes this range of experience will contribute greatly to government – provided, that is, that they remain united.

Bakiev left Kyrgyzstan on April 15 and is now in exile in Belarus.

After the new government was hurriedly put together, it succeeded in setting an October date for elections, mapping a process of radical constitutional reform, and opening up channels of communication with major partners like Russia and the United States.

At home, however, it stands accused of not acting swiftly or resolutely enough to restore order to a chaotic situation that threatened to run out of control, and caused some analysts to predict a wider descent into conflict.

Five people died and 40 were injured on April 19, according to interior ministry figures, as police moved in to disperse several hundred people who had seized land around the village of Mayevka on the outskirts of the capital Bishkek. The invaders attacked and burnt a number of homes belonging to local villagers.

Meanwhile, in Jalalabad in the south of the country, Bakiev supporters who invaded local government offices and a television station earlier in the week clashed with police on April 21.

The day after the violence in Mayevka, Otunbaeva issued a statement in which she warned that police were under orders to open fire on anyone attacking people, private property or facilities such as military bases.

Some of those involved in the land invasions claimed to have taken part in protests against Bakiev, and felt they were therefore justified in taking land plots as the spoils of victory.

Gulnur Abazbekova, from the office of Kyrgyzstan’s human rights ombudsman, warned the authorities not to give in to such demands.

“The interim government must make its position clear on this,” she said.

Tatiana Vygovskaya, a conflict studies expert and director of an NGO called Égalité, agreed that firm measures were necessary.

“The mob needs to know there’s a deterrent,” she said.

Tolekan Ismailova heads the NGO Citizens Against Corruption, and has joined an independent commission set up to investigate the unrest that preceded the change of government. In an interview for the online news agency 24.kg, she noted that Mayevka is home to ethnic Russians and Meskhetian Turks as well as Kyrgyz, and that it seemed to be the homes of non-Kyrgyz that came under attack.

“It’s the authorities’ duty to halt such attempts at destabilisation immediately,” she said. “There is no place in our country for supremacy for the titular nation [Kyrgyz] or the denigration of ethnic minorities.”

The violence, she said, was a sign that “social tensions are running critically high”.

The allocation of top jobs in government has raised doubts whether former opposition politicians will be able to work as a team. Analysts also question whether the new authorities will manage to co-opt officials and public servants from the Bakiev administration, and how sub-national government will be managed.

Civil society groups have begun to speak out about what they see as attempts by political parties on the winning side to stake out their territory.

“All government appointments resemble a competition between the Ata Meken and Social Democratic parties,”said Cholpon Jakupova, head of the Adilet human rights centre.

Leading Social Democrats were appointed to the acting posts of health minister, mayor of Bishkek, and governors of the Issykkul and Chuy regions, both in northern Kyrgyzstan. The ministers for internal affairs and emergency situations and the head of the state property agency came from Ata Meken.

Tattu Mambetalieva from the Civic Initiative for Internet Policy says that systematic monitoring of post-Bakiev appointments shows that 80 per cent of public-sector posts from the top leadership to school and nursery directors are going to the two parties.

Speaking at a meeting  between interim leader Otunbaeva and civil society organisations on April 17, Mambetalieva warned that this could affect the next elections, giving Ata Meken and the Social Democrats an unfair advantage.

The civil society groups held a  separate meeting among themselves, after which they passed a resolution expressing concern about such partisan appointments, about the general instability that undermined public confidence in government, and about the rise in ethnic incitement.

As well as political parties advancing their interests, individual leaders have been making their move.

“There are as many ambitions as there are leaders,“ said politics-watcher Mars Sariev.

Knyazev said many of the leading figures catapulted into government might be hoping to become president. At the same time, he said, they are conscious of the risk that whoever gets the top job could end up seeking untrammelled power just as Bakiev did.

Bakiev became president after the “Tulip Revolution” of March 2005, replacing Askar Akaev who fled Kyrgyzstan and went into exile. At the time, Bakiev was promising democratic reforms and was allied with the opposition forces that have now replaced him. Once president, however, he lost their support as he concentrated power in his own hands.

According to Knyazev, that was a salutary lesson for today’s leaders. “Now they even fear each other, as they’ve seen what can happen from their experience with Bakiev.”

Analysts are hopeful that the mould will be broken by a new constitution which is to be drafted and put to a referendum before the October elections. The plan, as outlined by Tekebaev on national TV, is to reduce the powers of the president and strengthen parliament so as to minimise the risk of authoritarianism.

Knyazev approves. “Kyrgyzstan needs a distribution of authority between the branches of power that heads off the impulse for [absolute] leadership,” he said.

Sheradil Baktygulov, a Bishkek-based expert on public administration, argues that any reform of governance should also include devolution of power to Kyrgyzstan’s regions, which he believes could play a stabilising role.

“Thus far, the authorities are more preoccupied with distributing functions among the president, parliament and judicial system; with constructing the architecture of power in the centre,” he said. “Virtually no one is paying attention to the system of public administration and [local] self-government.”

At times, members of the new leadership have sent out radically different messages.

After Otunbaeva’s deputy Atambaev appeared to question the wisdom of allowing the United States to continue using a military airbase outside Bishkek, the acting prime minister had to reinforce her earlier assurances that the new Kyrgyz administration would honour an agreement with Washington allowing the base to be used as a transit route to supply US and its allied forces in Afghanistan.

Following Atambaev’s remarks at an April 12 press conference, Otunbaeva gave an interview the next day saying the annual agreement with the US which expires this July would be automatically extended.

Another example of mixed messages came after members of the police staged meetings to demand resignation of newly-appointed acting interior minister Bolotbek Sherniazov, who is deputy leader of Ata Meken. Police in the southern city of Jalalabad held a protest on April 17 and two days later similar actions took place in Osh and Bishkek.

The response from government was confusing and did little to defuse the situation. On April 19, a press release sent out from the email address of Edil Baisalov, head of the prime minister’s office, said that Sherniazov had been replaced by his deputy Bakyt Alymbekov, a career interior ministry officer.

But the next day, a government spokesman and the interior ministry denied this, saying Alymbekov was merely deputising for Sherniazov, who was unwell but would remain minister.

While some analysts see such statements as worrying examples of incoherence, Baktygulov is more forgiving, suggesting that they are merely the teething troubles of a new administration that is still taking shape.

Amidst the ambitions that are emerging among the new political class, Mars Sariev sees Otunbaeva as a stabilising force.

“She’s a compromise figure, an experienced politician who isn’t associated with any clan, and a woman who lets men get on with competing among themselves,” he said.

If government disunity leads to a situation where the administration loses credibility at home and abroad, the consequences would be grave, Sariev says. Then the administration could rapidly face a challenge from domestic forces impatient with its inability to create stability.

“For example, there are the young people who made this revolution happen, and bureaucrats who are sidelined. They will start criticising the interim government’s actions, and portray it as a government that does not reflect people’s interests,” he said.

Although Bakiev is far away in Belarus and has indicated he will not be returning, Sariev warned that some of his supporters still in the country could seize on any perception that the government is disunited or weak, and mobilise support against it.

Anara Yusupova is a pseudonym for a journalist in Kyrgyzstan, Asyl Osmonalieva is an IWPR-trained reporter.