A young woman's dreams are shattered by the war.

A young woman's dreams are shattered by the war. 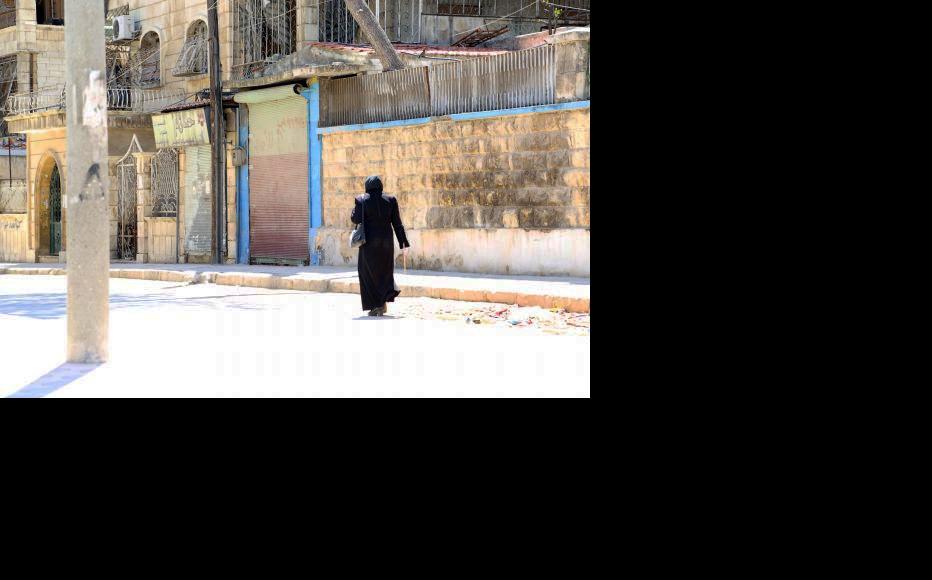 A woman walking through the Saif al-Dawla neighbourhood. (Photo: Hussam Kuwaifatiah)
The link has been copied

I was sitting drinking coffee with my sister-in-law one day during a family visit when she mentioned that a relative of hers was looking for a bride. She suggested that he might be a good match for our daughter Samaher.

I asked my husband if he would allow Samaher to get married. She was 17 years old at the time and had been unable to finish her studies because of the war. My husband didn’t rule it out and suggested that the potential groom come to visit us with his family.

Two days later, my sister-in-law called me and told me when the groom – named Khaled – and his family would come. On the day they were due to arrive, Samaher cleaned the house to welcome our guests. Like other girls, she wanted to get married and have a family. That evening, the groom and his family came along with my husband’s relatives. We all sat down and my daughter served food before joining us.

After my husband, Khaled and his family had chatted a little, my husband asked about his potential son-in-law’s work. They told us that Khaled was a military commander in the Free Army, that his financial situation was good and that he had his own house. He was also from al-Madiq village, which was not far away from us.

The groom’s proposal was accepted and Khaled and Samaher got engaged. They seemed meant for each other. I was very happy that my daughter was now betrothed and that her life would be better than ours. She had always wanted to buy so many things that we had to refuse because we were too poor.

Khaled was 14 years older than my daughter but he was a good, honourable man and Samaher grew very attached to him. She would frequently call her fiancé to talk about their future life. He used to visit us often as he also was very fond of Samaher and grew to love her. I was so happy about that. We sat with Khaled for many hours and I felt as if he was one of my own children.

Every time he went into battle, Samaher cried bitterly; she was scared for him. I tried to calm her and remind her that many young people were doing the same to protect us and free us from the Assad regime.

Eventually, Khaled’s parents set the wedding date for their son and my beautiful Samaher. The marriage was to take place in spring. Samaher began preparing herself and bought clothes and other items. She was very happy, she loved Khaled so much even though they hadn’t been engaged for long.

On the week of the wedding, as Samaher, her sisters and I were arranging her trousseau, Khaled called and told her that he was going to fight in the Aleppo countryside for the next two days.

“I won’t be late,” he said. “On Tuesday I will be back and our wedding will be on Thursday, as we planned.”

Sobbing, Samaher begged him not to go.

He told her, “Forgive me, dear, I can’t neglect my duty.”

Samaher began beseeching me, “Please mother, call him and convince him not to go!”

I tried to calm her down, telling her I was sure he would be safe and that we could not prevent him from going. She knew that he was a fighter and it was pointless trying to stop him from doing his job, either now or after they got married, especially since it was heroic and for the sake of our country. My words soothed her a little and she went back to organising her things.

The next day, Khaled’s mother came to visit and check on the wedding arrangements. She told Samaher, “In just a few days, you will be my son’s wife”. Samaher smiled shyly. After Khaled’s mother left, we had dinner.

Then the evening came, and a great sadness came with it. A relative called and told my husband that Khaled had been killed during the fighting. He was shot and died.

I was standing next to him and asked, “What’s wrong? This is the first time I’ve ever seen you cry.”

“Khaled was martyred in Aleppo,” he replied.

What could I say to Samaher, who was preparing to marry the man she loved? I went to her room and asked her, “Samaher, what are you doing?”

“I’m trying to call Khaled, but he’s not answering,” she responded.

I cried and hugged her tightly. I told her, “My daughter, don’t be sad.”

She pushed me away and said, “Mother, what’s wrong with you? Did anything happen to Khaled?”

I was silent and couldn’t answer.

She ran to her father and asked him, “Father, what happened to Khaled?”

Her father told her the sad news. Samaher collapsed on the ground.

She cried and said, “I said goodbye to him and I knew that it was our last goodbye. Why did this happen?”

My husband said, “Your mother and I are going to visit his parents, do you want to come with us?”

She said, “How can they bury him without me seeing him first?”

We entered Khaled’s family home and his mother hugged Samaher and they cried together.

Khaled’s mother asked her, “Samaher, will the groom come?”

My daughter answered, “Yes, he will come and fulfil his promise.”

They wept so much.

Amid the shouting and crying, they carried the martyr in and set him down in the middle of the room. His family looked at him for the last time, but Samaher could only watch from a distance; she didn’t want to see him in such a condition. She hugged me tight and we cried together.

They took Khaled and buried him. It was a bitter spring that year, tainted with the unfinished story of Khaled and Samaher.

Hala al-Abdullah, 48, is married with seven children. Originally from Hazarin village in Jabal al-Zawiyeh, she currently lives in Maar Tahroma.