Both sides try to wear the other down, with neither able to strike the knock-out blow. 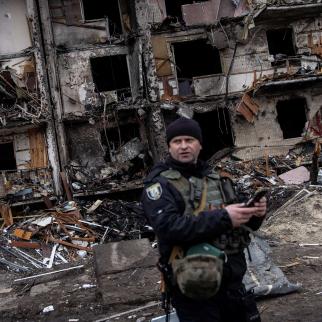 A Ukrainian police officer stands in front of a bombed out residential block hit by an early morning missile strike on February 25, 2022 in Kyiv, Ukraine. © Chris McGrath/Getty Images

Hope for Justice in Ukraine?

Experts warn that political manipulation and lack of funding may hinder the chances of holding perpetrators to account.

Both sides try to wear the other down, with neither able to strike the knock-out blow. 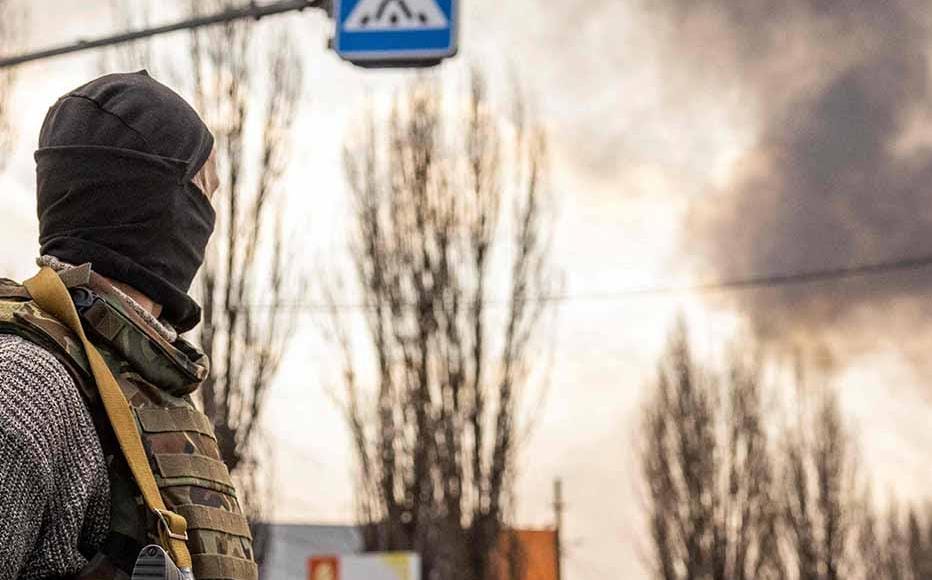 A Ukrainian serviceman stands guard near a burning warehouse hit by a Russian shell in the suburbs of Kyiv on March 24, 2022. © FADEL SENNA/AFP via Getty Images
The link has been copied

The stress showed on the face of the senior Ukrainian defence official, late to a meeting in Lviv.

He had been to visit the bombed-out military base in Yavoriv, where 35 people had died in shelling the week before. The next morning, Russia would hit an aircraft repair factory nearby.

A fierce advocate of his president’s call for the West to do more, the official - who asked to remain anonymous - was not impressed by the arms offered so far, despite Washington’s fresh 800 million US dollar allocation.

“It’s all Soviet stuff,” he said, his frustration clear.

In fact, that aid focuses on critical Javelin anti-tank, Stinger anti-aircraft and other weaponry which the Ukraine forces have used to great effect to impede Russian air capacity. Britain has also announced a further military aid package. But the defence official’s comments are revealing of Ukraine’s military challenge.

Amid the humanitarian tragedy, most military analysis – including from the White House – has highlighted stalemate. Ukraine cannot push Russia back, but Russia cannot do much more than spread destruction and fear. No one is winning, but no one is losing soon either. In a war of attrition, the question is who can last longest?

Ukraine has dislodged Russian forces from positions around Kyiv, and the capital seems spared from direct attack for now. Ukrainian civilian resilience remains solid. The coastal town of Mykolaiv is battered but still holding, as is Kharkiv.

Six Russian generals are reported dead. NATO estimates the number of Russian casualties – killed and maimed – at around 40,000, a seriously debilitating percentage of Russia’s overall deployment.

Yet Moscow’s revised strategy – a steady policy of terror and annihilation – is suited to its capabilities and past practice. A final capture of Mariupol would offer the prized land bridge to Crimea. Russia forces could then join an attack on Odesa.

Forces could also divert northward, squeezing Ukrainian troops in the east and threatening serious losses. Daily bombardments continue across the country, and Ukrainian casualties must also be significant.

With NATO ruling out direct intervention, and keen not to escalate the conflict with game-changing arms transfers, the military balance seems unalterable.

“We are looking for absolute support from NATO, not half support,” said Maksym Kozytskyy, head of the Lviv oblast military administration. “If it is necessary to close the sky, please close it. If weapons are needed, please send them. We will do the rest.”

Yet as this week’s NATO meeting attended by US President Joe Biden underlined, the reality is that the West is very directly involved – through ever-increasing sanctions, through arms and aid supplies and through its own military posture.

The announcement to bring forward more NATO troops will not only give confidence to bordering states but also compel Moscow to mind its back and consider its own internal deployments outside of Ukraine.

Extensive real-time intelligence gathered by NATO is certainly being made available to the Ukrainian forces, to guide targeting, planning and deployments.

In fact, as Eliot Cohen has written in The Atlantic, the war is being waged by two coalitions: Russia and its undermotivated army plus a half-hearted Belarus, assorted Chechen auxiliaries and purportedly some Syrians, against a highly determined Ukraine, with the industrial support of the US, Canada, UK, EU and Turkey, plus some 20,000 international volunteers.

Ukrainians will always want more. The call for a no-fly zone continues, from officials and demonstrators alike. Earlier there was hope that 28 MiG-29 fighter jets offered by Poland could be game-changers.

Both options are firmly off the table. Each response is calibrated, balancing Ukrainian needs and abilities with escalation risks and threats. These include direct engagement of NATO forces against Russia (with a no-fly zone), the use of chemical and biological weapons (if arms supplies surpass some trigger level, such as the MiGs) or the use of tactical nuclear weapons (if Putin is cornered and goes reckless).

European states are also concerned about depleting their own weapons stocks, looking to the US or others to backfill – that is, replace and upgrade – essential weaponry provided to Ukraine. They cannot neglect their own defence and collective NATO commitments.

But the key criterion is, what can the Ukrainians actually use?  Much critical weaponry has a high training burden, and in a situation where intensive fighting brings daily casualties, all soldiers are required at the front, so there is no time to learn.

“Some Ukrainians have this,” said Jack Watling of the Royal United Services Institute in London, “but not too many.”

Similarly, the Starstreak man-portable anti-aircraft missile system, known as a MANPAD, requires 1,000 rounds in a simulator.

“Ukrainians don’t have a simulator. So we could give them the good stuff, but they couldn’t use it,” Watling said.

Western trainers cannot, at least officially, deploy within Ukraine, while bringing Ukrainians out for training, such as to Poland, would be likely to expand as an increasing option as the war extends.

“The less we talk about it officially, the more we can do under the carpet,” noted analyst Tomasz Smura of the Pulaski Foundation in Warsaw.

That means Soviet-era weaponry is preferred. Slovakia pledged to send its S-300 air-defence system although this was stalled after Russian foreign minister Sergei Lavrov threatened to attack any supply effort.

Simple out-of-the-box equipment is also high on the list. The new US provisions include not only rifles, shotguns, machine guns and bullets, but 6,000 AT-4 anti-armour systems – single-use, shoulder-held weapons that territorial defence can deploy against incoming vehicles in case of urban street fighting.

NLAW anti-tank weapons, straightforward to operate, have been sent in large number by the UK and other western states. Ukraine forces are expert in using the famed Turkish Bayraktar TB2 anti-tank drones.

Russia will also be grappling for supplies. Not only does it face the challenge of long and vulnerable supply lines for basic items like food, which the Ukrainians have targeted, but may also be running low on essential weaponry.

“They probably are running shy of those,” he said. “The supplies are finite, and they will be finding . . . that their ability to fire them is far greater than their industry’s ability to ramp up production because they are very sophisticated.”

He noted that most missiles were launched from Russian or Belarussian territory or the Black Sea, not the air. The fall back will be on tanks and artillery.

This sharp reality, then, focuses on the one area Russia was supposed to have the clear superiority in: soldiers. With more than 150,000 deployed, and backed by one of the largest active armies in the world, the sheer numbers should overwhelm.

In the event, Russian troops have proven vastly undertrained, poorly coordinated and badly led. Overall performance has been been “abysmal,” according to RUSI’s Watling. Motivation and morale are believed to be very low, and the food poor. The contracts of serving conscripts are believed to come up for renewal next month, and a compelled extension may not go down well

“Because of a shortage of trained, professional (motivated) personnel, if Russia is going to fight this long war . . . they are going to have to create almost an entire new army,” argued Phillips O’Brien of St Andrew’s University.

This contrasts with Ukraine’s highly motivated army, and what Lviv mayor Andriy Sadovyi has referred to as Ukrainians’ “extreme capacity for sacrifice and self-organisation.” While the entire male population is unable by law to depart the country, most do not wish to. It is not uncommon to see young Ukrainian men at the border returning to serve.

Even if they do not possess every modern weapon they would prefer, their enthusiasm is encouraged by an operational ethos that allows for local initiative, making them flexible and creative on the ground.

A war of attrition is attritional for both sides. If Russia can encircle Kyiv and Kharkiv, it will try to starve them into submission. If not, it will remain vulnerable to attack and continued logistics and supply challenges, all from the ground weapons Ukraine does receive.

But in the end, after all the blood, sweat and arms transfers, the course of the war will come down to one man.

“The price of trying to bring a decision on the battlefield could be an escalation you’re not sure you can manage, or terrible damage and loss of life,” Barrons said. “So this shifts the focus to attrition, breaking Russian will, combined with holding the line in Ukraine. If Putin is in charge, we just can’t tell whether Russia is going to double down or not."