The Ukrainian army is slowly gaining ground with the aim of cutting Russian supply chains. 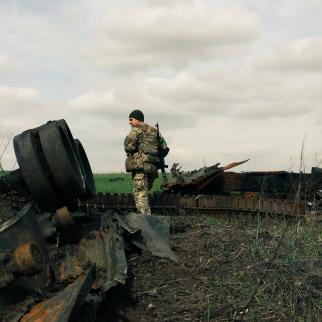 A Ukrainian soldier walks near a destroyed Russian tank in the village of Gusarovka, in Kharkiv region. © Anatoliy Stepanov

The Ukrainian army is slowly gaining ground with the aim of cutting Russian supply chains.

A key bridge over the Dnipro river - which divides the Russian-occupied city of Kherson from the rest of the southern Ukraine region - has been hit by Ukrainian rocket fire as momentum builds for a counteroffensive.

The Antonivskiy bridge was badly damaged in the July 26 night strike, although there was no specific mention of the attack in the regular morning briefing by the general staff of Ukraine.

“We are destroying not infrastructure, but the enemy's plans,” Natalia Humenyuk, spokeswomen of the southern operational command, said in a statement. “The work of our artillery is so deft and precise that it is aimed mostly at the demoralisation of the military.”

The Russian forces initially claimed that the bridge, which provides a lifeline for their troops in the Kherson region, had not been damaged. Within hours, however, they announced that it was closed to traffic, with no indication as to how long repairs might take.

“There are only two bridges, near Kherson and near Kakhovka to supply the Russian forces,” he continued. “If both were destroyed, the forces on the Dnipro’s right bank would be in a cauldron.”

He added, “The Ukrainian forces have taken several villages from where they could destroy or shell these bridges.”

Also on the morning of July 27, the general staff reported the liberation of two villages in the Kherson region and the rollback of Russian forces from three more.

“What is going on in the Kherson region now means that the battlefield for a counteroffensive is being prepared,” said Mykhailo Samus, deputy director of international affairs at the Kyiv-based Centre for Army, Conversion and Disarmament Studies.

The Ukrainian political leadership, including President Volodymyr Zelensky, have made several recent statements predicting that the southern regions would soon be liberated.

“They are switching to defence; we are building up forces for an offensive.”

Yuriy Fyodorov, a Russian military expert currently based in Prague, said that the military situation in Kherson and Zaporizhia vvc was a political issue for both sides.

“The Ukrainian armed forces are moving slowly but persistently towards Kherson,” he continued. “The main aim, I think, is to obstruct… efforts related to the intended annexation of the Kherson region.”

In mid-May, the Russian-installed regional administration of Kherson and Zaporizhia announced that it supported the region’s annexation to Russia, with referendums planned for the autumn.

“The Ukrainian advance makes the annexation of Kherson and Zaporizhia regions a highly risky and vulnerable operation,” Fyodorov continued. “If Moscow declares the Kherson region its own territory, it would be very difficult politically for the Russian authorities to withdraw from there. They could withdraw [only] as long as its status has not been settled.”

The area is important to both sides militarily, as well as economically and symbolically.

In 2014, when Russia launched its proxy invasion of Ukraine, it was declared part of Novorossiya, a de facto statelet that would have stretched from the Kharkiv region in the north east to Odesa in the south west.

The Moscow-inspired rebellion failed outside the border areas of the eastern Luhansk and Donetsk regions, otherwise annexation - as in Crimea - might have followed.

For decades, Kherson was a centre of Ukrainian agricultural production. It has its own sea ports as well as well-developed agricultural infrastructure, as well as a number of popular holiday resorts which gained more visitors after Russia annexed Crimea in 2014.

It was also the sole source of water for Crimea, which struggled with drought and shortages after the Ukrainian side cut its supplies off following the Russian annexation of the peninsula.

To Russia, the area now provides a land bridge to the Mykolayiv region and on to Odesa, one of Ukraine’s biggest cities and its largest sea port.

Its importance increased further after the Russians were recently forced to leave the strategic Zmiyiny (Snake) Island which they had occupied early on in the invasion, making Kherson their closest base to Odesa.

“Zmiyiny Island was also a critical point which allowed Russians to count on the preparation of landing operations in the Odesa region,” Samus told IWPR. “Now they can forget this.”

Both sides continue to concentrate troops in the east of the country, with Russians attempting to advance in Donetsk after capturing all of the neighbouring region of Luhansk. The Russian forces are slowly advancing, but Ukrainian troops are in well-fortified positions, some of which are have been stable since early on in the 2014 invasion.

In the south, Ukraine’s progress has been ensured by fresh supplies of modern precision weapons from the West which have allowed Ukrainian forces to target Russian logistics and supply lines.

“They are switching to defence; we are building up forces for an offensive,” said Mykola Sungurovski, the director of military programmes at the Razumkov Centre think-tank in Kyiv. “Our task is not to let them consolidate themselves in the territories they occupied. We are reaching it by striking their forward forces as well as logistic support systems.”

Fyodorov cautioned that the southern forces were currently not strong enough to liberate the entire Kherson region.

“Possibly, they will gain the required superiority by the autumn,” he continued. “We don't know what reserves the Ukrainian general staff has and is going to create.”

The Ukrainian army is still significantly outnumbered and outgunned by that of Russia’s. Many Ukrainian recruits have never held a weapon before; some are now receiving military training from Western allies.

Samus warned that the northern Ukrainian regions which Russia partially occupied but failed to hold on to at the beginning of the full-scale invasion were still in danger, especially if Russian ally Belarus sent forces across the border to join the invasion.

He concluded that in the south “there will be heavy fighting because for Russia, losing Kherson and Zaporizhia regions means direct danger to occupied Crimea”.