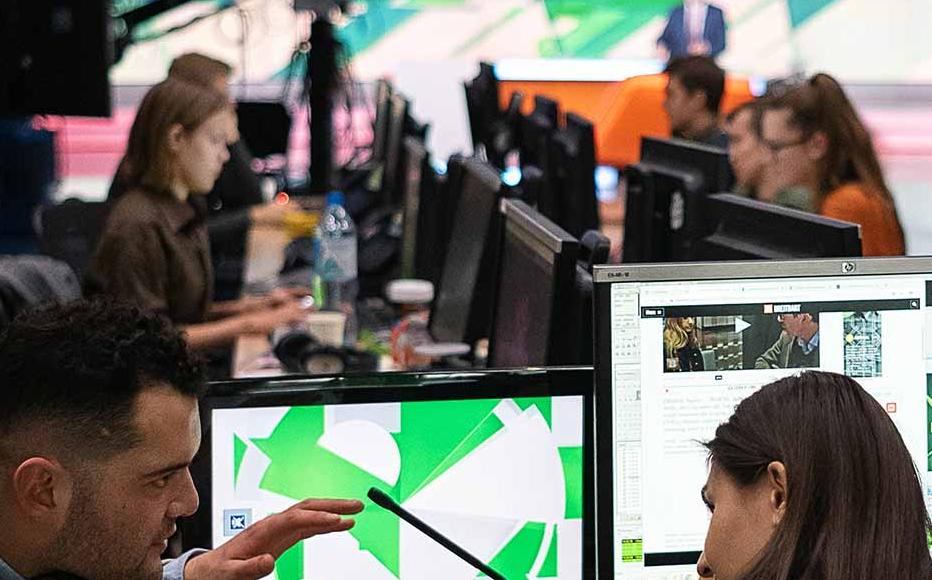 Pro-Kremlin disinformation in Ukraine has reached levels unseen since 2014, say researchers. International audiences are not spared as studies show that Russian state-controlled media that cater for Western audiences in various languages, such as RT and Sputnik, disseminate anti-West conspiracy theories. © Misha Friedman/Getty Images
The link has been copied

As Russia started to pull troops to Ukraine’s border in late 2021, in what is described as the biggest security crisis in Europe in years, the level of disinformation also spiked.

Although the US government said it had reached a peak unseen since 2014, many of the themes remain the same – undermining Western support for Ukraine, and attacking Ukrainians’ confidence in their government and international allies.

Russia has long been using both military and non-military means to achieve its foreign policy goals in neighbouring countries, particularly Ukraine, to prevent their drift towards the West and away from Moscow’s sphere of influence.

The annexation of Crimea, and the Russian-led military attack on eastern Ukraine in 2014, were accompanied by a constant stream of propaganda by Russia’s state media and its amplifiers on social networks. Russian state television broadcast blatant fakes, such as the story about a three-year old boy who was allegedly ‘crucified’ by the Ukrainian army. The aim was to intimidate the population of eastern and southern Ukraine, which traditionally trusted Russian media, and to stoke hatred towards Ukrainians inside Russia.

International audiences were not spared. In July 2014, in the aftermath of the downing of the Malaysian airlines flight MH17 in which 298 people died, Russian state-controlled media that cater for Western audiences in various languages, such as RT and Sputnik, disseminated a wide range of conspiracy theories. These included an interview with a supposed Spanish air traffic controller Carlos, who claimed that the missile that hit the plane was Ukrainian (it later turned out he was a fake persona) or that all the passengers on the plane were dead before the crash.

The goal of such tactics was to throw as many versions of what happened as possible into the mix, so as to pollute the information space and distract public attention from the evidence pointing towards Russia’s responsibility.

Distract is one of so-called ‘four Ds of Russian disinformation’: a concept coined by Ben Nimmo, current Global IO threat intel lead at Meta, formerly Facebook. The other three are dismiss, distort and dismay. Pro-Kremlin disinformation actors use all these techniques in their daily activities.

Research by the US-based company Mythos Labs showed that the activity of suspicious accounts on Twitter that amplify pro-Russian disinformation about Ukraine increased by more than 3000 per cent  in the last two months of 2021 compared to the rest of the year.

Remarkably, the activity of pro-Kremlin actors online started to increase rapidly in mid-October 2021, two weeks prior to the first reports of a Russian military build-up at Ukraine’s borders. This may indicate that a sudden spike in pro-Kremlin disinformation activity might be a precursor to a military escalation by Russia.

The research showed that suspicious accounts tweeted mainly in Russian in November only to switch to English in December, in an apparently coordinated effort to influence social media users’ opinion globally.

The main goal seems to be to undermine support for Ukraine in the West, particularly in the US, but also in non-Western countries that have a significant global weight such as Turkey and India.

"They keep us on alert all the time in a state of insecurity and tension.”

The narratives included reports that Ukrainian soldiers were responsible for killing civilians in Donbas, ahead of a planned military offensive there including the use of chemical weapons. Other arguments, such as the US was trying to drag the EU into war by supporting Ukraine, or that NATO expansion was a threat to Russia, were also put forward.

“There is no doubt it is a coordinated campaign,” said Maria Avdeeva, research director at the European Expert Association, who focuses on combating disinformation and cyber threats. “Pro-Kremlin disinformation actors now mostly target Western audiences with the goal to persuade them that Russian demands are legitimate.”

Avdeeva noted that the campaign had two main objectives: to force the West into recognising Russia’s sphere of influence, which includes Ukraine, while portraying Kyiv as a threat to Moscow.

Efforts targeting a Ukrainian audience also increased, said Kateryna Kistol, an expert in information security who coordinates a project about resisting disinformation in the country’s media at LIGA.net, one of Ukraine’s leading online outlets.

LIGA researchers analysed disinformation on social media, particularly on Telegram, targeting Ukrainian audiences. They identified a network of Telegram channels that acted in a coordinated manner to amplify each other’s sharing of pro-Kremlin disinformation. This network included anonymous channels but also those of Ukrainian pro-Russian politicians, bloggers and TV presenters. Some of the latter work at the Nash TV station, owned by pro-Russian opposition politician Yevhen Muraev, who was recently named by the UK government as a potential head of a puppet government which Russia might attempt to install in Ukraine.

“While this is not rock-solid evidence of Russian involvement, their quick and emotional reaction indicated we certainly hit a nerve,” Kistol said.

In February 2021, Ukraine’s SBU security service also stated it had uncovered a network of Telegram channels which amplify pro-Kremlin disinformation and target Ukrainian audiences. According to the SBU, it is controlled by the GRU, Russia’s military intelligence.

The goal of disinformation actors who target Ukrainian audiences is to convince them that they should not trust the West, as well as undermining support for the Ukrainian government and portray Ukraine as a failed state. However, these narratives are not new, says Kistol: they have been around at least since 2014.

Avdeeva argued that Ukrainian society had developed a high level of resilience to Russian disinformation since then.

“Our victory is in the fact that there are very few ‘neutral’ people left in Ukraine, who, so to say, watch both pro-Ukrainian and pro-Russian TV channels. Most people have a clear position, and only a tiny minority would believe that ‘Ukrainian fascists want to attack Donbas’ narrative now, compared to 2014.”

Kistol partly agreed, adding, “We have learned from our mistakes in 2014 and we know our vulnerabilities. We are now able to recognise the main Russian disinformation narratives and expose them as such.

‘The problem is that there are still things difficult to control: like people’s emotional and psychological state. And that’s where disinformation actors are hitting at the moment with their massive effort. They keep us on alert all the time in a state of insecurity and tension.”

Olga Tokariuk is an independent journalist, disinformation researcher and non-resident fellow at the Washington-based Centre for European Policy Analysis (CEPA).