More than 13 per cent of the country needs demining. It will take decades and more than 250 billion US dollars. 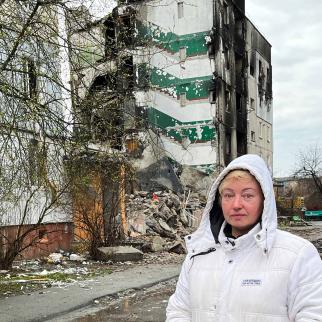 Oksana Soshko, a relative of the deceased Smishchuk family, outside the apartment building in Borodyanka destroyed by Russian bombing March 1. © IWPR

Residents believe the Russians attacked so viciously because of spirited resistance by the local territorial defence.

More than 13 per cent of the country needs demining. It will take decades and more than 250 billion US dollars. 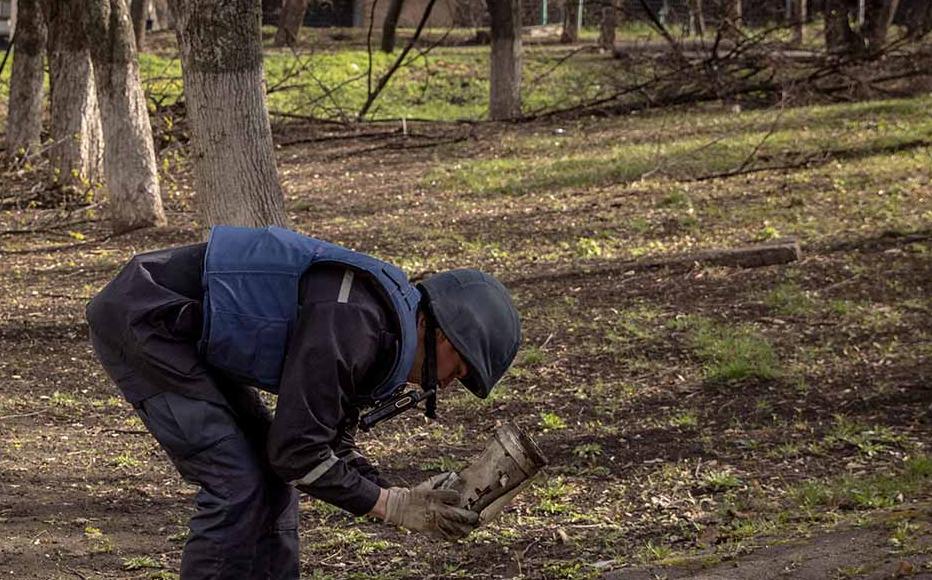 Deminer, Vladyslav Shapoval from the Kharkiv emergency response services unit remove part of a Grad rocket from a park after a recent Russian attack on April 15, 2022 in Kharkiv, Ukraine. © Chris McGrath/Getty Images
The link has been copied

Experts in Ukraine warn that retreating Russian troops have left vast numbers of mines behind them, aimed at civilian as well as military targets and including many devices banned by international conventions.

Since the start of Russia's invasion of Ukraine, specialists have cleared more than 63,000 explosive devices and more than 400 kg of explosives, including nearly 2,000 aerial bombs.

The Ukrainian military has reported the widespread use of cluster munitions, trip wires and improvised explosive devices as well as anti-vehicle and anti-personnel mines in the Kyiv and Sumy regions.

Steve Goose, director of Human Rights Watch’s arms division, stressed that countries around the world must strongly condemn Russia's use of banned anti-personnel mines in Ukraine.

"These weapons do not distinguish between combatants and civilians and leave a deadly legacy for many years," he said.

Combat mining is a standard tactic for any party in a conflict zone so as to ensure that the enemy cannot enter that territory. But Russian forces have also boobytrapped civilian cars, private homes, children's toys and even the bodies of people and animals in liberated villages and towns.

Igor Molodan, a security expert at the Association of Sappers of Ukraine, an organisation that searches for and informs the public about the danger of mines, said that Russia was combining both standard combat and what he described as “terrorist” mining, banned by international law.

"There are already cases when doorways and cupboards in apartments or toys were mined,” he said. “This is done to intimidate the population and create panic. Russia used a similar tactic during the war in Chechnya.”

Noting that this included areas where there were no active hostilities, he added, "By such terrorist acts - mining of toys, mines with ‘surprises’, and so on - Russia is turning itself into a criminal state.”

Although Ukraine’s State Emergency Service (SES) has already embarked on the operational demining of essential military and civilian facilities, so many more remain that some efforts to clear civilian areas have had to be suspended due to ongoing fighting.

Serhiy Grishin, programme officer for HALO Trust Ukraine, one of the international organisations involved in demining in Donbas since 2016, said that work was currently impossible due to the danger posed by active hostilities.

"So far there is no understanding of when and where it will be possible to work safely. As soon as it appears, we will resume demining. The safety of our employees is important."

As the Russians had introduced fresh varieties of munitions, thorough retraining of their employees would be necessary, Grishin added, explaining that where a range of mines had been used, “multi-level demining” was needed, utilising a variety of methods in the same area.

"Among the new types of threats are a large number of unexploded ordnance, cluster munitions, high-explosive anti-personnel mines, ‘petal’ mines - unfortunately, we expect that there will be many [of them]," he concluded.

Demining is a lengthy process, complicated by tactics intended to frustrate clearance. According to UN estimates, one year of hostilities demands ten years of demining.

Molodan noted that while it took only five minutes to bury a mine, it took much longer to remove it - especially if two were placed on top of the other. In this case, both would explode during the attempted removal of the top one.

The process is also expensive. With the conflict with Russia ongoing in Ukraine since 2014, it will take decades and, according to preliminary estimates by the general staff of the Ukrainian army, at least 250 billion US dollars to completely clear the territory of explosives.

Molodan described a recent trip he took with the SES on a demining mission to the village of Dmytrivka in the Kyiv region after it was retaken from the Russian forces.

The process began with interviewing locals to find out where the Russian troops were stationed and where they had stored their supplies.

Then a group of sappers - outfitted in bulletproof vests and helmets and equipped with metal detectors and probes - surveyed the scene, clearing both mines and unexploded ordnance.

It was an intense and often complicated task.

"In Dmytrivka, an exploded ammunition depot was demined - a metal detector did not work there because there were many fragments,” Molodan explained. “Sappers inspected every stone in the collapsed building to find unexploded ordnance."

Elsewhere in the village, an abandoned tank aroused the demining team’s fears.

"The tank blocked the road and, of course, there was a suspicion that the approaches to the tank were mined, so that our troops could not go around it, or if they tried, they would explode,” he continued. “Sappers were distributed around the perimeter with metal detectors and removed about a dozen anti-vehicle mines.”

Civilian areas had also been boobytrapped, with the apparent intention of injuring or killing residents as they returned. Wrecked tanks or armoured personnel carriers were left in the courtyards of residential buildings, surrounded by concealed mines

"The owners return, and detonate these mines,” he said.

Sappers needed to check every detail before entering a house or even opening a car door. In apartments previously occupied by Russian soldiers, they anticipated trip wires or mined cupboard doors.

The advice in areas that had not yet been thoroughly checked by SES sappers was for civilians to walk only on paved roads, concrete or cobblestones. Children should not be allowed to run around in gardens, visit parks or even walk across lawns.

Even after 20 years of experience, Molodan said that he was still surprised by innovative methods used to conceal explosives.

He said that civilians should take no risks, adding, "In case you see something suspicious, the benefit of the doubt should be in favour of security and the judgment of specialists."

Ukraine Voices
Ukraine
Crimes Against Humanity, Conflict
Connect with us