A court in Kyiv sentenced a lieutenant to nine years in prison for war crimes committed in the Kyiv region.

A court in Kyiv sentenced a lieutenant to nine years in prison for war crimes committed in the Kyiv region. 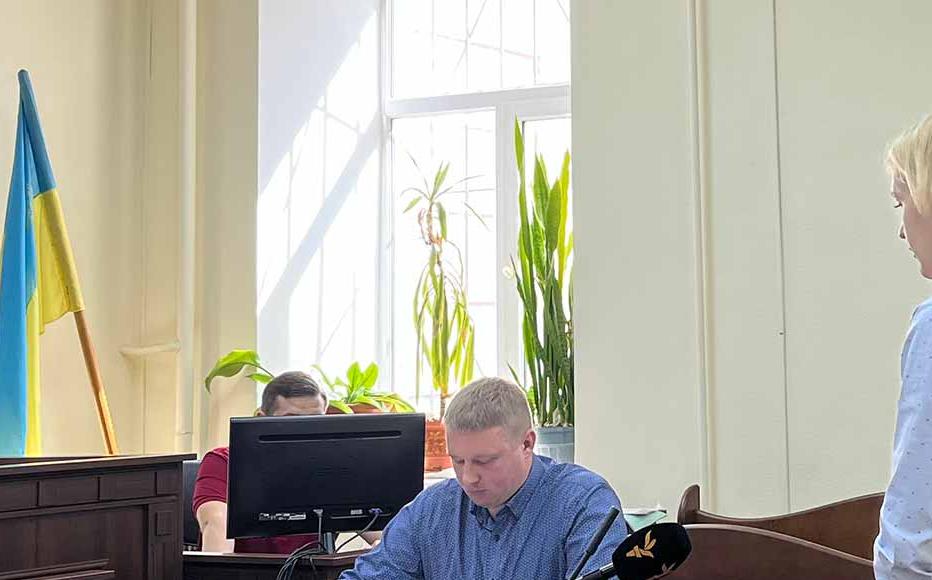 A session of the trial against Russian lieutenant Sergey Dmytrovych Stainer, who was sentenced to nine years of imprisonment in Ukraine's first verdict in absentia on September 26. © Irina Domashchenko
The link has been copied

A Russian soldier has been sentenced to nine years in prison in Ukraine’s first verdict in absentia since Russia’s full-scale invasion of the country.

On September 26, after a four-month trial, 23-year-old lieutenant Sergey Dmytrovych Stainer was found guilty of violating international humanitarian law. He was tried under Part 1 of Article 438 of the Criminal Code of Ukraine on the violation of the laws and customs of war.

The trial established that, between March 9 and 28, Stainer was in charge of a Russian unit in the village of Lukyanivka, in the Kyiv region, and ordered his subordinates' cruel treatment of civilians and illegal appropriation and destruction of their property.

The lieutenant’s identity was revealed by journalists from Radio Svoboda, the Ukrainian service of Radio Free Europe, after they found Stainer’s medical documents in the tank he had abandoned as Russian troops fled Ukraine’s counteroffensive in late March.

The investigation found that Stainer, prior to his deployment in Ukraine, was the deputy commander of the weapons company of military unit No 12128, located in the village of Totske-2 in the region of Orenburg, about 1,500 kilometres east of Moscow and near the border with Kazakstan. He had served in the army since 2016.

Radio Svoboda’s Kira Tolstiakova was a key witness in the pretrial investigation as she contributed to identifying the soldier.

Tolstiakova told the court that on March 28, Radio Svoboda launched an investigation to track down and identify a Russian serviceman whose documents were found in an abandoned tank in Lukyanivka. A military reporter found the medical booklet, photocopied it and sent it to Tolstiakova via a messaging app, asking her to check whether investigators were interested in studying the documents.

“I analysed these documents,” Tolstiakova told the court. “The medical book contained his details, his name Stainer Sergey Dmytrovych, his age, position, and rank, lieutenant, and details of his position as deputy commander of the weaponry company. The military unit, place of birth, and location of the military unit are also indicated. It also had information about his marital status and his contact phone numbers. There was another document, about material values, that is, what he was directly transporting in the tank, weapons that the Russian military apparently had received to fight in Ukraine.”

During the identification process, Stainer’s profile was found on VKontakte, a social media network largely used in Russia, where he posted photos with his wife and parents and of himself wearing the black-and-orange St George's ribbon, which has become a symbol of the Russian invasion. Investigators discovered that as of July 2021, he and his wife lived in Omsk, in northwestern Siberia.

Journalists contacted the lieutenant on one of the cell phones listed in the medical record.

“Where did you run?" they asked in Russian.

Stainer deleted several messages, but then replied, “We are close.”

At the beginning of May, Stainer was placed on the international wanted list, and at the end of the month, the Kyiv regional prosecutor's office sent an indictment to the Solomianskyi district court as part of a special pre-trial investigation in absentia.

Ukraine’s legal procedure requires that the accused be called to court with a minimum of two summons and announcements on the tribunal’s website and the prosecutor general's official gazette. After having ascertained that the accused is evading justice, the judge must approve a request for a special trial and then proceed to consider the merits of the case.

Oleksandr Hudym, 36, one of the witnesses, recognised Stainer from photos taken from social media.

After Russians occupied his village, Hudym and his mother spent 21 days with Russian troops living in a neighbouring house that they had commandeered. Hudym understood that the group was led by a soldier named Sergey.

Hudym told the court that the first days of the occupation had been the worst. The Russians came to his house and told him and his mother "not to make unnecessary movements" and to leave only with permission. They took all their chickens.

“They came to my mother and said ‘I will exchange two eggs for two dry rations.’

They ‘asked’ with weapons. They didn't take it themselves, they forced us to give it. They ‘asked’ for potatoes and eggs," Hudym told the court.

The Russians also took a petrol generator and concrete slabs from Hudym’s garage to build trenches.

When the Ukrainian counteroffensive began on March 24 and the Russians retreated, Hudym’s property was badly damaged, including his house and his car. He spent most of the time hiding in his cellar. The material damage caused to him was estimated at approximately 150,000 hryvnias (about 4,000 US dollars).

The second witness in the case, Hudym’s neighbour Svitlana Maruzhenko, also told the court that the Russian unit in Lukyanivka was led by a man named Sergey.

“He talked to me in a rude tone, maybe he was the chief,” the 30-year-old stated.

After Russian soldiers took over her house, she moved to her sister's home on the other side of the village. She also identified Stainer in a photo taken from social media.

The criminal code section under which Stainer was charged prescribes a prison term of between eight and 12 years. Mykola Stiopin, the prosecutor of the Fastiv district of Kyiv's region, asked for nine years as he emphasised the gravity of the crime and stressed that there were no mitigating circumstances.

He stated that “taking into account the examined evidence, it is possible to conclude that Stainer acted with direct intent, which was aimed at the cruel treatment of the civilian population and other violations of the laws and customs of war”.

Stainer was defended by Viktor Ovsiannikov, a lawyer from the Centre for Free Legal Aid, a service guaranteed and partially funded, by the state. Ovsiannikov also defended Vadym Shyshymarin, the first Russian serviceman convicted for war crimes on May 23, 2022.

Ovsiannikov asked the court to acquit Stainer because, despite the special pre-trial and judicial investigation, the accused was not a party in the debate.

He told the court that Stainer “was not proven guilty, there is no direct evidence that he committed the crime he is charged with. There are no direct statements of both the victim and witnesses that would point to the specified person”.

On September 26, neither the prosecutor nor the lawyer attended the verdict; only journalists were present.

An air siren began wailing as Oksana Kryvorot, judge of Kyiv’s Solomianskyi district court, read the last words of the sentence against the Russian soldier.

The audience left quickly; the courtroom was hastily closed and people rushed to the shelter.