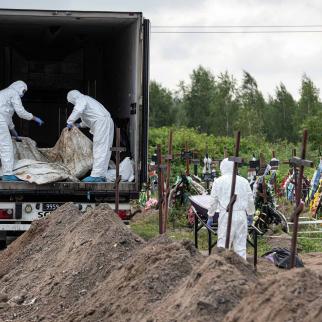 Workers placing a body of one of the unidentified persons who were killed during the Russian occupation of Bucha into a coffin on August 11, 2022 in Bucha, Ukraine. © Alexey Furman/Getty Images 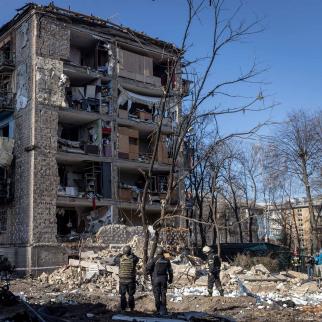 Police and military personnel stand in front of a residential apartment complex that was heavily damaged by a Russian attack on March 18, 2022 in Kyiv, Ukraine. © Chris McGrath/Getty Images 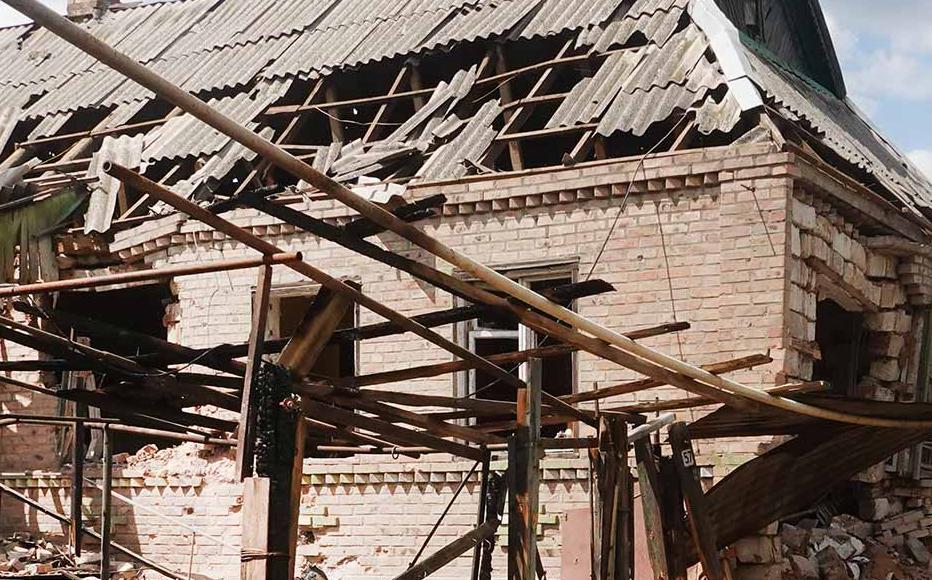 An abandoned house destroyed by Russian missiles in Bakhmut, Ukraine. © Scott Olson/Getty Images
The link has been copied

The deportation of Ukrainians to Russia has become a key feature of the Kremlin’s war against Ukraine. Albina Basysta, assistant professor in international law at Kyiv’s Taras Shevchenko National University, told IWPR’s Svitlana Morenets that those responsible could face justice in a variety of jurisdictions.

IWPR: Why are Ukrainians being deported from the occupied territories to Russia?

Albina Basysta: One of the goals is to destroy Ukrainians’ identity, their cultural and moral values. It separates Ukrainians from their homeland, creating tough living conditions and making it hard to return to the homeland.

Ukrainians are often sent to distant, depressed regions of the Russian Federation. They are provided with no material assistance, which minimises the possibility of quickly leaving to a third country to then come back to Ukraine.

Official information has it that some 1.5 million Ukrainians have already been deported to Russia. Over 300,000 of them are children and this figure is not final as Russia does not provide any data. 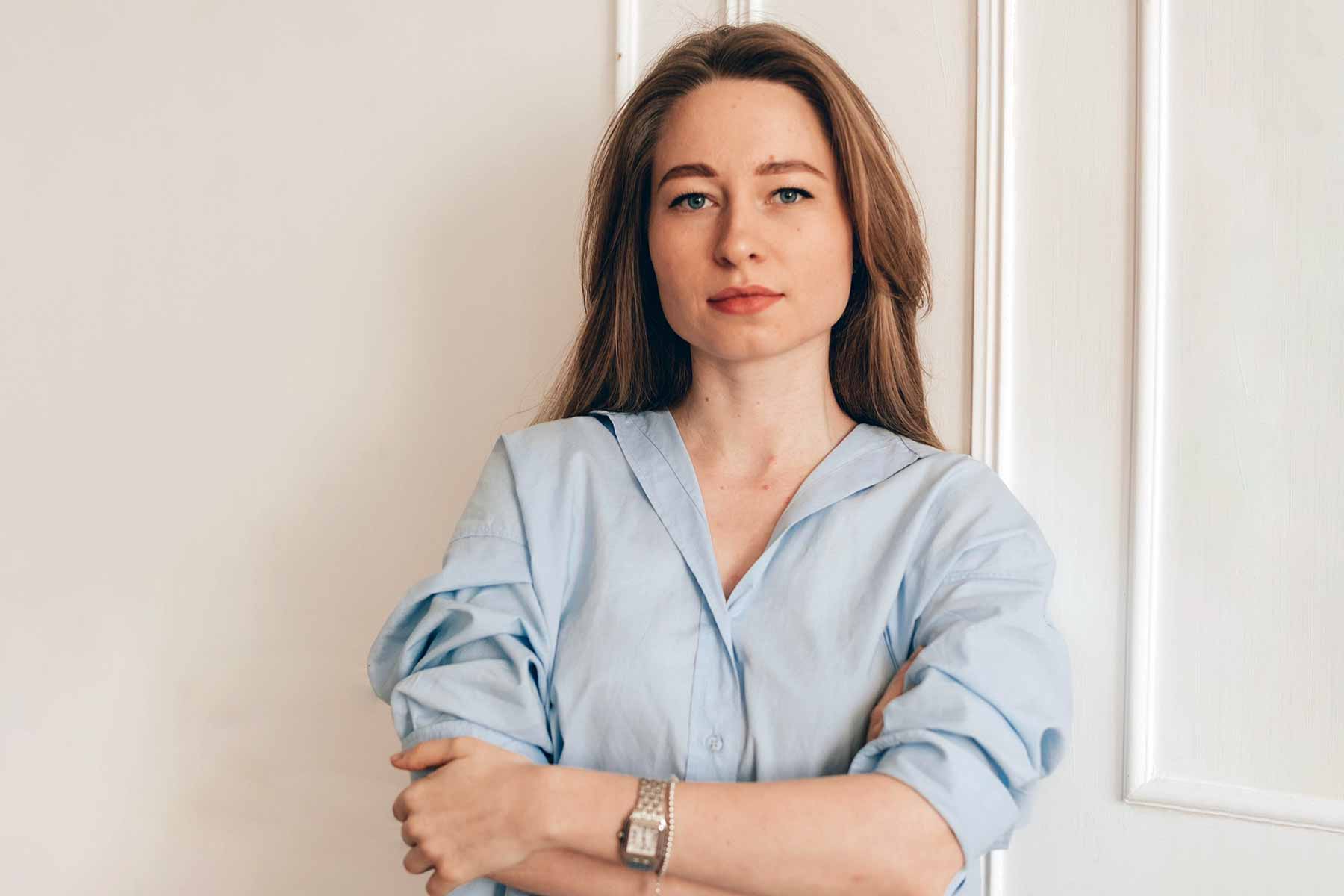 What is the purpose of deporting children? Do Russians have the right to adopt them?

Moscow aims to eliminate the identity of these children as Ukrainians. They are adopted by Russian families where they start speaking Russian, growing up in Russian culture, learning history from a Russian perspective.

Ukrainian legislation has a specific procedure about adoption by foreigners. Russia has no legal right to adopt Ukrainian children through deportation. Their forceful relocation is an international crime; an element of the crime of genocide.

Finding and identifying these children is very difficult; Ukrainian authorities have neither [direct] access nor information about them.

Where should the crime of deportation be prosecuted, in Ukrainian or international courts?

Russia's crimes, first and foremost, must be investigated within Ukraine’s judicial system. International criminal courts or special tribunals can help, but they are a supplement to the national judicial system, they cannot replace it.

The office of the prosecutor general states that 20 criminal cases involving deportation have already been initiated in Ukraine. A group of prosecutors from the international criminal court and more than ten other European countries are helping Ukraine to carry out the investigation.

The Ukrainian criminal code addresses the issue in two articles. Article 438 concerns violations of the laws and customs of warfare, referring to breaches of the Geneva Conventions and additional protocols of international humanitarian law. The punishment under Ukraine law varies from eight years to life imprisonment.

Article 442 criminalises acts of genocide. The forced displacement of children from one group to another qualifies as genocide under Ukrainian law. The punishment for this varies from ten years to life imprisonment.

Can deportation and forced displacement be used interchangeably?

International law distinguishes between them; the difference lies in whether or not a state border was crossed. If so, it is deportation. If people were displaced from one part of occupied territory to another, it is a crime of forced displacement.

The Geneva Convention prohibits the deportation of civilians by an aggressor state. There is an exception that such evacuation may be justified during hostilities that threaten the lives of civilians. But this is a very narrow exception to the general rule prohibiting deportation. Forced deportation of Ukrainians to Russia does not apply under this exception in most cases. The punishment under international law for crimes against humanity and war crimes (both include deportation) varies - up to 30 years or life imprisonment.

How can cases of deportation of Ukrainians to Russia be tried?

The Ukrainian judicial system foresees prosecution in absentia. [In the current environment] the complication is how to identify the perpetrator. Forced deportation is classified as a war crime and crime against humanity. Under international law, there is no time limit, they can be prosecuted even after 20 or 30 years.

Deportation can also be prosecuted through the principle of universal jurisdiction. It means that if the individuals prosecuted in absentia in Ukraine leave Russia, they can be arrested and prosecuted on the territory of third countries.

Can Russia be prosecuted as a state that commits war crimes?

A state can be prosecuted in the International Court of Justice (ICJ) [a civil court that hears disputes between countries]under the 1948 Convention on the Prevention and Punishment of the Crime of Genocide. On February 26, three days after Russia started the invasion, Ukraine filed an interstate lawsuit with the ICJ against Russia for breaching the 1948 Convention.

The ICJ is expected to hear the case this autumn. Ukraine has the right to expand the claims to include the forced deportation of children to Russia. These crimes had not yet been committed [at the time the lawsuit was filed]; now Kyiv can expand the claims.

There is also command responsibility: not only the state can be responsible for the actions of its military, but also the commanders. Not the direct perpetrators, but those who gave orders.

There are high-profile precedents we can refer to. The International Tribunal for the former Yugoslavia (ICTY) charged Radovan Karadzic, the former president of Republika Srpska, and former Serbian president Slobodan Milosevic of genocide and crimes against humanity. The latter died in his cell before the verdict was handed down in 2006.

In March 2021, the appeals chamber of the International Criminal Court (ICC) found Rwanda’s military commander Bosco Ntaganda guilty of forcible displacement and deportation of civilians in the Democratic Republic of Congo (DRC) and sentenced him to 30 years in prison.

What could be the verdict for Russia?

People cannot get their lives back, but the culpability of the country for the crime of genocide will be legally established. This will define compensation, the so-called reparations - including satisfaction, that is, the recognition at the political level that the Russian Federation committed the crime of genocide against the Ukrainian people. This may include the obligation to return deported citizens back to Ukraine.

Can Ukraine protect the rights of Ukrainians who have been deported?

Ukraine has severed diplomatic relations with Russia. Hence, Ukrainian diplomatic representatives cannot provide diplomatic protection for Ukrainian citizens on Russian territory. Kyiv has limited information about exactly how many people were deported and how they are treated there.

Ukraine has asked Switzerland, which has diplomatic consulates on Russian territory, to provide consular protection to Ukrainian citizens. But to implement this protection, it is necessary to obtain Russia's consent. Such consent was denied.

Kyiv can protect its citizens once they leave Russia’s territory and reach other countries or return to Ukraine.