Ukraine and the EU: The Path Ahead

Candidate status has been granted, but implementing the required reforms could be tricky. 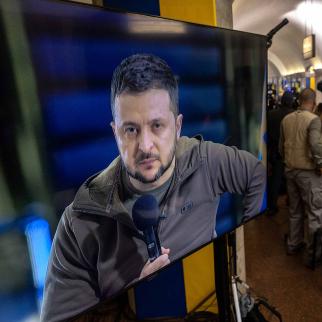 Seen on a monitor at a press conference Ukrainian President Volodymyr Zelensky takes questions from the media on April 23, 2022 in Kyiv, Ukraine. © John Moore/Getty Images

Critics argue that move, currently being fast-tracked by lawmakers, could curtail free speech.

Ukraine and the EU: The Path Ahead

Candidate status has been granted, but implementing the required reforms could be tricky. 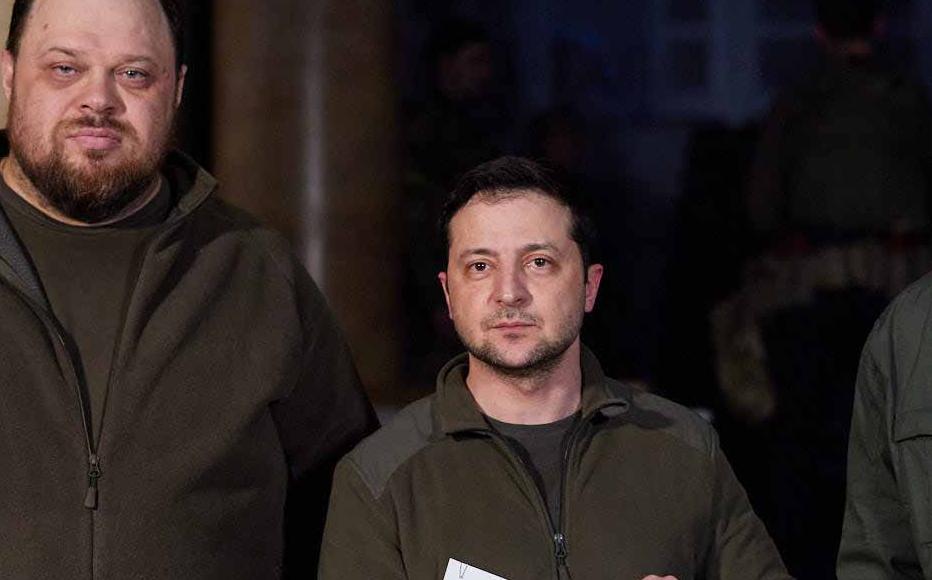 On February 28, Ukrainian President Volodymyr Zelensky signed the official application for Ukraine's accession to the European Union. In June, Kyiv was granted candidate status "in advance," that is, before having fulfilled all the requirements to be part of the bloc. © president.gov.ua
The link has been copied

The full-scale invasion had began four days earlier. Russian tanks were rolling across eastern and southern Ukraine, hundreds of thousands of Ukrainians were on the move and the capital Kyiv was under shelling.

The meeting, however, was not about military updates. Once in the room, reporters were shown a letter of application for accession to the EU.

“My office team wrote this application in a private house near the airport, which was shelled right through this night,” said Olha Stefanishyna, vice prime minister for European and Euro-Atlantic integration.

Russia’s full-scale invasion has accelerated Ukraine’s dreams of joining the Brussels-based bloc, but the path ahead may be rocky.

Ukraine’s candidate status has been domestically popular, with many hailing the decision as a historic recognition that the country’s place is in Europe.

But some experts have noted that countries like Turkey have been in limbo for many years and made no steps towards actual membership. And although candidate status was granted in advance, to seal the membership Ukraine has to implement a long list of reforms.

The Ukrainian authorities have vowed to meet these conditions in the coming months.

“We have fully prescribed the roadmap of 107 legislative and regulatory acts, all of which have already been worked out by the government,” Shmyhal said during a press conference on September 14. “Sixty of them are already brought into the Verkhovna Rada [the Ukrainian parliament], others will be brought within a month. By the end of the year, we will fulfill all necessary conditions Ukraine needs to start negotiations with the EU on membership.”

"If not for the war, no one would give us candidate status in advance.”

Politicians are confident that the reforms will sail smoothly through parliament.

“We have a majority for the adoption of all the necessary European integration laws and there is a common desire to do this as soon as possible,” Artem Kovalyov, a lawmaker with the ruling Servant of the People party, told IWPR.

Kovalyov maintained that the reform package could be voted in by a constitutional majority - that is, by over 300 of the 450 lawmakers - although currently the number is lower as the occupied regions have no representation.

“This should be a signal to the EU that the early opening of accession negotiations is the will of the entire Ukrainian people,” Kovalyov added.

The process, however, may not be straightforward. Some reforms are challenging, if not painful. Bills on the rights of national minorities, on oligarchs and on the media are bound to divide parliament; the latter has been widely criticised.

The most immediate steps include the reform of the constitutional court, supreme council of justice, and the qualification commission for judges. Ukrainian authorities finalised the key anti-corruption unit in the prosecutor general’s office only on the eve of the EU council vote in June.

“The start of the negotiations will depend on both sides – Ukraine and the EU,” deputy prime minister Olha Stefanishyna told IWPR. “We are ready to complete the implementation of the European Commission recommendations before the end of this year. It is realistic to start negotiations in 2023. When exactly this will happen – in January, April, or another month - is now impossible to predict.”

She added that Ukraine could implement the new legislation even before the official start of negotiations.

“We cannot afford to delay such important decisions as preparations for membership…We presented our partners with a vision of the next steps, proposing to start this work as soon as possible,” Stefanishyna continued.

She argued that progress in adapting legislation allowed Ukraine to start a dialogue on integration into the system of the EU’s “four freedoms” - free movement of goods, capital, services and people – at the same time as accession negotiations.

“Thus we will not waste time, and the integration into the internal market will allow us to meet the requirements for membership,” she concluded.

Some experts are more cautious.

“Let's be frank. If not for the war, no one would give us candidate status in advance,” Dmytro Naumenko, a senior analyst with the Ukrainian Centre for European Policy, told IWPR. “At best, we would be given a list of requirements for obtaining candidate status, which would drag on for many years, as happens in the Western Balkans countries.”

Formally, Ukraine can adopt all the laws before the end of the year, but this will not be enough for the EU, Naumenko continued.

“The authorities may eye a ‘Bulgarian scenario,’ when Bulgaria voted on all required laws, but delayed their actual implementation,” he said. “But the EU will not repeat its mistakes... at best we will not move on to accession negotiations until mid-to late next year. This perspective is based on the fact the EU will continue to be positively oriented to Ukraine and ready to turn a blind eye to minor shortcomings.”

Then there is the war. Ukraine's transition to a new stage in relations with the EU is influenced by the armed conflict, which, Stefanishyna noted, “may limit our ability to pass some legislation, so some things will come into force after the end of martial law”.

Martial law, enforced since the invasion, affects all levels of life, including the scope of work of civil society groups.

A high-ranking Ukrainian diplomat, who asked to remain anonymous, told IWPR that this had indeed “reduced civil rights”.

“The EU understands this but it also wants to make sure that at the end of the war these rights will return to their natural state, and that Ukrainian authorities will not abuse the opportunities that martial law now gives them,” the diplomat said.

There is an agreement among EU politicians, in particular among eastern European countries, that Ukraine has to be able to begin these negotiations even amid a state of war, as no one can predict how long the conflict will continue for.

Formally, Ukraine’s European integration has nothing to do with the course of the war, but Kyiv sees these processes as interconnected. One of Moscow’s goals was to block Ukraine’s pro-Western trajectory, and EU membership would seal Kyiv’s choice.

“If the war is prolonged, talks about possible compromises and concessions [to Russia] will continue,” political scientist Yevhen Mahda said. “However, the closer Ukraine will be to the EU, the easier it will be to resist provocations and persuade the West to continue to support Ukraine.”