Ugandan Leader Lashes Out at ICC

Was President Museveni expressing genuine African resentment of the court, or just manoeuvring to position himself as regional leader?

Ugandan Leader Lashes Out at ICC

Was President Museveni expressing genuine African resentment of the court, or just manoeuvring to position himself as regional leader? 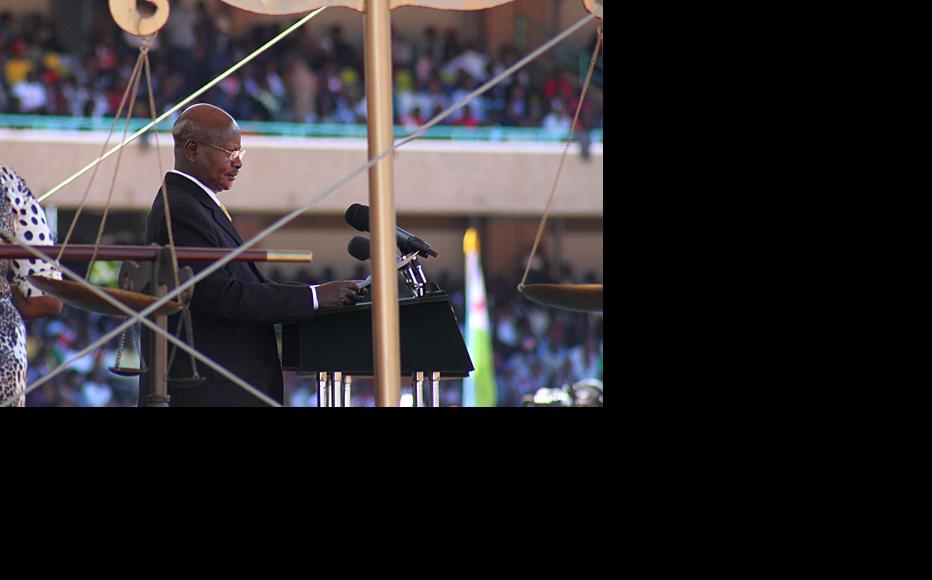 Museveni delivers his speech during President Uhuru Kenyatta’s swearing-in ceremony at the Kasarani stadium in Nairobi. (Photo: Capital FM)
The link has been copied

Uhuru Kenyatta was sworn in as Kenya’s new head of state last week, but it was Yoweri Museveni, the longstanding president of neighbouring Uganda, who stole the headlines at the two-hour ceremony in Nairobi.

During a speech delivered to a packed stadium on the edge of Nairobi on April 9, Museveni congratulated Kenya for “rejecting blackmail” by the International Criminal Court, ICC. He went on to accuse western leaders of using the Hague court to “install leaders of their choice in Africa and eliminate the ones they do not like”.

Museveni was speaking on behalf of 11 African heads of state and other foreign representatives who attended Kenyatta’s inauguration as Kenya’s fourth president.

Kenyatta and Vice-President William Ruto, who was also sworn in, both face trial at the ICC – along with a third suspect, Joshua Arap Sang – on charges of orchestrating the violence that engulfed Kenya following the last presidential election five years ago.

Between December 2007 and early 2008, more than 1,100 people died as supporters of the Party of National Unity, PNU, and the Orange Democratic Movement took up arms over the disputed poll result.

Kenyatta, formerly of the PNU, is the first individual to become head of state while facing trial at the ICC. His case is scheduled for July, while Ruto’s is due to start in late May.

Analysts are divided on the significance of the Ugandan leader’s remarks. Are they a genuine reflection of growing African opposition to the court, or should they be seen simply as an attempt by Museveni to win political support across the East Africa region?

The Hague court responded by emphasising that its investigations are entirely independent from any political process, and are based solely on evidence.

“The ICC has continuously ensured that it does not seek to have any influence in the political sphere,” Maria Kamara, the ICC’s spokesperson in Kenya, told IWPR.

Others argue that Museveni’s new stand against the ICC is disingenuous. After all, in 2003, Museveni was the first national leader to refer crimes in his country to the court.

He invited the then ICC prosecutor, Luis Moreno Ocampo, to investigate the long running conflict in northern Uganda. As a result, the international court issued an arrest warrant in 2005 for five members of the rebel Lord’s Resistance Army, including its leader, Joseph Kony.

“Museveni’s remarks are totally hypocritical because he invited the ICC to pursue Kony in his country,” Godfrey Musila, an international criminal justice lawyer in Nairobi, said. “He cannot come out and attack the ICC now.”

Nevertheless, some would say Museveni’s outburst does reflect a sense that African leaders are uniting behind Kenya, and that hostility to the ICC is growing. Critics point out that all eight of the full investigations that the court has carried out to date have been in African countries.

Professor Macharia Munene, a lecturer in history and international relations at the United States International University in Nairobi, said African states feel targeted by the court, and may wish to turn their backs to it.

“They are now seeing the ICC as a tool out to punish Africa and they want to take control. There are leaders out there who have done much bigger things but nothing has been done to them [by the ICC],” Munene said.

For Munene, Museveni’s strong criticism of the court leads to the conclusion that “Africa may end up uniting to find solutions to their [own] problems”.

David Smith, writing in South Africa’s Mail and Guardian newspaper, said Museveni’s speech had increased the pressure on the ICC, particularly in terms of how it is perceived in Africa.

“So far, it is not Kenyatta on trial in the court of world opinion but the International Criminal Court, ICC, for which this [case] is seen as a defining moment,” Smith wrote. “[Museveni] highlighted a stain that the ICC seems unable to wash away – the perception that it is an instrument of the West that is inherently biased against Africa.”

The Ugandan president’s comments came amid simmering tensions around the whole ICC process in Kenya. Before the March 4 elections, foreign diplomats, including from the United States, warned Kenyans that there would be “consequences” for their country if they elected ICC suspects to high office. The UK said it had a policy of “non-contact” with state leaders facing trial at the ICC.

Despite their imminent trial for crimes against humanity, the election result was a ringing endorsement of the level of support that Kenyatta and Ruto enjoy at home. Kenyatta won the presidency with more than 50 per cent of the vote in the first round.

The new president used his swearing-in speech on April 9 to repeat his pledge to cooperate with the ICC. But he also gave western governments an indirect warning against meddling in Kenya’s handling of the ICC process.

“We must remember that no one country or group of countries should have control or monopoly on international institutions or the interpretation of international treaties,” he said.

In similar vein, Ruto used his speech to refer to the “consequences” cited by foreign diplomats in the run up to the elections.

“Many of you did not believe that we will win this election, because it was said that choices have consequences, and that if you vote for Uhuru [and] Ruto there will be consequences,” he said to rapturous applause. “But look at what happened – people of Kenya did not just vote and make us win, but they did it in round one.”

Despite the negative rhetoric about the ICC in Kenya and other parts of Africa, some analysts believe Museveni was really pursuing a different aim.

Moses Chelang’a, a lawyer and political analyst in Nairobi, said that rather than taking Museveni’s words at face value, they should be seen as reflecting an aspiration to position himself as statesman for the whole East Africa region.

“Museveni was endearing himself to President Kenyatta by placing himself as a friend in time of need, but in essence he is interested in his position in the East African Community,” Chelang’a said. The community is a regional inter-governmental bloc consisting of Burundi, Rwanda and Tanzania as well as Kenya and Uganda.

After 27 years at the helm in Uganda, Museveni is keen to flex his political muscles and show he can represent the interests of Kenya and other East African states on the international stage.

“He [Museveni] has always wanted to be seen as the one with the clout in the [East African Community], and now he wanted to demonstrate to Uhuru [Kenyatta] that he has that clout,” Chelang’a said.

While Kenyan leaders old and new have pledged to cooperate with the ICC, they have made no secret of their opposition to its investigations in their country. Since the ICC began its investigations in 2009, Kenya has petitioned the United Nations Security Council to defer the cases, and applied to The Hague for them to be referred back to the national judiciary.

During campaigning for the March election, Kenyatta described his election bid as a referendum on the ICC.

While the ICC’s critics are keen to portray it in a negative light, Chelang’a points out that African leaders do not share a uniform position on the merits of the court. Instead, their view of the institution seems to depend on whether it is they or their opponents who face charges.

“[President] Joseph Kabila of the Democratic Republic of Congo is happy to have the rebels at the ICC, and [President] Alassane Ouattara of Ivory Coast will tell you it was the best thing to have former president [Laurent] Gbagbo face charges in ICC, while Kenyatta and [Sudan’s president Omar] al-Bashir will have no kind words for the court,” Chelang’a said.

Although it sometimes looks like the ICC has focused solely on African countries, analysts point out that those states that signed up to the court did so voluntarily, and in most cases they themselves invited the ICC to come in and investigate conflict situations.

The cases of Sudan and Libya came to the ICC by another mechanism, referral by the UN Security Council.

It was in fact only in the Kenya case that the ICC intervened of its own accord.

“There is some truth in it, that the ICC has focused on Africa, because all the situations are from Africa,” Musila said. “[But] African leaders seem to be unaware that each and every action they take has consequences. Like when they sign treaties.”