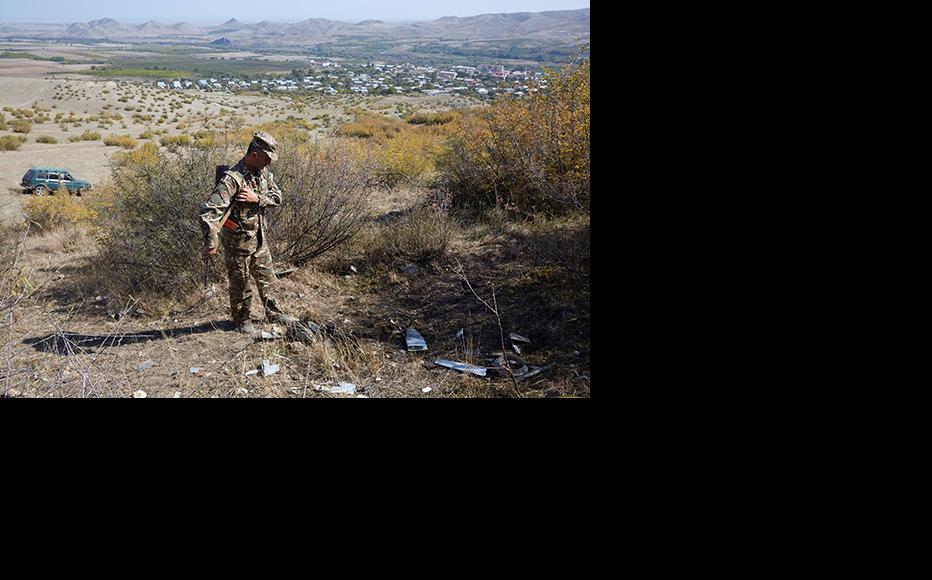 A soldier inspects the remains of a downed Azeri drone on the outskirts of Askeran on October 13, 2020 in Nagorno-Karabakh. (Photo: Alex McBride/Getty Images)
The link has been copied

Azerbaijan’s use of combat drones purchased from Turkey and Israel appear to be changing the balance of power in the Nagorny Karabakh conflict.

The large-scale hostilities, ongoing since September 27, have gone far beyond the line of contact, with civilian casualties reported on both sides. Experts note that the scale of hostilities, including the use of precision-guided weapons, has already exceeded previous escalations in the early 1990s and in 2016.

Video footage of strikes in which an unmanned aerial vehicle (UAV) carrying several kilogrammes of explosives explodes upon impact with a target have been widely shared online.

“This is a fifth generation war, where combat drones, artillery and missile systems are used very intensively. The density of the firing is simply off the scale,” said Artsrun Hovhannisyan, a special representative of the Armenian Defence Ministry.

In recent years, both Armenia and Azerbaijan have invested seriously in weapons purchases. Armenia’s main supplier is Russia. Azerbaijan also buys weapons from Russia, but also from Israel and Turkey.

According to the Stockholm Peace Research Institute (SIPRI), Azerbaijan’s main arms supplier from 2014 to 2018 was Russia (51 per cent of all purchases), Israel (43 per cent) and Turkey (2.8 per cent). Over the past five years, Russia supplied more than 90 per cent of Armenia’s arms.

According to Armenia, Azerbaijan is using Turkish combat drone Bayraktar TB2 along with Israeli reconnaissance and patrol drones Heron TP and Hermes 4507, as well as kamikaze drones Orbiter 1K and Orbiter-3.

“This is how Israeli-produced drones work: UAV Hermes 4507 is a ‘command centre’ that rises into the air deep into the rear and actually manages the operation of reconnaissance and combat drones,” said military expert Leonid Nersisyan. “Reconnaissance drones are designed to detect the firing positions of Karabakh air defence, and combat drones are designed to destroy them.”

The main difference between this and previous rounds of fighting, he continued, was the use of a wide range of reconnaissance and combat drones.

Azerbaijan had used combat drones particularly intensively in the first days of the war, added Hovhannisyan.

“According to our calculations, on the first day of the war, there were about 1,000 combat drones in the sky at once on the south and north areas of hostilities,” he said. “Their intention was to disable the air defence system and firing positions of the Karabakh defence army. This goal has been partially achieved.”

Hovhannisyan added, “This is not a war for people with machine guns, but for drones, artillery and missile systems.”

Armenian fighters confirm coming under fire from a barrage of drones.

“This is not the war that we fought in 1992-1994,” said Narek Hovhannisyan, a participant of that first war and now a volunteer on the frontline. “For ten days, our unit used a Kalashnikov rifle only once. All other days, drones and cannon shells were pouring down like hail. Soldiers use shovels [to dig defensive trenches] more than arms in this war.”

Armenia had shared video footage depicting the destruction of Armenian armoured vehicles, arguing that this proved the use of the Turkish tactical long endurance Bayraktar TB2 UAV.

However, there was no official confirmation of the use of these weapons until October 5, when President Ilham Aliyev said that Azerbaijan had “some Turkish combat drones”.

With a ground-based station and control radius of 150 km, it is used for both reconnaissance and the destruction of ground targets. Manufactured by Turkish company Roketsan Roket Sanayi ve Ticaret AS, it can carry laser-guided bombs.

“This is a very powerful drone,” Hovhannisyan explained. “It was actively used in Syria, and it is difficult to find air defence systems that are capable of shooting them down with 100 per cent efficiency.”

It was also reported that Canada had suspended the export of its drone optics and laser guidance systems to Turkey following reports that Ankara had deployed dozens of UAVs to Karabakh.

Armenia announced on October 20 that it had managed to destroy a Bayraktar TB2, producing a photo of its debris on the battlefield.

Armenian Prime Minister Nikol Pashiyan stated that the destroyed Bayraktar “was [built] in September, and the ultra-modern camera was produced in Canada in June”.

“This fact proves Turkey’s direct involvement in the terrorist war against Artsakh [the Armenian term for Karabkah] and its preparation for it,” Pashinyan wrote on his Facebook page, later calling for countries supplying Turkey with hardware for the Bayraktar system to follow Canada’s example and suspend sales.

Armenia produces a lightweight reconnaissance drone, the Krunk (crane), which it is also using in Karabakh, although there is no available data as to the extent of its deployment.

In May year, local forces in Karabkah announced that they had successfully produced and tested their own combat drone, but again it is not known if these are being used.

“Judging by the nature of the hostilities, I assume that the Karabakh defence army uses only reconnaissance drones and did not have time to establish mass production of combat drones,” Nersisyan said.

For its part, the Karabakh Defence Army is trying to resist Azerbaijan’s domination of the skies over Karabakh with the Russian-made Osa and Strela-10 anti-aircraft missile systems.

These can be identified on videos released by the Azerbaijani defence ministry depicting the destruction of military equipment, but experts said that they were of limited use.

“It is difficult to detect and destroy the drones with them,” Hovhannisyan explained. “In addition, these systems are designed to destroy a certain number of drones, and the enemy, as a rule, uses a lot so that some of them reach their goal and destroy air defence systems.”

“[The drones] are small, often not made of metal, maneuverable, difficult to detect and destroy,” he added.

“This system can be enhanced with such Russian short-range air defense systems as Tor-M2 and Pantsir-S2,” he continued. “If Armenia and Karabakh want to change the situation on the battlefield, they should work on launching these systems for blockading the sky.”

However, in recent days Karabakh forces shot down two Turkish Bayraktar TB2 combat drones, indicating that its air defence system may have been reinforced.

“It is too early to say whether new air defence systems have been brought to Artsakh [the Armenian name for Karabakh], but the facts point to its enhancement, which can change the situation on the battlefield,” Nersisyan concluded.

Giving Voice, Driving Change - from the Borderland to the Steppes
Armenia, Azerbaijan, Karabakh
Crisis, Conflict, Technology
Connect with us