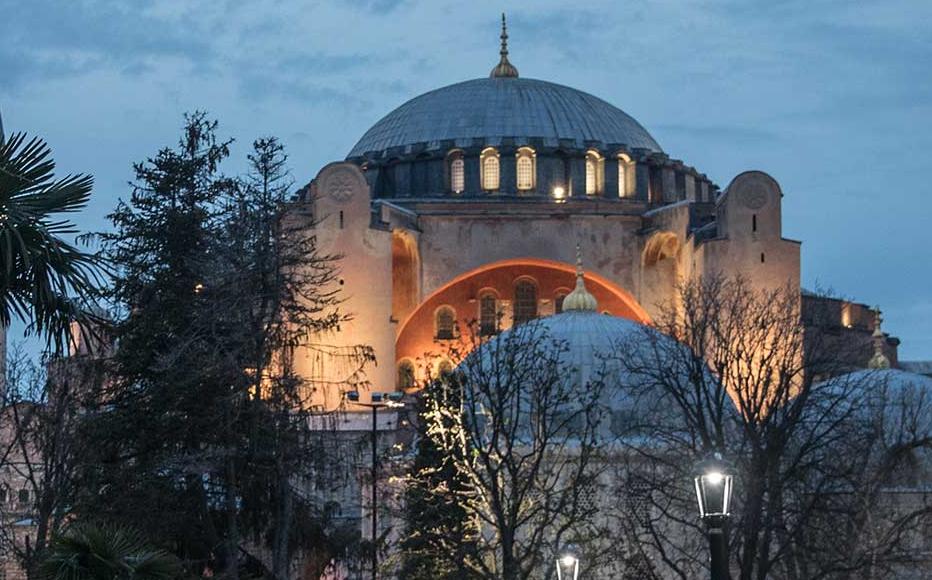 Women break their fast in front of the Hagia Sophia Grand Mosque on April 13, 2021 in Istanbul, Turkey. © Chris McGrath/Getty Images
The link has been copied

Zeynep Doğusan recounts how a friend was one day leaning against a pillar in a mosque behind the men’s section, admiring the view of the building. A mosque employee came up to her and said that she was not allowed to be there.

“Our friend really felt like she had been kicked out of the mosque,” Doğusan continued. “We couldn’t stay silent, so we carried out a [group] prayer, with an imam’s support, at the mosque where the incident took place.”

Doğusan is a co-founder of the Women in Mosques Platform, a campaign group set up in October 2017 in Istanbul to fight such discrimination in places of worship. Since then, the organisation has expanded to deal with issues ranging from access for the elderly in mosques to the absence or poor state of washrooms. Much of their energy is spent challenging customs - such as hiding female worshippers behind screens, or in side rooms - that make women feel they have less of a right to belong in mosques.

According to another co-founder, sociologist Zeynep Doğusan, these are all common phenomena.

“As a platform, our goal was to make these issues visible,” she said. “We aimed to raise awareness in the hope of reaching mosque administrators and possibly prompting change.” Social media has helped increase the group’s visibility and spread its message, Doğusan continued.

In Turkey, historically, Islamic tradition has tended to encourage women to worship at home. But those who work or study and spend their day out of the house need to use mosques to meet the requirement to pray five times a day. When they do, they often find their access restricted: women’s spaces are usually separate from the main dome of the mosque, taking the form of a small, screened-off area near the entrance.

“Who exactly decides which parts of the mosque women can and cannot be present? Don’t women have the right to benefit from the aesthetic and spiritual resources of the mosque and to be a part of it?” Doğusan said.

Kezban Karagöz, a human rights campaigner at the Zero Discrimination Association, said that women’s participation at mosques was on the increase. But Karagöz herself avoids attending places of worship because of negative experiences she’s had in the past.

“I feel the male gaze upon me, questioning my presence, when I go to the mosque, “she said. “I feel like they want me to hurry up and leave as soon as I take off my shoes to enter. I go to mosques to find peace, but I constantly fear an altercation, so I’ve started opting for mescits [small prayer rooms commonly found in public buildings in Turkey] in malls and so on,” Karagöz said.

Karagöz is also put off by the lack of washrooms for women in many mosques. While men can use public fountains, known as shadirvans for free, female worshippers must pay for the use of bathrooms, so they can remove their headscarves in private. Shopping malls and train stations, by contrast, where many prayer rooms are situated, have their own free, clean facilities.

“Why do we pay taxes?” Karagöz asked, suggesting that the Religious Affairs Directorate - the state body that oversees Turkey’s mosques - should be using its budget to provide facilities for women. Under the governing Justice and Development Party (AKP), the Directorate’s budget has been raised consistently since 2006, and stands at 12.9 billion liras (1.5 billion US dollars) for 2021. “Why do women need to pay to perform ablution while men can do it for free?”

The Women in Mosques Platform isn’t the only group campaigning on this territory. Havle Women’s Association, which works on a range of issues, also advocates on behalf of female worshippers.

“We wanted to become part of the mainstream feminist movement as Muslim women. There was a need to vocalise the oppression faced by Muslim women in everyday life,” said one of the founders, Rümeysa Çamdereli.

Male-dominated mosque administrations are among the reasons why women’s needs are left unmet, Çamdereli said, adding that many do not even give women a hearing, even if they are part of the congregation.

Begüm Yarar, a 21-year-old chemistry student at Necmettin Erbakan University in Konya, said that one of the biggest issue’s women face in mosques is the isolation of their section from the rest of the place of worship.

“Women’s quarters are often located far behind the main [mosque] structure and the dome,” she said. “I’m an art fanatic, I want to pray under the beautiful architecture decorated with calligraphy and ornaments, to look around and feel gratitude, so it makes me sad that this privilege is reserved for men only. Women are human as well. I think women should be allowed the same rights as men.”

Yarar also complained that the women’s sections were often located next to where worshippers remove their shoes before entering the mosque, which meant women had to pray with the smell of feet lingering in the air.

A 30-year-old imam based in Antalya, who asked to remain anonymous, disagreed with Yarar.

“It’s important to accommodate people’s religious sensitivities in mosques,” he told Inside Turkey. “It’s important to preserve the separation of men and women’s quarters in neighborhood mosques because it prevents gossip. If women’s quarters are visible, the tiniest thing such as someone adjusting their head scarf could lead to rumours, these things happen in small settlements. We have to think about these things, we can’t let rumours discourage the congregation.”

Women’s quarters are often separated from the men’s area with cloth-covered folding screens. The problem, Yarar said, is that this creates total isolation for female worshippers.

“Islam actually dictates that women stand one step behind men during prayer,” she said. “But women are completely separated from the congregation in mosques, as if it’s sinful for the two sexes to see each other. This doesn’t have a place in Islam, but it’s done in fear of fitna [temptation] - but you can’t do anything to stop it if there’s fitna in people’s hearts. This forces women to pray next to the door, where the shoes are piled up, with bad smells lingering in the air.”

Cemile Kocaman, a human rights campaigner in the Black Sea city of Trabzon, said that mosques were also important locations for Muslims from different congregations to gather, promoting a wider sense of belonging.

“Ramadan is a time when the sense of unity is heightened,” she said. “I used to run to the mosque after breaking my fast when I lived in Istanbul’s Fatih district. The atmosphere of worship there has always nurtured my faith. It’s also a place where many Muslims can come together, so mosques are crucial in ensuring diversity.”

But excluding women can also end up with them being pushed out of mosques altogether, Kocaman continued, explaining how her local mosque had been altered after restoration work.

“There was a historic mosque in Trabzon where I liked to pray ever since my middle school years,” she said. “Women’s prayer quarters were moved to a mescit located outside the building. This is so inconsiderate and selfish that this mosque I used to enjoy has turned into a place I don’t even want to visit. Praying in this mescit in the courtyard doesn’t offer me an experience any different than praying in a room at my house.”