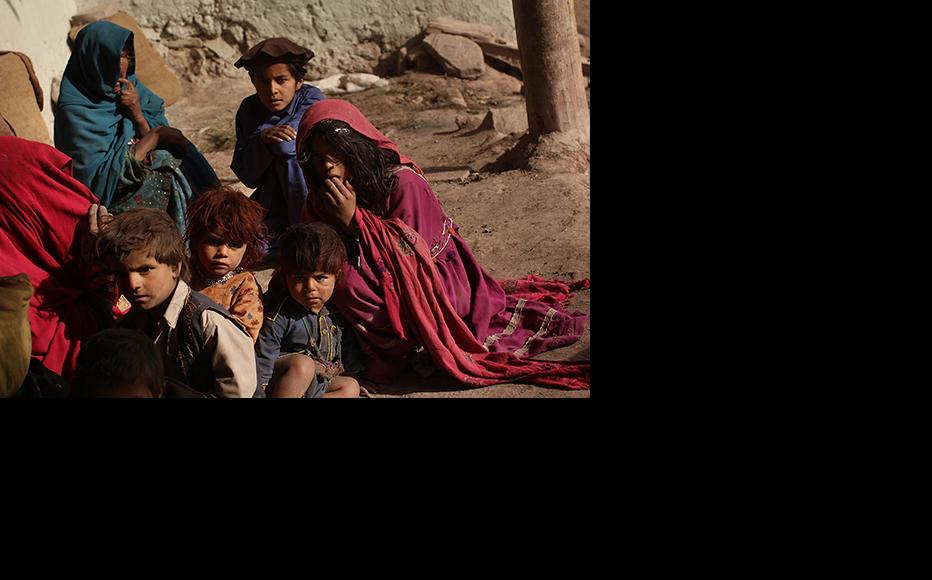 Women and children hide in a corner as their home is searched during a raid by the Afghan National Army. (Photo: Spencer Platt/Getty Images)
The link has been copied

At 11pm on the night of April 3, 2016, Bibi Sahra was woken by a group of armed soldiers storming into her family home.

The 37-year-old, from the village of Qala Taqai in Baraki Barak district, recounted how the door of the bedroom was kicked in and half-a-dozen Afghan army soldiers in camouflage gear entered. A voice booming out over a loudspeaker warned everyone not to move.

“Me and my husband Ajmal, who’s a farmer, and our three little daughters were terrified and took refuge in the corner of the room,” she said. “One of the soldiers, without any questions, immediately hit my husband several times with the butt of his Kalashnikov.”

Sahra said that she tried arguing with the soldiers as her girls began crying and screaming.

“A soldier pushed me and threw me into the corner of the room and I hurt my head, while they still were beating my husband,” she continued. “After that soldiers put handcuffs on my husband and blindfolded him with a black scarf, for as long as I live I’ll never forget how the soldiers beat my husband and took him away.”

Night raids are a controversial tactic long-used in Afghanistan as a counter-terrorism measure. For Afghans, any intrusion into private homes is considered highly offensive, and such raids are seen as an unacceptable violation of privacy. Together with civilian casualties, they have alienated many citizens from their own government and security forces.

Local doctors in the eastern province of Logar say that it is women who bear the brunt of the psychological trauma of such raids. Mental health specialists warn that many women are left with long-lasting fear and anxiety or suffer flashbacks.

Sahra herself is now receiving treatment at the Nayab Aminullah Khan Logari hospital in the provincial capital of Pul e-Alam.

She said that following the raid on her house – the only weapon found was a shotgun, which the soldiers confiscated – her husband was taken away, along with other men from the village.

Sahra spent the next four days trying to find out what had happened to him, approaching local officials, tribal leaders and village elders.

“Eventually on the fifth day, officials from the office of the Logar governor informed me that my husband had been imprisoned by the national directorate of security on charges of collaborating with the Taleban,” she said.

After eight months in prison, he was acquitted and released. But Sahra said that she has been left in a state of permanent anxiety by the events of that night, and suffers from constant headaches.

“The doctor told me that I have mental health issues and that I need to rest,” she said.

Night raids have always been a contentious measure. They caused huge resentment towards the NATO forces among ordinary Afghans, and in 2012 responsibility for such operations were transferred to Afghanistan’s national forces.

According to a memorandum of understanding, night-time missions to search civilian houses for insurgents were to be conducted by the Afghan military “in cooperation with United States special forces”, and in compliance with national law.

Then in 2013, the Afghan government under then-president Hamid Karzai pledged to stop night raids altogether.

However, his successor Ashraf Ghani quietly allowed them to resume. Military experts insist that such efforts are essential to disrupt and dismantle militant networks.

Defence ministry spokesman Dawlat Waziri told IWPR that these operations are a vital tool in their fight against the insurgents, allowing the security services “to accomplish major tasks with fewer forces and in the minimum time possible”.

Officials said that this year alone Taleban strongholds in Helmand, Baghlan, Kunduz and Nangarhar provinces had been destroyed as a result of night raids. More than 230 members of the Afghan security forces held hostage by the Taleban had also been freed from five locations around the country.

In one high-profile night raid in late April, the Taleban's shadow governor for Baghlan province, Mawlawi Lal, was killed along with a number of other insurgents in the Dand-e-Ghori area of Pul-e-Khumre city.

But in Logar, officials warn that such successes come at a high cost to local people.

Provincial council member Abdul Wakil told IWPR that people were living with the aftermath of such trauma in many of the province’s districts. Pul-e Alam, Baraki Barak, Charkh and Mohammad Agha districts had been particularly badly affected.

People from across Logar, especially from rural areas, had approached the council to complain about night raids by the security forces, Wakil continued.

Shima Zargar, director of women's affairs in Logar province, said that although it was usually men who were arrested, female family members suffered greatly as a consequence.

“Night raids, as well as the assassinations and kidnapping carried out by the Taleban, have caused terror among women, and as a result many have developed mental illness,” she continued, calling on the ministry of public health to build a dedicated psychiatric hospital in the province.

Rahela, 43, said that she had travelled to Peshawar in Pakistan to seek treatment at the Rahman Baba hospital following a night raid on her own home in November 2012.

She said that soldiers had blown up the gate to her compound in the village of Pork in central Logar before storming into her house where she and her husband were sleeping with their five children.

“I suddenly heard the sound of a strong explosion, the room filled with dust and the windows shattered. At the same time, I could hear my husband and my children screaming. A voice came over a loudspeaker and said that no one was allowed to leave their rooms,” she said.

“None of us at dared move. When I looked through the window, the soldiers had come into our yard and were approaching our room. I was still standing next to the window. The soldiers broke down the door to our bedroom and came into the room.

“My husband and I have two girls and three boys. My eldest son is 25 years-old. We all stood there in the corner of the room shaking with fear. Then an Afghan soldier shouted at us to put our hands up and I saw foreigners come close and put black hoods over the heads of my husband and my [eldest] son and took them away.”

The soldiers then went into the room next door where Rahela’s brother-in-law and his three children were sleeping. Her husband, brother-in-law, eldest son and a nephew were all taken away by the troops.

“Later, a translator came and told us to leave our rooms and go into the yard…They took us away about 100 metres into a wheat field and made us stand there for almost two hours, barefoot.”

Rahela’s brother-in-law and nephew were detained in Baghram prison for three months before being released.  However, her husband and eldest son were imprisoned for 18 months before finally being allowed to return home.

More than four years later, Rahela said that she was still mentally scarred by the events of that night. Every time she hears the sound of aircraft or sees men dressed in Afghan National Army uniforms, she begins to shake with fear and has a flashback to the night of the raid.

Syed Jalil Ahmad, a neurologist in Logar province, adding that if left untreated chronic stress could lead to clinical depression. They often complained of insomnia, difficulty in breathing, loss of appetite and high blood pressure.

“Sufferers live in a constant state of fear,” he concluded.

Haji Syed Habibullah, a 56-year-old from the village of Pangram in Charkh district, also said that he would like to take his wife to Peshawar for treatment to help her overcome the trauma of a night raid on their house four years ago.

He related how Afghan soldiers had woken him and his family at gunpoint in the early hours of April 26, 2013.

“The soldiers took me and my wife along with our four youngest children to another room where my older sons were sleeping. They took my mother along with my two older sons to the yard. They blindfolded and beat me brutally in front of my kids, my wife and my mother. My wife and children screamed and cried. When they pulled me out of the house they searched my home.

“Then they put me in a military helicopter that had landed near our house and took me to Kabul where I was imprisoned for eight months. They accused me of being a Taleb and involved in fighting in Charkh district. I was accused of placing roadside bombs for Afghan troops, involvement in armed attacks on Afghan military outposts and of terrorising girls to prevent them attending school in Charkh district.”

Habib was released after a Kabul court proved his innocence. His wife Shazia, however, found it harder to recover and complained of constant headaches and frequent night terrors.

The district clinic had been unable to help her, and several visits to the Nayab Aminullah hospital in Pule-e-Alam had also made little difference to her mental state.

“Many of my friends have advised me to take Shazia to the Rahman hospital in Peshawar, Pakistan, but since I barely have money to take her from our village to Pul-e-Alam, how can I take her to Peshawar?” Habib said.

Logar governor spokesman Salim Saleh said that Afghan and US forces had carried out around 60 night operations in the province over the last year.

“Although the night raids by government forces have been successful, and these operations have had a significant role in cracking down on the Taleban, they have also spread horror and terror among the public,” Saleh said.

Military experts stress that gathering detailed and accurate intelligence ahead of such raids was vital to safeguard civilians.

“If we have accurate information about the target, then we can quickly eliminate and destroy the enemy,” said Atiqullah Amarkhel, a former ANA general who is now a defence analyst. “If this information is not correct, unfortunately, innocent people will die. Taleban fighters try to take shelter in houses and place their fighters among the civilian population and when the security forces target these areas, that’s when civilians also die.”

Civil society activist Mohammad Musa Mahmoudi said that ordinary people found themselves trapped between the government and the insurgents. Night raids were traumatic, he said, but so was the intimidation, kidnapping and assassinations carried out by the Taleban.

At least the government followed legal process when carrying out arrests, Mahmoudi continued, whereas the armed insurgents simply acted with impunity.

The public could not live lives free of fear as long as the current situation of insecurity and poverty continued, he said, adding, “As long as security is not guaranteed, jobs aren’t created and women's rights continue to be denied, it’s impossible to talk about reducing mental illness and psychological problems.”