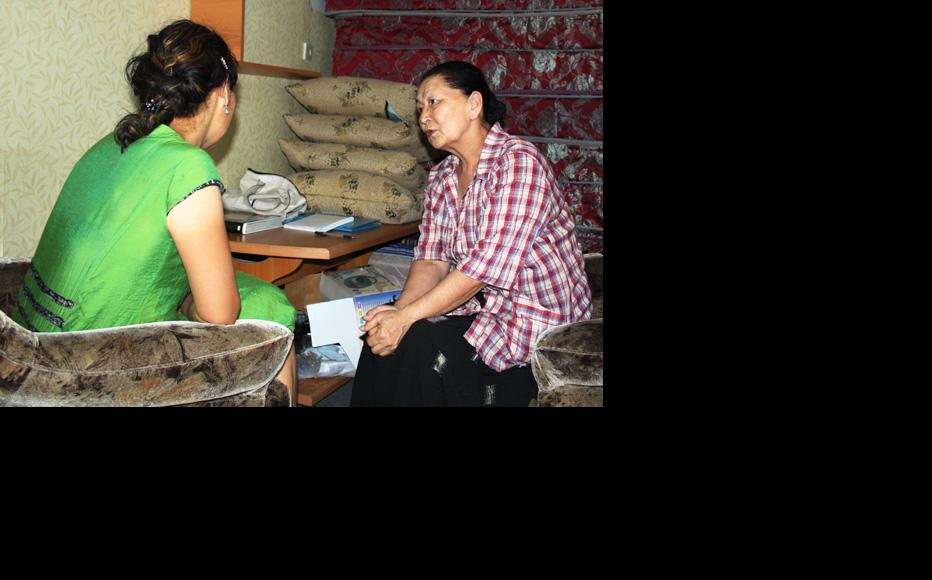 Bubusara Ryskulova, head of the Sezim crisis centre, talks to a woman who is seeking help. (Photo: Jyldyz Albanova)
The link has been copied

The few women’s crisis centres that exist in Kyrgyzstan are finding it hard to carry on as the international donor support they rely on is drying up.

In the absence of domestic charity fundraising opportunities, the best hope seems to lie in applying for state funding.

But with the Kyrgyz government itself seeking bail-outs from Russia and other countries to cover its most urgent expenditures, there is unlikely to be much spare cash around.

There are currently 12 crisis centres for women across the Central Asian state, according to Alexandra Yeliferenko, who heads an association bringing these groups together.

Most are able to offer legal advice, counselling, and where necessary food and medicines to women who suffer abuse in the home or who find themselves destitute. Few, however, can offer shelter to victims of domestic abuse.

“Crisis centres don’t have the resources to maintain temporary refuges,” Tahmina Ashuralieva, coordinator of a domestic violence protection project, said. “To do so, they need premises and the cost of food, utility and staff wages.”

Until recently, Sezim was the only group with the resources for a shelter for abused women, located in Bishkek. Two more have now opened in the southern cities of Osh and Jalalabad in response to the ethnic violence this June that left over 400 people dead and left widespread devastation of buildings and social disruption in its wake.

Rights activists say the international donors that have provided training and grants for women’s crisis centres over the last ten or 15 years are now encouraging them to sustain themselves from other funding sources.

“The support provided by international organisations has now come to an end, as they believe that this is the state’s problem; that it’s up to the state to take care of its own citizens,” Mahabat Turdumamatova, who heads the domestic violence and gender discrimination department at the Kyrgyz ombudsman’s office, told IWPR.

Turdumamatova said that under Kyrgyzstan’s National Action Plan for Gender Equality, local government should be providing crisis centres with office space, and contracting them to provide welfare services in cooperation with police and the healthcare system.

“This doesn’t always happen in practice,” she conceded.

Bubusara Ryskulova, the head of the Sezim group, says her group has been given premises by the Bishkek mayor’s administration, as has the Ak Jurok crisis centre in Osh.

“But that isn’t enough,” she said, explaining that the need to assist vulnerable women was greater than ever. “When unemployment is rising, the economic situation is getting worse, the flow of labour emigration is increasing, and all this increases stress levels, then it becomes essential that international donors and the government support crisis centres.”

Kyrgyzstan passed a law in 2008 allowing the government to contract NGOs to carry out social programmes on its behalf.

Yeliferenko agreed that government funding was now the main option still remaining, but she noted that despite the 2008 law, government spending constraints meant there were currently few state-funded projects on offer to NGOs.

Aziza Abdurasulova, head of the Kylym Shamy human rights group, agreed that more help from the state was essential, but noted, “This is a problem that faces not just crisis centres, but also the entire NGO sector in Kyrgyzstan.”

Abdyrasulova suggested Kyrgyzstan could copy models used in other countries where taxpayers can elect to have a small proportion of their taxes paid to charity.

Aida Alymbaeva, director of the Social Studies Centre at the American University in Central Asia argues that with government finances in such a dire state, NGOs including women’s groups cannot rely wholly on state funding.

“The state is already doing its bit by maintaining children’s homes, rehab centres and other institutions,” she said. “We should now be working to develop a culture of charitable giving in society. Responsibility for promoting such a culture rests with business and with successful individuals. Hollywood stars, for instance, give charitable donations and set an example to others. Here, such actions are one-offs.”

Ryskulova doubts that groups helping women in difficulties will become a magnet for private donors.

“Charity isn’t at all well-developed in our country,” she explained. “Sometimes people bring humanitarian aid to our centre, but that happens very rarely. Wealthy people sometimes provide assistance for disabled institutions or children’s homes, but crisis centres are not generally a focus of attention for benefactors or sponsors.”

Kyrgyzstan
Women's rights
Connect with us