Top Footballer Among Six Arrested After Journalist Killed in Azerbaijan

Top Footballer Among Six Arrested After Journalist Killed in Azerbaijan 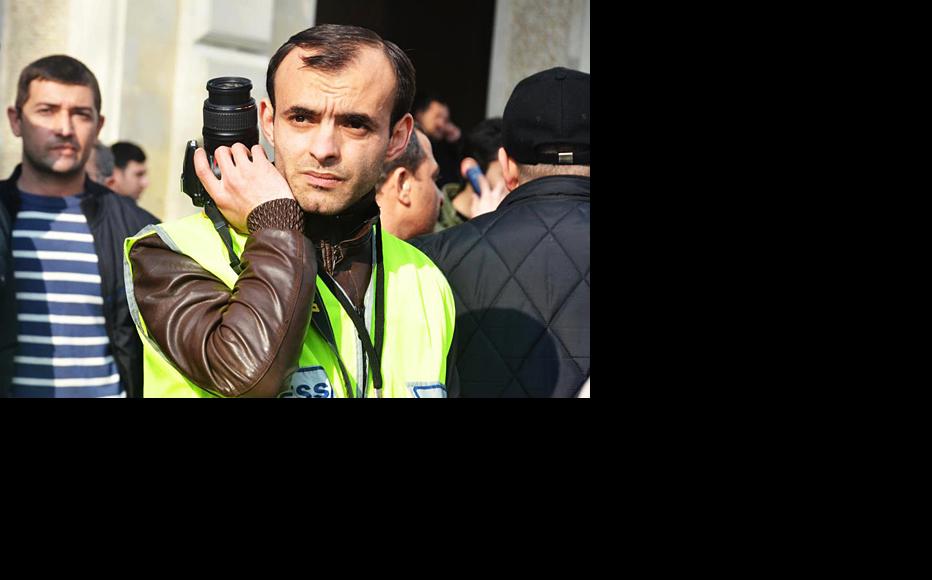 The late Rasim Aliyev. (Photo: Fargana Novruzova)
The link has been copied

Well-known Azerbaijani footballer Javid Huseynov has been arrested with five others in connection with the death of a journalist who criticised him and was then attacked. Rasim Aliyev died of his injuries in hospital on August 9.

Aliyev was a long-running member of the Azerbaijan media rights watchdog, the Institute for Reporters’ Freedom and Safety (IRFS), and since October 2014, its chairman, and had reported receiving threats about his activity before the football controversy began.

Javid Huseynov has played for the Azerbaijani national squad as well as his own team, Gabala FK. Aliyev, who worked for the Ann.az news website, posted a Facebook message criticising the footballer for his behaviour during Gabala FK’s Europa League qualifier against Cypriot team Apollon. After his team won, Huseynov carried a Turkish flag onto the field, and when asked about this anti-Cyprus statement at a post-match press conference, made what looked like rude hand gesture.

“I don’t want a footballer who is ignorant, unethical and unable to behave himself to represent my country in Europe,” Aliyev commented.

He received abusive messages in response, but he believed the matter had come to a close after Huseynov himself telephoned him and said he had merely been trying to express Azerbaijani solidarity with Turkey.

Aliyev said he subsequently received another phone call, this time from someone who said he was Huseynov’s cousin and who arranged for him to meet the footballer over a cup of tea.

“I got out of the car and there was someone standing there. I stretched out a hand to greet him and suddenly several people attacked me and started kicking and punching me,” he said, interviewed while in hospital.

He was taken to hospital the same day, August 8, and operated on overnight when his breathing worsened. He had four broken ribs and other injuries, but doctors said the main problem was massive internal bleeding. He died later on August 9.

Relatives claimed that if doctors had treated the injured man sooner, they would have noticed and stopped the bleeding.

After hearing the news, Gabala FK immediately suspended Huseynov from the squad and sent its condolences to Aliyev’s family.

Police arrested five individuals identified from CCTV footage of the crime scene, and charged them with “grievous bodily harm resulting in accidental death”. Huseynov was accused of “covering up a serious crime”.

Azerbaijan’s president, Ilham Aliyev, described the journalist’s murder as a threat to freedom of expression and media independence. His political advisor Ali Hasanov said the president was taking a close interest in the case and would ensure the culprits were caught and punished.

In an email, IRFS said that “prior to the Facebook post in question, Rasim Aliyev had already been receiving threatening messages connected to a series of photos he had posted online showing police brutality and social discontent, such as protesters carrying a banner reading ‘Resign’. Rasim Aliyev reported receiving a threat stating, ‘You will be punished for these photos’. He publicised the threat on 25 July and filed a complaint with the police, who failed to take action to protect Rasim Aliyev.”

Aliyev was elected chairman of the IRFS in October 2014 after its head Emin Huseynov went into hiding at the Swiss embassy in Baku in August 2014. The Azerbaijani authorities had frozen IRFS’s bank accounts, searched its offices, and seized equipment and documents. Huseynov was flown out of Baku on June 11 this year on the plane of Swiss foreign minister Didier Burkhalter, who was in town to attend the opening of the European Games.

Aliyev is the fourth journalist to be attacked and killed in Azerbaijan in recent years. Elmar Huseynov, editor of the Monitor magazine, was shot dead in 2005, photojournalist Alim Kazimli died shortly after being beaten up by police officers the same year, and Rafiq Tagi, accused of criticising Islam, died of a stab wound in 2011. Many more have been seriously injured because of their line of work.

“So many journalists have been the victims of violence and murder,” journalist Ayten Farhadova said. “And not one of the culprits has been found. Their identities have remained unknown and the cases unsolved. I am hoping that Rasim’s killers will receive just punishment.

Aliyev’s death prompted an international outcry from media rights groups and others. The European Union’s external affairs office called for a “full and transparent investigation of this case”.

“The EU supports the principles of freedom of expression and freedom of the media, which are fundamental elements of a democratic society. Azerbaijan needs to promote a safe environment for journalists and other media representatives, enabling them to carry out their work without fear of violence or persecution,” the statement said.

Azerbaijan
Journalism
Connect with us