Arguably the country's most popular woman politician, Sister Maha is not short of critics.

Arguably the country's most popular woman politician, Sister Maha is not short of critics. 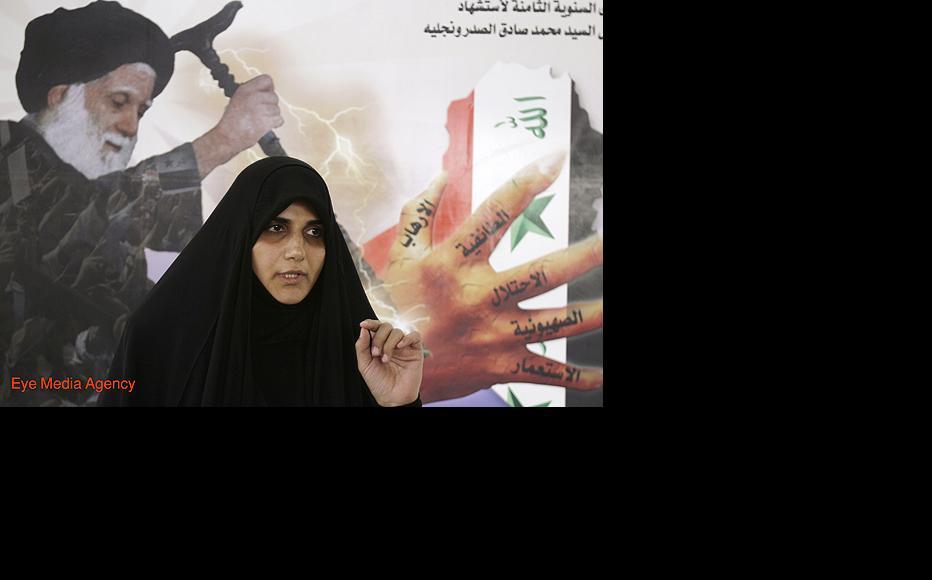 As Maha al-Douri waits for her second term in parliament, she is caught between conflicting public perceptions - a hero to the poor and oppressed to some, and anti-American Shia hardliner to others.

Based on this year's election results, Douri may be the most popular and powerful woman in Iraqi politics today. She is also a staunch supporter of firebrand cleric Moqtada al-Sadr. Douri openly admits some of her views are considered "radical", but sees no conflict with her progressive, humanitarian ideals. Others disagree.

Douri, known as Sister Maha in her power base of Baghdad’s Sadr City, won nearly 32,000 votes in the March 7 parliamentary vote, making her Iraq's top-performing female candidate and the highest vote-getter from the Sadrist bloc. Her political ascent has been fueled by strong support from the Shia population of Sadr City, and marked by her commitment to education, religious values and the plight of women, widows and orphans.

Yet Douri has also spoken out strongly against the role of the United States in Iraq, saying the American occupation has “left nothing but destruction, broken families and prisoners”. In the past, she has called for the government to enforce Sharia law across the country.

Her critics see Douri’s prominent role in the Sadrist movement as a public relations ploy; as window dressing for the hard-line, Shia movement and an apologist for the controversial Sadr whose Mahdi Army was involved in the sectarian violence of 2006-2007.

"Even if Maha al-Douri did well in the election, it doesn't mean she will serve women's issues. We have seen how much her party supported her, so what she does in parliament will be in the best interests of her party and bloc, not the best interests of Iraqi women," said Jinan Mubarack, head of the NGO Iraqi National Centre for Rehabilitation

Mubarack doesn't believe Douri's brand of radicalism is conducive to the protection of human rights. "Of course, those two approaches could never be combined in one personality," Mubarack told IWPR.

But Douri sees no conflict between her strident anti-occupation stance and her work on social issues.

"If my links to Moqtada al-Sadr and my rejection of the occupation are considered radical, then I have to admit that I am a radical. I believe in my country, and that it will continue to suffer as long as the occupier is on our land," Douri told IWPR.

"My beliefs don't conflict with my advocacy work. Moqtada [al-Sadr] was one of the first leaders in Iraq to start programmes for widows and orphans, as well to demand better schools. We are politicians working for our people, so I don't think we can be branded radicals just because we are against the occupation."

Douri, 38, is a complex public figure. Born into a Sunni family, she converted to the Shia faith as a student in the late 1990s when she found inspiration in the teachings of Mohammad Sadiq al-Sadr, Moqtada's highly revered father. In interviews, she has said that when she converted, her family disowned her. Later, when she married a Shia, she said her family threatened to kill her.

Douri studied veterinary medicine at Mustansiriyah University in Baghdad and became an assistant professor there in 2000. Two years later, she was fired for refusing to join the Baath Party of former dictator Saddam Hussein. Instead, she joined the Sadrist movement and fled to Syria.

She returned to Iraq with her husband and two children in 2003, and quickly relocated from the Sha'ab district to the heart of Sadr City. In this impoverished district of some three million Shia, Douri opened the Maha al-Douri Education Centre and began holding lectures on religion and social issues and classes in basic education.

"Dr Maha al-Douri is very popular in Sadr City because she helps people, especially widows and the poor. She opens her house twice a week to receive people and help through her charity. She attends Friday prayers every week, and I heard that Moqtada personally asked her to participate in the election because of her popularity," said Awatef Hussein, 30, a factory worker in Sadr City.

In the 2005 election, Douri was elected to represent Sadr City. Iraq's quota system mandating that 25 per cent of lawmakers be women may have been a factor five years ago, but not in the most recent election. This year, Douri won enough votes to be elected without the quota system and won the third highest amount of votes in the Iraqi National Aliiance to which the Sadrists belong.

As a parliamentarian, Douri called for women to play a bigger political role in Iraq, and helped draft a still-pending law on violence against women and children. She served on parliament's community complaints committee in which she pushed for improved public services, including electricity, sanitation and clean water. Douri described her role in government as "a bridge between people and officials".

Safiyah al-Suhail, a legislator from the predominantly Shia State of Law coalition who has worked with Douri over the past five years, described her as a champion of Iraq's women and children. Still, Suhail attributes some of Douri's success to the strong backing over the Sadrist movement.

"I am close to Maha al-Douri but I want to point out that her large number of votes and popularity in Sadr City does not mean she is the best female politician in the new parliament. Her campaign was controlled by political circumstances and outside support," said Suhail.

The Sadrist bloc won 40 seats in the next 325-seat parliament, and the movement is generally credited with doing the best job of promoting its female candidates.

"In reality, it is not Maha al-Douri who won the majority of women's votes and did so well in the last election. It was the Sadrists' well-organised electoral plan that got her the huge win. I bet Douri did not win a single vote outside of Sadr City," said Ibrahim al-Sumaidei, a Baghdad political analysts and newspaper columnist.

Yet even Sumaidei admits that Douri's performance in parliament has been impressive.

With her strong support from Baghdad's women and urban poor, Douri is focused on the role of female legislators in the next parliament, and beyond.

"It is my dream that this generation of women politicians will do things to help our people that will be remembered in Iraqi history. Our duty is to oversee the government's performance. I would also like to work with my colleagues to heal the wounds left by the occupier after it withdraws. The occupation will leave us a ruined country, and it will take all our efforts to fix it," said Douri.

"As a politician and as an ordinary citizen, my responsibility is to do anything to help Iraq."