International watchdogs say Leyla Yunus and her husband Arif are in trouble for upholding human rights, not helping Armenian intelligence.

International watchdogs say Leyla Yunus and her husband Arif are in trouble for upholding human rights, not helping Armenian intelligence. 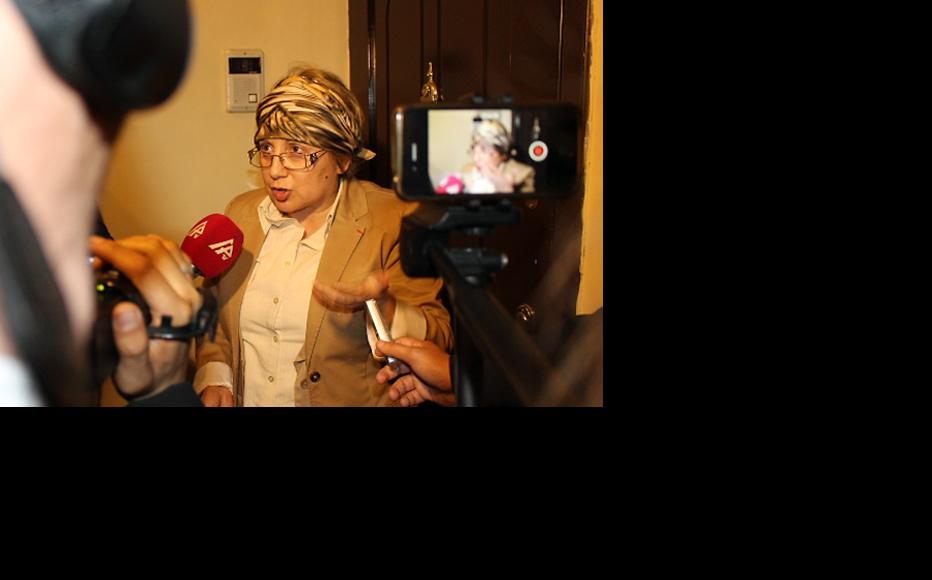 Leyla Yunus while her home was being searched in May 2014. (Photo: Afgan Mukhtarli)
The link has been copied

A court in the capital issued the custody order on August 30, just hours after Yunus was formally arrested. Prosecutors presented allegations that Yunus and her husband Arif had collaborated with the secret service of Armenia – Azerbaijan’s sworn enemy.

A joint statement from the prosecution service and the National Security Ministry said the couple’s alleged links to Armenian intelligence emerged during an investigation into similar espionage charges levelled against journalist Rauf Mirqadirov.

In April, Mirqadirov was summarily detained and sent to Azerbaijan by the authorities in Turkey, where he had been resident since 2010. He too is accused of passing secret information to Armenia. His lawyer said he regarded the charges as absurd. (See Azerbaijani Journalist Accused of Spying for Armenia.)

In a sign that the espionage case could expand further, the official statement on the Yunusov case said that as well as providing Armenia with information themselves, the couple acted as “intermediaries” for contacts with other, as yet unnamed, individuals in Azerbaijan.

Leyla Yunus, director of the Institute of Peace and Democracy, is charged with six offences including treason, extortion and tax evasion. Arif Yunus is charged with treason and extortion, but is at home under strict house arrest.

In May, Leyla and Arif Yunus were detained while about to board a flight in Baku and brought back for questioning about her ties to Mirqadirov. Her husband was not interrogated as he became seriously ill after their detention. (Reported in Leading Rights Activist Questioned in Azerbaijan.)

This week, Leyla Yunus was first taken to the prosecution service’s serious crimes unit, and after questioning, to the Nasimi district court. The hearing lasted over three hours and was held in closed session, with neither relatives nor reporters admitted.

Speaking afterwards outside the courthouse, defence lawyer Javad Javadov said his client denied all the charges brought against her.

“Leyla Yunus states that her arrest has to do with her activities as a human rights defender,” Javadov said.

The lawyer said he had been forced to sign a document agreeing not to disclose confidential information relating to the investigation.

“An appeal against the Nasimi district court’s decision will shortly be filed,” he added.

Also speaking outside the courthouse, Arif Yunus said his wife was picked up by plainclothes officers while setting off to attend a conference.

“Leyla went out of the house. I was watching out of the window. When the car she was in was heading out of the courtyard, five or six individuals barred the way. Two of them got into the back beside Leyla and another one got in beside the driver,” he said. “I immediately phoned her, but she did not pick. I realised Leyla had been arrested.

“Then someone knocked on the door. Individuals in plain clothes demanded that I open up, but I waited till a lawyer arrived.”

Arif Yunus went to see prosecution investigators but refused to give them a statement.

“I told them this criminal case had been launched on political instructions had no legal basis whatsoever,” he said.

Yunus compared the questioning to the Stalinist era.

“I’m a historian and I have studied the Soviet repressions of 1937. I know what questions they used to put to innocent people during those investigations,” he said. “The questions addressed to me were identical to those ones.”

A charge of spying for Armenia, with which Azerbaijan has never signed a peace deal since open hostilities in the Nagorny Karabakh conflict ended in 1994, is considered especially heinous.

As with Mirqadirov, prosecutors appear to building their case on various long-running cross-border projects in which Azerbaijani and Armenian NGOs try to build connections between the two societies.

The idea is that people-to-people contacts, sometimes described as “track two diplomacy”, will foster greater understanding and a more conciliatory approach despite the tensions between the two governments. In the past, the authorities in Azerbaijan have tolerated such activities. (The hardening attitude is discussed in Fears for Azeri-Armenian Citizen Diplomacy.)

“Leyla Yunus is yet another independent voice in Azerbaijan who for a long time the government has tried to silence through threats and intimidation,” Natalia Nozadze, Amnesty International’s researcher on Azerbaijan, said in a statement. “Failing to achieve this. they have now resorted to trumped up charges and detention in order to punish her for criticizing the government,”

Rachel Denber, deputy director for Europe and Central Asia at Human Rights Watch, said the charges against Leyla and Arif Yunus were “bogus and intended to silence them”.

“The authorities should immediately end this campaign of intimidation against Azerbaijan’s leading human rights defenders and allow them to work unimpeded,” she said.

Government officials have so far refrained from commenting on the case, but some of their supporters have already pronounced a guilty sentence.

“Leyla Yunus has betrayed her country and nation,” Malahat Ibrahimqizi, a member of the president’s Yeni Azerbaijan parliament, said in remarks quoted by the Trend news agency.

Arguing that Yunus had done Azerbaijan more harm than the country’s enemies abroad, Ibrahimqizi said, “What can you expect from someone who can’t speak their own [Azeri] language?”

Rufiz Qonaqov, head of the Centre for International Relations Studies in Baku, told the same news agency that his organisation had always suspected Yunus was up to no good. Apart from anything else, he said, she described convicted criminals as political prisoners just to give Azerbaijan a bad name in the international community.

“These people must be punished for their activities against the country and the state as a lesson to others who engage in this kind of activity, or are intending to,” he said.

In contrast, the National Council of Democratic Forces, a coalition of Azerbaijani opposition parties, called for Leyla Yunus to be released immediately. It noted that she had worked hard to compile comprehensive lists of political prisoners, but that she “now finds herself among those she has defended”.

“All people with a conscience in this country must stand side by side with her,” the group said.

The day before she was arrested, Yunus wrote an open letter to President Ilham Aliyev demanding the release of all political prisoners in Azerbaijan.

“Get a grip on yourself. It’s never too late to stop,” she told the president. “Think about it – you could go down in history as a tolerant, pragmatic politician rather than as a dictator and tyrant who drenched the country in blood.”