Allowing schools to reopen and reconstruction projects to go ahead seen as sign of pragmatic attempt to win public favour.

Allowing schools to reopen and reconstruction projects to go ahead seen as sign of pragmatic attempt to win public favour. 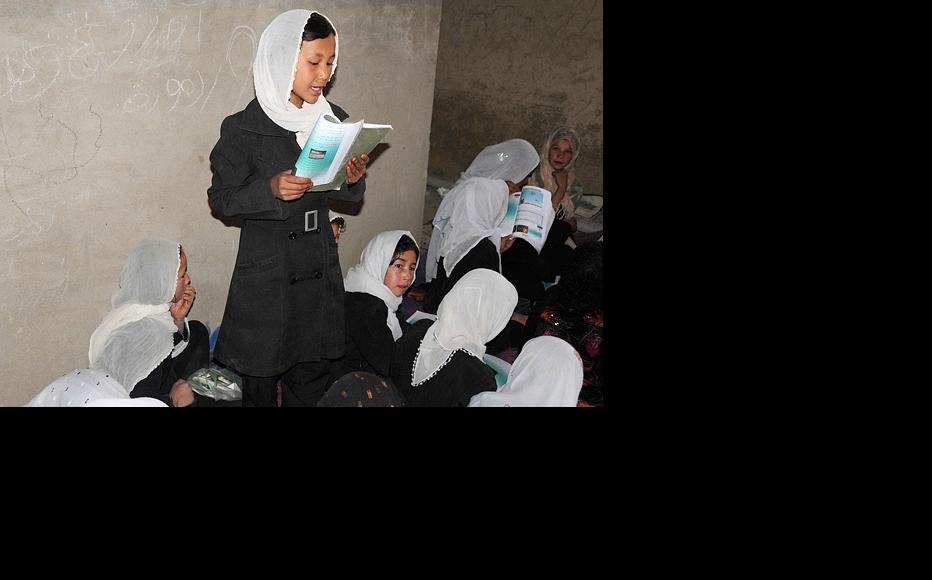 An Afghan schoolgirl in Ghazni – where the Taleban have agreed to reopen schools. (Photo: U.S. Air Force photo by 1st Lt. Katherine Roling/ISAF Public Affairs)
The link has been copied

Experts in Afghanistan say the softer line the Taleban are taking on issues like education and reconstruction projects are a tactical ploy to win broader popular support.

A Taleban leader was recently quoted by Afghan media outlets as saying the movement was not opposed to education and would protect schools in areas they controlled.

The announcement was welcomed by the education ministry in Kabul, and by President Hamed Karzai, who told university graduates that “if it is proved that [Taleban chief] Mullah Omar has really ordered the Taleban not to prevent children from accessing education, I will thank him”.

In a telephone interview, Taleban spokesman Zabihullah Mojahed told IWPR that his movement was not against education and was keen to have public support.

“The Taleban are the children of the people; they have emerged from among the people,” he said. “The Taleban have always tried to be close to their people and to get their support.”

People living in areas under Taleban control report a relaxation of the insurgents’ strictly-regimented rule over the last year. Some experts see this as a sign the insurgents are readying themselves to take on a more political role within Afghanistan.

When the Taleban were in charge of Afghanistan between 1996 and 2001, schools and colleges only accepted male students, and women and girls were routinely denied access to education. At the time, the Taleban said they were not opposed to female education, just to mixed-sex classes.

After the Taleban were ousted in 2001, insurgent groups often attacked schools, set them on fire and forced them to close down. In recent months, however, schools in areas they where they operate have been allowed to reopen.

Rahimullah, a father in the Andar district of Ghazni province in southern Afghanistan, said he had been forced to move away from the area to get an education for his children after their school was closed by the Taleban. Recently, however, he has been able to return because schools have been allowed to start operating again.

“The elders asked the Taleban to reopen the schools,” he said. “They agreed late last year that the schools should start working again. Our children are very happy – it’s as if they’ve been handed the happiness of the entire world.”

In recent years, teachers and even pupils have been killed by armed men, although it is rare for specific groups to claim responsibility.

Ali Khan, a teacher in the Tangi high school in the Sayed Abad district of Wardak province said he had fled his home for fear of being targeted. Now he has returned to his job.

“We don’t know why the Taleban have become so flexible,” he said. “I left my home because I was a teacher and I was scared. But now the Taleban are encouraging us to go into school and teach.”

The Taleban’s more flexible approach is not restricted to education. Insurgent groups used to obstruct and derail reconstruction projects in many parts of the country, but now they appear to be allowing certain projects to go ahead.

The governor of Kapisa province northeast of Kabul, Mohammad Sharif Hakimzadah, said the Taleban were no longer interfering in projects there.

Romal, who lives in the village of Mirakhel in Kapisa’s Tagab district, said the Taleban used to refuse to let NGO representatives operate in areas they held, and had killed workers and security guards working on such projects.

Over the past year, their approach had changed, he said.

“I’m one of the people working for an NGO and building bridges and wells. The Taleban move all around this area, but they don’t bother us,” he said.

Other Taleban restrictions included forcing men to grow their beards and banning people from listening to music, but attitudes to these things are changing as well.

Rohullah, from the Sayed Abad district of Wardak province, southwest of Kabul, said the Taleban no longer harassed men if they trimmed or shaved their beards.

“Look – I’ve cut my beard very short,” he said. “Some guys are completely clean-shaven, yet the Taleban leave us alone. They used to be against people listening to music, but now they act as if they’re deaf when they hear it.

Another welcome development, Rohullah said, was that the insurgents had stopped extorting money from locals as they used to do.

Wardak provincial governor Abdul Alim Fedai believes the insurgents are under pressure to make concessions, because of the combination of intensified NATO attacks against them and the creation of a High Peace Council to explore ways towards reconciliation.

“If the government and the coalition forces continue their current policies, many Taleban will undoubtedly split off from their commanders and leaders,” Fedai added.

Abdul Ghafur Liwal, who heads the Afghanistan Regional Studies Centre, believes the Taleban are making pragmatic choices so as to present themselves as a more viable alternative.

“If the Taleban want to prepare the ground for a better political future, they have to build up their authority and win popularity among the people,” he said. “That’s the reason they have started becoming more flexible.”

“The Taleban’s flexibility is deliberate,” he said. “They want to get people behind them to position themselves politically in future, should they come to power either through negotiations or through military action.”