Up to a quarter of the Tajik population are labour migrants, almost all men. Women back in Tajikistan are left to take care of their families. (Photo: Adil Nurmakov/Flickr) 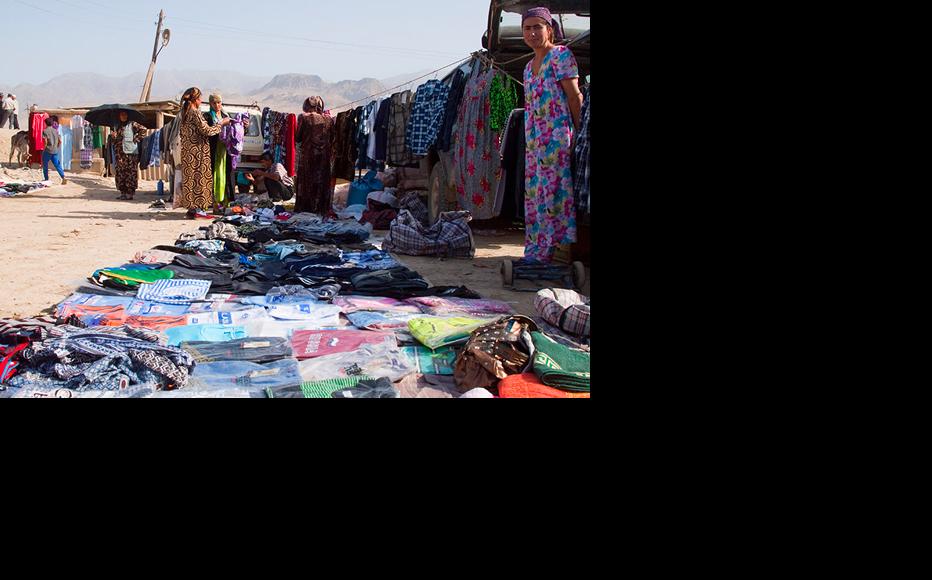 Women working at the market near Panjakent. (Photo: Evgeni Zotov/Flickr)
The link has been copied

Adolat’s story is a familiar one amongst many Tajik women. She has been on her own ever since her labour migrant husband took a new wife while in Russia.

The 40-year-old mother-of-three from the Bokhtar district of Khatlon region said her husband Muhamad had been working in Russia for many years, but used to visit often and send money home.

But the last time he came to Tajikistan was nine years ago, for his eldest daughter’s wedding. He brought his new “wife” to the event, and Adolat says that she hasn’t seen him since.

While in Russia, Muhamad had married another Tajik labour migrant in a religious wedding ceremony known as a nikoh. He then stopped sending any money home to his first family in Tajikistan.

Both their daughters are now married and their son is a teenager. With her parents dead and no brothers or sisters of her own, Adolat had to rely on the charity of her father-in-law, who guaranteed her a place to live.

But he recently died and Adolat’s future remains uncertain.

“I am afraid that his sons will reconsider his decision,” she told IWPR, weeping. “My husband is the eldest son of the family, but did not visit his parents for a long time. His brothers can turn nasty and take away the property [where I live now] because [Muhamad] has not been helping his parents.”

Adolat’s experience is not unusual in a country where vast swathes of the population leaves to find work abroad.

The number of Tajik labour migrants is estimated at between 800,000 to two million people, depending on the time of year. That amounts to almost a quarter of a population of 8.2 million, and most migrants are male.

Tajiks began working abroad in the early 2000s, mostly in Russia. Following the Russian economic crisis of 2015, there was a short-term drop in numbers, but many of the workers who temporarily went back to Tajikistan quickly returned.

Sharafmo Akobirova, 55, is a Tajik living in Magnitogorsk, an industrial city in Russia. She told IWPR in a telephone interview that many men, both single and married, form partnerships with Tajik and Russian women while working in Russia.

“There are many such cases,” she said. “If a man does not return home for a long time, you can be sure that he has a wife here. Many marry according to religious tradition [in a nikah ceremony], while others just live together with a new parter in what they call a civil marriage. It’s tolerated, society accepts this fact,” Akobirova said, adding that she personally did not approve.

Veteran activist Oinikhol Bobonazarova, who heads the Perspektiva Plus human rights NGO, called the state of Tajik women abandoned by their migrant husbands “a national tragedy”.

“Even during the second world war, women’s lives were not as hard as they are now,” Bobonazarova told IWPR.

The most recent large-scale study carried out by the Tajik State Agency on Social Protection, Employment and Migration, in partnership with local research centre Sozservis, was in 2009.

It found that 40.5 per cent of migrants divorced after leaving the country, and only 10.4 said that migration had no negative impact on their family.

A 2012 study of Tajik migrants by UN Women also found that up to 50 per cent of married men engage in extramarital affairs while abroad.

Tajik civil society groups have called for measures to tackle the problem of men living abroad who fail to support their families.

In 2013, politician Saodat Amirshoeva proposed a bill that would set up a database of emigrants, allowing maintenance payments to be tracked. But the same year, the government rejected the proposed law.

Mavdzhuda Azizova, a lawyer with the International Organisation for Migration in Tajikistan, noted that women were frequently left at the mercy of their in-laws if their husband decided to take another partner.

According to local tradition, parents choose their son’s wives. After marriage, a Tajik woman joins her husband’s extended family and relies on the protection of his relatives.

“It is often the case that Tajik families have several wives living in one building or even in one apartment. The house often belongs to the husband’s father. What do we have as a result? When a husband leaves his wife, she is simply turned out of home with no other option,” Azizova said.

In Tajikistan, bigamy and polygamy are criminal offences, punishable by fines of up to 80,000 somoni (10,000 US dollars) or a term of imprisonment up to five years. Bigamy was outlawed in 1999 and polygamy was banned in 2008.

Criminal cases have since been initiated against some 100 men, who mostly were made to pay a fine.

However, human rights defenders say that this number of prosecutions is insignificant compared to the real scale of the problem. Moreover, bigamists who live abroad can easily avoid the payment of fines.

In early 2017, the State Committee on Religious Affairs recommended that only senior imams at a few select mosques be allowed to perform the nikah ceremony. Again, this cannot be applied to Tajiks living abroad.

Dushanbe-based social affairs reporter Galim Fashutdinov said that the Tajik state should impose fines on labour migrants who fail to support their families.

Although Fashutdinov said that “one could understand those men, marrying while working abroad” he said that their responsibility for supporting wives and children at home had to be the priority.

“The authorities may use financial penalties. That’s the most effective method. If sons do not help their families, then the parents of these men should pay,” Fashutdinov suggested.

Azizova said that a pre-nuptial agreement, currently very rare in Tajikistan, could be a good means of protecting women’s rights.

“If there is a pre-nuptial agreement that outlines the rights of spouses and obliges a husband to provide for his wife and children with a property to live in, then men and their parents will become more concerned and care about their wives and daughters-in-law,” Azizova said.

In an absence of such an agreement, the most obvious way for a woman abandoned by a migrant husband is to seek work. However, this is not straightforward either, given the current state of the Tajik economy.

Fashutdinov said there were hardly any professional training courses aimed at women, meaning that many were forced to take menial, low-paid work to support their families.

That has been the experience of Nisso, now 35.

After divorcing her first husband in Tajikistan, she went to Moscow to find work and married another Tajik man. When Nisso got pregnant, her partner forced her to go back to Tajikistan and divorced her over the phone by saying the word “talok [I divorce you]” three times.

Back home, Nisso could only get find work as a cleaner.

“I clean the houses of rich people, clean carpets and toilets. I don’t turn down any work - I have to earn money to feed my children,” she told IWPR.

“We have a tough life. Now I live in my father’s house. We argue every day; my brothers want me and my children to leave. They don’t want to see us, even though I earn money [of my own],” Nisso said. “My son is my only hope. He will grow up and go to Russia to earn money. Maybe my life will improve then.”

Tajikistan
Women
Connect with us