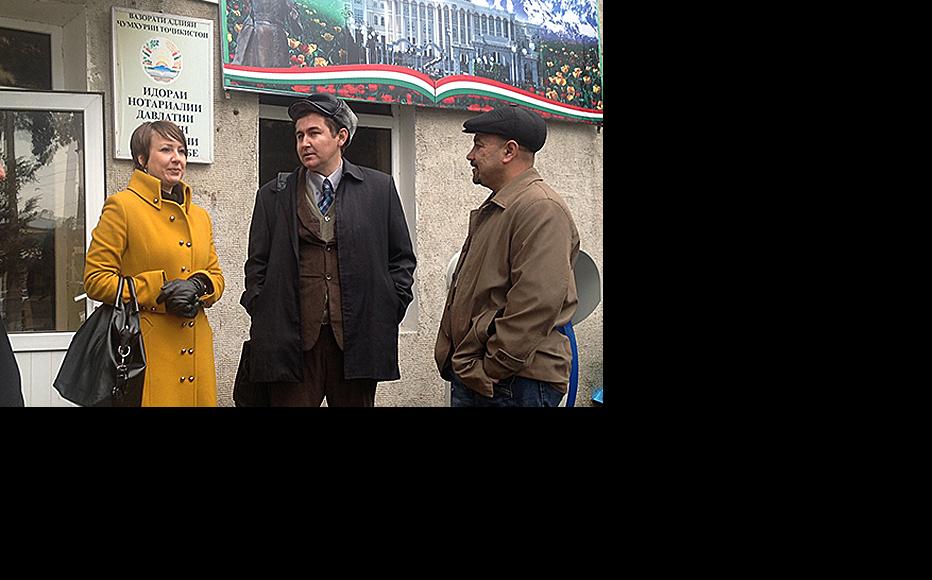 Journalist Olga Tutubalina outside the courtroom for a hearing at which she was convicted of libelling intellectuals in Tajikistan. (Photo: Nilufar Karimova)
The link has been copied

A case in which a well-known journalist in Tajikistan was found to have libelled intellectuals as a group has been described as “chilling” for freedom of speech.

On February 25, a court in the capital Dushanbe found against both Olga Tutubalina and the Asia-Plus news agency where she is an editor, in a libel case in which it was alleged that a blog entry she published last year caused collective “physical and mental suffering” to intellectuals as a class of people.

The three plaintiffs represented five institutions including the Union of Writers, the Academy of Sciences and the Union of Artists, Composers and Architects – all state-sponsored bodies.

The court imposed a fine of 30,000 somoni (6,200 US dollars) and instructed the defendants to publish an apology. The plaintiffs had been seeking 200,000 somoni.

Tutubalina posted the offending piece on the Asia-Plus website in June 2013. She alleged that the intelligentsia as a whole allowed the authorities to use it as a tool against the opposition.

Tutubalina cited the case of well-known poet Bozor Sobir, whose returned from a long exile in 2011 at the invitation of Tajik president Imomali Rahmon. Sobir was one of the founders of the democratic movement in Tajikistan in the early 1990s, but Tutubalina noted that following his homecoming, he called on his fellow-intellectuals to rally around Rahmon and questioned the need for a multi-party system.

She quoted a letter from Vladimir Lenin to writer Maxim Gorky in 1919 in which he condemned “the educated classes, the lackeys of capital who consider themselves the brains of the nation. In fact they are not its brains but its shit.”

The entry on Tutubalina’s popular blog, which often covers controversial issues like pressures on the political opposition or the plight of Tajik migrants in Russia, received more than 24,000 views and over 50 comments.

Mehmon Bakhti of the Union of Writers, who was among those behind the lawsuit but not a plaintiff, refused to comment on the verdict, apart from indicating that he and his colleagues intended to hand over the damage payments to children’s’ charities.

One of Tutubalina’s lawyers, Inoyat Inoyatov, told reporters that the verdict was groundless, and was the result of a politically-motivated case intended to silence a vocal critic. He said the defence team would be appealing against the decision.

The United States embassy issued a statement expressing concern over the verdict which it said would have “a chilling effect on freedom of the press in Tajikistan”.

The OSCE’s Representative on Freedom of the Media, Dunja Mijatović, also criticised the decision, particularly the idea that an ill-defined body of people can be collectively defamed.

“If those who can claim injury are not clearly defined, any disagreement of opinion could end up as a damage claim,” she said in a statement, urging the Tajik authorities to allow “public debate without triggering financial penalties”.

The Tajikistan Bureau for Human Rights and Rule of Law said the court’s findings violated constitutional provisions upholding the right to freedom of expression and banning state censorship.

“As a media professional, the journalist has right to express her personal view,” the group said in a statement.

Media activists say the case against Tutubalina could encourage more of the self-censorship that is already widespread among journalists in Tajikistan.

In its 2013 report on media freedom, the Paris-based Reporters Without Borders (RSF) ranked Tajikistan 115th out of 180 countries surveyed, describing the situation in the country as” difficult”. In its section on Tajikistan, RSF wrote that “the arbitrary blocking of independent news websites has become common”.

Although libel is treated only as a civil offence in Tajikistan after being decriminalised in 2012, insulting the president remains a criminal offence.

Nuriddin Karshiboev, head of the Independent Association of Mass Media, agreed that the pressure on Tutubalina was intended to intimidate other journalists.

He sees the verdict as a “blow to freedom of expression in our country” and a “political performance”.

He suggested that the fact she is not an ethnic Tajik might have caused particular offence to local intellectuals.

Karshiboev urged the media community in Tajikistan to stand up and be counted whenever journalists came under this kind of pressure.

“We need to unite and demonstrate solidarity among journalists against such initiatives,” he said.

Hilvatshoh Mahmud, director of the Ozodagon media group, told IWPR that the libel verdict signalled that the judiciary remained subject to government. He warned that the case might encourage state officials to sue journalists whenever the latter expressed opinions they did not like.

“The precedents for this exist,” he said.

Nilufar Karimova is an IWPR-trained journalist in Tajikistan.

Tajikistan
Media
Connect with us