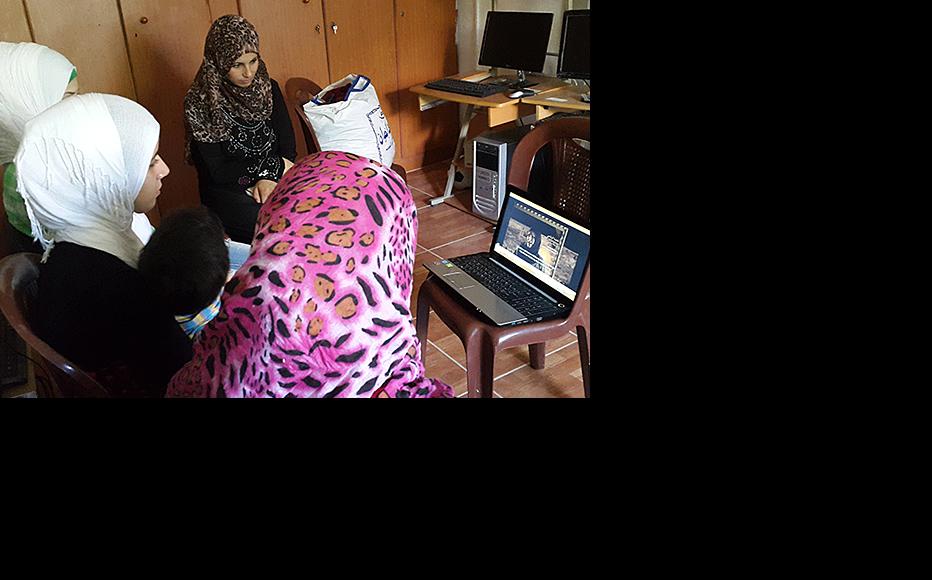 Young Syrian refugees in Lebanon watch a film on early marriage at a meeting hosted by a local NGO. (Photo: Omnia Al-Desoukie)
The link has been copied

This story was produced by Syria Stories (previously Damascus Bureau), IWPR’s news platform for Syrian journalists. The population of Ain al-Hilweh, a densely populated Palestinian refugee camp in Saida, a city in south Lebanon, has been swollen by the arrival of Syrian refugees. But conditions there have always been tough.

Residents only get three hours of electricity a day and the houses among the muddy roads and small alleys are overcrowded. A foul stench hangs over the cramped marketplace.

While there are army checkpoints at the entrance to the site, Ain al-Hilweh is a no-go zone for the Lebanese military. It is home to armed militias, fugitives and drug dealers, and heavily-armed men are a common sight.

Life in the camp holds multiple dangers. A 2013 study commissioned by Nabaa, a Lebanese organisation working on gender issues, found that many young residents were sexually abused.

Child marriage is common in rural and deprived areas of Lebanon. Now it is on the rise among Syrian refugees, of whom more than 1.1 million are officially registered in Lebanon.

For impoverished refugees, marrying off a daughter not only means one less mouth to feed, it can also bring a payment from the groom’s family. It can also offer the girl protection from the threat of sexual abuse by strangers.

“We Syrian girls know that we have to get married, I think at the end of the day, we will have to marry and be responsible for our family,” said Khadija, a refugee from the Damascus suburbs and at 17, the mother of a four-month-old boy. “No matter what, we’re going to get married, so why wait?”

Marriage at a young age can have far-reaching effects, including higher risks during pregnancy and childbirth and an increased likelihood of domestic violence. Many of the girls interviewed by IWPR said they had left school at the age of around 12. Women are frequently forbidden to work outside the home as this is seen as bringing shame on the family.

Rabab, 16, originally from the Damascus suburbs, said that when she asked her new father-in-law whether she could find a job, he said, ‘I’ll agree to you working when my sons and I are dead. Aren’t we men enough?”

Rabab now lives with her in-laws. She spends her days washing and cleaning, and has to plead with her husband, who is seven years older than her, for permission to visit her own family.

“If I could turn back time, I would prefer not to marry, I love my parents more than him. I wish I still lived at their place,” she said. “One time when I was out walking with my mum, a man showed me his genitals. I ran away. I never told my husband because he wouldn’t have sent me to my parents again.”

Ayat, originally from Aleppo, also regrets her choice. She was not keen on her suitor, but was convinced to accept him by her future mother-in-law.

“She told me, ‘Come and I’ll treat you like my own daughter, I will buy you clothes and make you happy,” she recalled.

She is now 16, and her husband is fighting in Syria after being conscripted into the government army. She is just as happy living with his mother.

“She is much better than him. It was a mistake to get married. He doesn’t want me to go back to school. He doesn’t allow me to wear a t-shirt,” added Ayat, who already wears a head scarf.

There are no official statistics on child marriage in Lebanon, in part because there is no universal minimum age for marriage. Each religious community is left to define the age of consent for its members.

The National Commission for Lebanese Women is drafting a bill that would make it a legal requirement to obtain permission from a civil as well as a religious court before a minor can get married. At the moment, the marriage of a child who has not yet reached the age of consent only needs religious approval.

“The law we are proposing aims to get permission not only from the girl's guardian but also from a civil court. If the religious authority performs such a marriage without agreement, he will be fined,” said Jomana Abu al-Ras, administrative manager at the commission.

The commission anticipates two major challenges – getting the legislation through Lebanon’s barely-functioning parliament, and dealing with the expected protest from the religious establishment.

Some campaigners think more needs to be done.

“If they are fining people after the marriage is performed, how do they save the girl?” asked Lama Najaa, a field researcher with Abaad, a gender equality resource centre.

In any case, the proposed law is unlikely to have an impact on refugee communities.

Oula, a Palestinian girl aged 14, is already a divorcee. Her father arranged her marriage with his cousin – her “predator” as she describes him.

“I was engaged for two years, and he was kind. But after we were married, his mother would tell him stuff against me. He would then come home and beat me severely,” Oula said, adding that she was often denied food.

On one occasion, her husband arrived home, locked the door and started beating Oula.

“I went into a frenzy, my back was torn apart, my hair was all over the place. My neighbours broke down the door and saved me. I never wanted to tell my parents, but after what happened I had no option,” she said. “My father cried; he blamed himself. I told him it was my fault too, as I used to think marriage meant a white dress and a party where the girls would dance for me.”

The marriage lasted just four months, and Oula now faces the stigma of being a divorcee.

“It restricts my movements, since people will talk about me,” she said.

Marriage at a young age is such an established custom that many of the girls interviewed by IWPR said they felt fortunate.

“We were lucky – our husbands are good men, and we just have to listen to what they want,” Khadija said. “I avoid arguing with him. After all, he’s just come back from work and he needs a break.”

The other girls nodded in agreement.

The names of interviewees have been changed at their request.

Omnia Al Desoukie is a journalist in Lebanon. She is on an Open Society Fellowship in collaboration with IWPR.