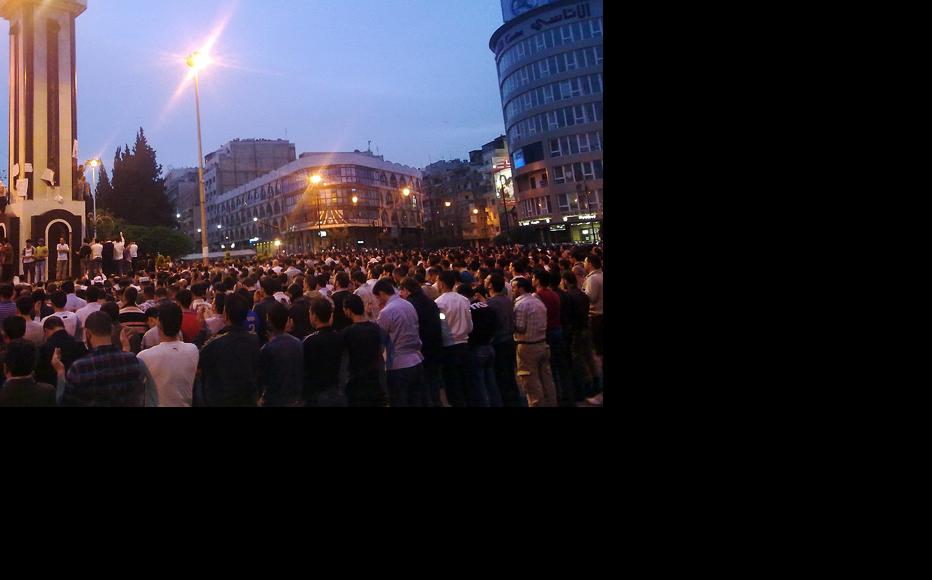 Syrian protesters in the city of Homs. (Photo: Syriana2011/Flickr)
The link has been copied

Enforcing a no-fly zone over Syria and a buffer area next to Turkey would result in unprecedented mass defections from the Syrian army and swiftly end the seven-month-old uprising, according to members of the Syrian opposition.

A senior member of the Syrian Free Army, SFA, the newly-formed organisation of soldiers who’ve defected to the opposition, said that tens of thousands of regime soldiers would be prepared to jump ship but are holding back because they fear they will be wiped out by government loyalists in the absence of protection from the international community.

“We are in contact with other divisions in the army and most want to join our ranks – but they fear mass slaughter and are waiting for the implementation of a no-fly zone and a buffer zone for safety,” said Benhal al-Aday, speaking from his base in Turkey.

According to the SFA, 12,000 soldiers have joined their ranks, with 18 brigades set up in various Syria cities.

They claim these rebel soldiers are actively engaging and ambushing security forces and the state’s shabiha (ghost) militia, but seldom confront other regular army soldiers for fear of alienating them.

Al-Aday , formerly a master sergeant in the Syrian army, and now a communications officer for the SFA, added that on desertion, the soldiers have to abandon their armoured vehicles and, carrying only light ammunition, hide in cities and suburbs. As the Syrian army was highly organised and well-armed, the only way to fight it was to adapt guerrilla-style tactics inside cities.

Most of their attacks have been on buses bringing in security reinforcements, often by planting bombs or carrying out hit-and run-attacks.

However, Deer Al-Zour, Al-Rastan and BouKamal saw street battles that raged for days with no particular side gaining the advantage. Recently, air support was called in against them in Hama, Homs, Al Rastan, Deer Al Zour and Deraa.

Meanwhile, the SFA continues to insist that the conflict is not a sectarian one.

“This is not a sectarian issue, but 90 per cent of the army is Sunni and they are trying to make it sectarian by going in and killing Syrian civilians in Sunni areas,” said the SFA source, noting that the minority Alawite faith group still controls the majority of the heavy weaponry at the disposal of the Syrian army.

“But there will be no reprisals, as we also have Alawites in our ranks who oppose the [Bashar] al-Assad regime,” he added.

The SFA’s senior leadership is based in Turkey and issues commands to the 18 rebel brigades, including the Kataeb Khaled bin Alwaleed in Homs and Kataeb al- Khashooshli and Kataeb Abu al-Fida in neighbouring cities.

The source, who defected this month and comes from Deraa, said that although they had suffered heavy losses the number of defectors was growing.

“What we try to do is halt the attacks on peaceful demonstrations, and [the regime] are losing – in Al-Rastan, we destroyed several tanks – but we don’t have bases and we stay with the people around the cities. Luckily, the Syrian terrain is helping us and works to our advantage in hiding,” he said, adding that the FSA was often wary of newcomers, fearing infiltration by the security services.

“We hope for international buffer zone, and a no-fly zone, as we need air cover to stop the spilling of civilian blood,” he concluded.

So far, the SFA say they have received no foreign assistance and depend on the weapons they’ve seized inside Syria.

However, according to Muslim Brotherhood spokesman Zuheir Salem, who is a member of the Syrian National Council, SNC – the newly formed body which aims to represent the revolution – negotiations are taking place in Ankara to try and secure foreign support.

“We are there in discussions with Turkish counterparts on many fronts, but the main work amidst all the challenges are to unite all the Syrian people and work internationally on gaining the protection of the international community with a buffer zone and a no-fly zone,” he said.

At the same time, a spokesperson for the Local Coordinating Committees, LCC, the main drivers of the protests on the ground, said that large-scale demonstrations were likely to diminish as the regime’s crackdown continued, with an 8 pm curfew now enforced over the majority of Syria.

“We went from 20-30 being killed on a Friday to that number being killed daily over the last two months and since Ramadan,” he said.

“The people are tired and feel they have made a point to the international community and it took them five months to wake up, now it is in the hand of the Syrian National Council to do the work, as they are the politicians and not us,” said the Hama-based activist, while adding that smaller, tactical demonstrations would still take place daily in several cities.

“We are in it to the end, even if it takes one year or three years,” he added. “There is no turning back now.”

The Arab Spring
Syria
Connect with us