Syria: A Man With No Fear

Syria: A Man With No Fear 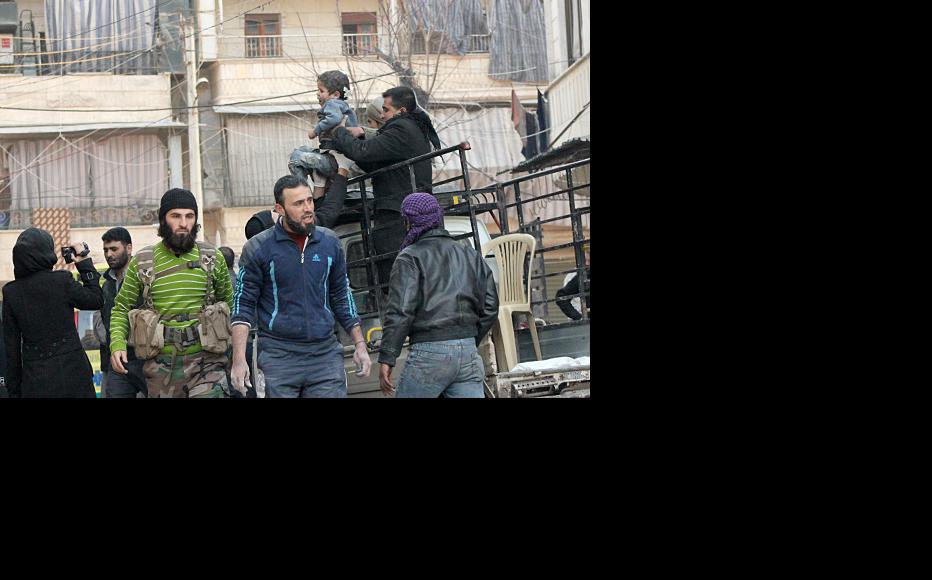 A female citizen journalist films a child being rescued from the ruins of a house in Aleppo. (Photo: Salah al-Ashqar)
The link has been copied

When I close my eyes and think about the Syrian revolution, many memories rush through my mind. I recall the blood and sacrifice, the fear mixed with anticipation, and the price Deir al-Zor paid in its quest for victory.

One day I remember in great detail is Monday, October 14, 2013. When I think of that day, my mind instinctively tries to block out the memories, but I struggle with myself – I want to recall everything that happened. I want to remember Bashar’s face the way it used to be.

Bashar is my 30-year-old brother-in-law. He is a macho, handsome young man who used to turn women’s heads. He is also a happy person, forever greeting people with a smile or a joke.

When he set foot in our house four years ago to ask for my elder sister’s hand in marriage, he became my brother and my father. He was a gift sent to us by God to fill in the void created by the death of my brother.

After the revolution started, Bashar immediately joined the opposition. Nothing intimidated him, not the detention cells at Political Security headquarters, and not the shabiha [pro-regime paramilitaries] who assaulted demonstrators.

He didn’t even allow the eye injury he sustained to deter him.

That day in October 2013 was the day the opposition planned to carry out a military operation against government forces, and Bashar was part of it.

I have never known Bashar to wait for anything with as much anticipation as he waited for that day. He was as excited as a child on his first day to school.

“Don’t worry, my love,” he told my sister. “God willing, we will come home victorious. We’re going to liberate the entire neighbourhood, I’m certain of it.”

My sister listened to his excited chatter and swallowed her pain. Trying her best not to affect his morale, she forced a smile and said, “I trust you and your comrades. May God protect you.”

She wished she could make time stand still, but it flew by. Sooner rather than later, it was time for the operation.

When my sister didn’t hear any loud explosions she felt a great sense of relief, as she thought the operation had been postponed. She thanked God and went to bed, hoping her husband would be back in the morning with news of what had happened.

At six in the morning, a loud explosion shook the house and shattered some of the windows. This was followed by the sound of gunshots and more explosions.

“My God!” she thought, “the operation was postponed only for an hour.”

She switched on the TV to check the news, but there was no information. She walked out into the street, but it was deserted – even the stray cats had disappeared.

The time passed by with my sister going back and forth between the TV and the deserted street, praying for her husband’s safety. She told herself it wouldn’t matter if he had lost limbs, she just wanted him back alive. She didn’t want their son to be orphaned.

There was a lull in the fighting, but Bashar didn’t come home. My sister decided to seek out some of his friends who worked as field paramedics. She hoped they might have some good news for her.

When she finally found one of Bashar’s friends, he reassured her, saying that the opposition had inflicted heavy losses on the government, and that her husband would be home soon.

“Bless you, may God grant you the peace you have just given me,” she said with a big smile on her face.

On her way back home, she ran into another friend who was on his way back from the battlefield.

“Congratulations on your victory!” she said. “Where is my husband? Weren’t you fighting together?”

“Yes, we were,” he said. “But what victory are you talking about? The operation failed. Go home and prepare a bed for your husband. He has suffered a minor injury.”

My sister was shocked and her state of euphoria evaporated.

Nevertheless, she had prayed for Bashar to survive, and he had, even if he was injured.

It took her great strength to remain composed and make up her husband’s bed. Ten minutes later, an ambulance pulled up in front of her house. A group of men carried in Bashar. He was unconscious and covered in a white sheet.

Wondering why he was half-naked, she realised she hadn’t given any thought to the kind of injuries he had sustained.

“Why is he unconscious?” she asked.

The men said they had put him under anaesthetic so as to stitch up his wounds.

She accepted this explanation and sat down at Bashar’s bedside.

Now and then, new visitors came by bringing more information about what had happened.

She discovered that Bashar had been shot repeatedly. Several bullets had entered and exited his thigh. A few others had caused less damage.

As she looked at her husband, my sister thought to herself, “How did this happen? And why?”

Suddenly, I saw the look of bafflement disappear from her face, replaced by one of determination.

For the next year and a half, my sister was steadfastly at her husband’s side while he received medical treatment in Turkey. She helped him regain both his strength and his good looks.

Bashar is no longer as handsome as he used to be, but he is just as strong and calm as he always was. Like a phoenix that rises from the ashes, he is ready to rejoin his fellow-fighters and fulfill both his dream and ours.

Ghazwa is the pseudonym of a Damascus Bureau contributor from Deir al-Zor, Syria.