Renewed violence is both undermining public confidence and disrupting investment.

Renewed violence is both undermining public confidence and disrupting investment. 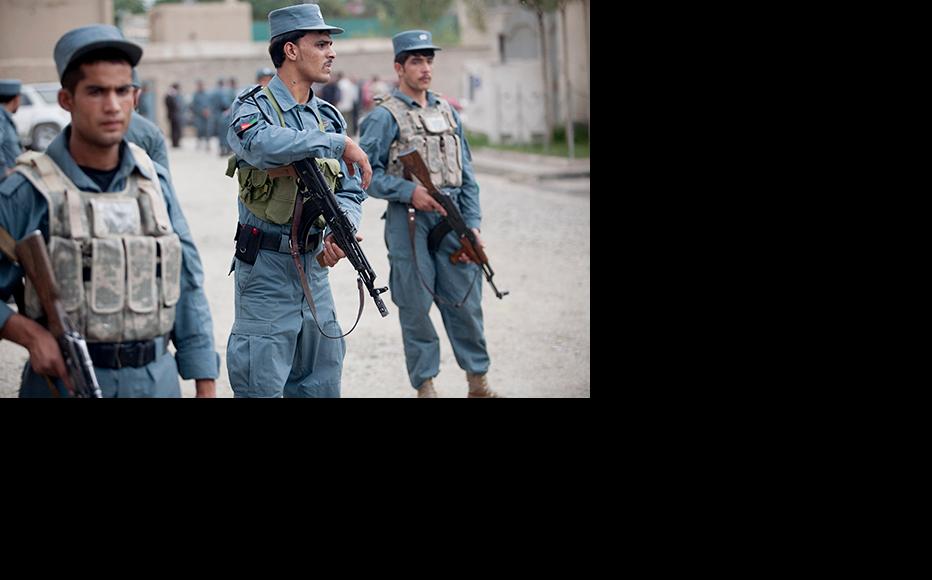 Police gather at the scene of an attack in Kabul. (Photo: Majid Saeedi/Getty Images)
The link has been copied

A recent wave of deadly insurgent strikes across Afghanistan is severely undermining business confidence in the country, experts have warned.

Militants struck at three locations in Kabul, including a well-known hotel used by business travellers, as well an international children’s charity in the southern city of Jalalabad.

Concerns over security have become so serious that increasing numbers of civilians in the capital are opting to work from home rather than risk travelling to their offices.

Kabul University professor Sayed Massoud told IWPR he believed that the recent bombings were part of a deliberate strategy to undermine public confidence and target the country’s economy.

“By attacking the Inter-Continental hotel the Taleban have further eroded public trust in our security forces as well as caused millions of dollars of damage to the economy,” he said.

Khan Jan Alokozai, deputy director of Afghanistan’s chamber of commerce and industry, added that the assault had forced the cancellation of several private sector business conferences due to be held at the Inter-Continental.

“The attackers managed to deliver a major blow to the investment field in Afghanistan in the wake of their attacks in Kabul,” he told IWPR.

The recent wave of violence began on January 20 when Taleban gunman gunmen stormed the Inter-Continental situated on the outskirts of Kabul.

Insurgents shot dead 21 civilians including 14 foreign nationals, as well as injuring 17 others. The attack, which lasted around 17 hours, also effectively grounded a national airline carrier as key staff were staying at the hotel.

Kam Air officals believe the gunman gunmen had prior intelligence on where its staff were staying and sought to target those rooms first. Nine airline personnel, including five pilots, died in the attack, which has left the company unable to operate dozens of flights.

Days after the Inter-Continental was hit, militants also stormed an office of the Save the Children aid agency in Nangarhar’s provincial capital, Jalalabad.

The complex assault began on January 24 when a car bomb was detonated outside the office. Gunmen then entered the compound, shooting dead four members of staff and wounding more than a dozen. Islamic State (IS) later claimed responsibility for the attack.

More than 105 people died and 210 were wounded in the next major attack on January 27 in Kabul, when a Taleban suicide bomber detonated an ambulance packed with explosives.

Two days later, militants attacked the country’s main military academy, in the west of the city, killing eight soldiers and wounding 13. This attack was also claimed by IS.

Massoud outlined what he believed to be the underlying strategy behind the multiple attacks.

He said the killing of civilians, the targeting of a hotel frequented by foreign businessmen and specifically pilots, all created a picture of chaos designed to destablisedestabilise Afghanistan’s economy and discourage potential investors.

He claimed the hotel attack served as a clear message to international travellers that Kabul was not safe, while the killing of Kam Air pilots crippled the carrier’s ability to import essential goods from India, a vital air corridor.

“Most of the Taleban's actions include attempting to stop flights and to undermine security on Afghanistan’s road networks,” Massoud said. “Insurgents are undermining the country’s ability to do business.”

He has argued that new networks must be put in place to recreate vital supply routes along the old Silk Road, of which the cities of Kabul, Herat and Kandahar once played a critical part.

Opening up international trade would not only enhance Afghanistan’s economic prosperity but also reduce the country's dependence on exports to Pakistan.

At a recent meeting in Delhi, Ghani again urged business leaders to focus their efforts on boosting trade, reminding his audience of Afghanistan’s historical significance as a major commercial hub.

He said, “We have been at the heart of networks: a roundabout, a place of meetings, civilisations, religions, cultures and, of course, armies and traders and pilgrims.”

Cargo flights currently operate from both Kabul and Kandahar to Delhi, Mumbai and Amritsar, carrying pharmaceuticals, cosmetics, fresh and dried fruits and herbs.

Since the air corridor opened in January last year, some 105 million dollars of Afghan products, including 1,800 tonnes of fruit, have been sold.

While government officials told IWPR that they remained optimistic about increasing the level of international trade, those business leaders directly affected by the recent attacks remain highly sceptical.

Farid Paikar, deputy chairman of Kam Air, said that he had major concerns surrounding the impact of continued instability in Kabul.

Five of the company’s aircraft – out of a total of ten – were out of service due to the deaths of the pilots at the Inter-Continental, and that this represented a huge blow to the effectiveness of the air-corridor.

Since October 2017, Kam Air has flown 100 tonnes of Afghan products to Delhi every week.

Worse still, he added, the firm may now struggle to repay loans taken out to finance the purchase of their aircraft. Safi Airways, once the second largest airline in Afghanistan, went bust in September 2016 due to non-payment of its debts.

Paikar told IWPR, “We haven’t yet paid most of the loans borrowed from domestic banks.”

Ahmad Harris Nayab, marketing manager at the Inter-Continental, said while the physical damage to the hotel could easily be rebuilt, restoring confidence in the hotel’s ability to protect its guests - especially foreign visitors – would be far harder.

The perception a secure stronghold in the middle of Kabul had perhaps been the hotel’s biggest asset, and that this was now destroyed.

“We have to regain and rebuild the trust placed in us,” Nayab said. “This will take time.”