Storm Over "Gender" Word in Armenia

Conservatives thunder at term they say could “promote homosexuality”.

Storm Over "Gender" Word in Armenia

Conservatives thunder at term they say could “promote homosexuality”. 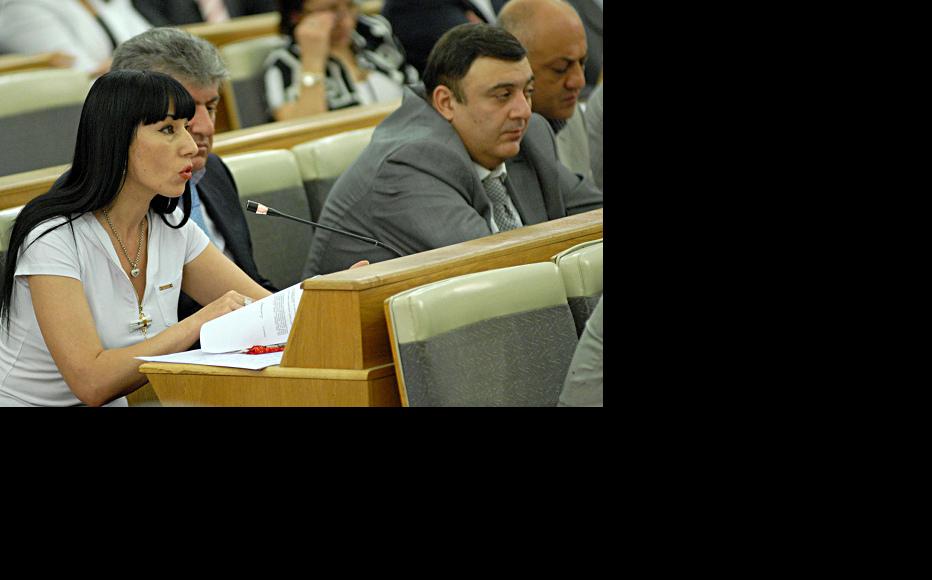 Naira Zohrabyan (left) of the Prosperous Armenia party is hoping to tone down an equality law to keep conservatives on board. (Photo: Photolure agency)
The link has been copied

Armenian politicians are to change the wording of a new law on gender equality after conservatives said it could be used to undermine traditional family values in its current form.

The law, which was passed in May with 108 members of parliament for and just one against, is designed to enforce sexual equality and create a modern legal framework for women, in particular.

“Until now, we’ve been ignoring half of Armenia’s potential – I mean the potential of women,” said Lara Aharonyan, head of the Women’s Resource Centre in Yerevan.

Traditionalists objected to the use of the term “gender” in the legislation, defined as the “acquired and socially fixed behaviour of persons of different sexes”.

The American academic John Money distinguished the concept of gender identity from an individual’s biological sex in the 1950s, and it has been gradually accepted in most Western countries.

Armenia is steadily bringing its laws into line with institutions like the Council of Europe and the European Union, both to abide by the terms of conventions it has already signed up to, and to win trade concessions from western states.

The new law is part of a broad series of measures intended to enforce sexual equality and outlaw discrimination in the country, but it has brought widely-held conservative values to the fore.

Groups like the Parents’ Committee argued that the legislation would give unwarranted benefits to sexual minorities in Armenia.

Social media campaigns also focused on this claim, including an online petition on the website www.change.org.

One of those who signed the petition, a man called Arsen Hayrapetyan, commented on the website that the use of the word “gender” undermined traditional moral values, and predicted that homosexuality would become more widespread and fewer children would be born.

“This will lead to a decline in our already weak demographic growth and – given the military problems our state faces – it could threaten our national security,” Hayrapetyan wrote.

According to Tigran Kocharyan, a blogger who has played a leading role in the wave of protests against the legislation, “the main aim of the law was to insert the term “gender” into the Armenian legal system.

“Soon we will adopt a law against discrimination, and a law about juvenile justice, and these three laws taken together are very dangerous,” he said. “We are moving towards… Europe, but at the same time we need to worry about preserving our national identity.”

Kocharyan was referring to a law against discrimination, drafted by national ombudsman Karen Andreasyan, which is still in its early stages and has not yet been submitted to parliament.

Mamikon Hovsepyan, the head of PINK Armenia, a group that campaigns for diversity and tolerance, said the new law had nothing to do with homosexuality.

“As for the LGBT [lesbian, gay, bisexual, and transgender] community, this law neither increases nor reduces their rights,” he added.

Other supporters of the law said traditional mind-sets in Armenia needed to change. Aharonyan, of the Women’s Resource Centre, said this would be a “laborious process”.

“It is a plus, however, that by passing this law, the state has taken this responsibility upon itself,” she added.

Aghassi Tadevosyan, an anthropologist from the Institute for Archaeology and Ethnology, said the fact that such issues were being discussed at all suggested Armenian society was changing in an open and healthy manner.

He said the fury which the wording of the legislation evoked was “a consequence of lack of knowledge of the subject, when the public is insufficiently informed about the problem under discussion”.

Filaret Berikyan, a deputy labour minister and one of the two authors of the law, insisted it was drafted well and that its critics were just ill-informed.

Nonetheless, he confirmed that legislators would seek to create a more satisfactory form of words when they gathered for parliament’s autumn session.

Naira Zohrabyan, a member of parliament from the Prosperous Armenia, said she had already proposed an amendment which would delete the reference to gender as a social construct.

“We will try to make this acceptable to the majority,” she said.

Anna Muradyan is a freelance journalist in Armenia.