Students and teachers say only those who can afford expensive private schools have chance of decent education.

Students and teachers say only those who can afford expensive private schools have chance of decent education. 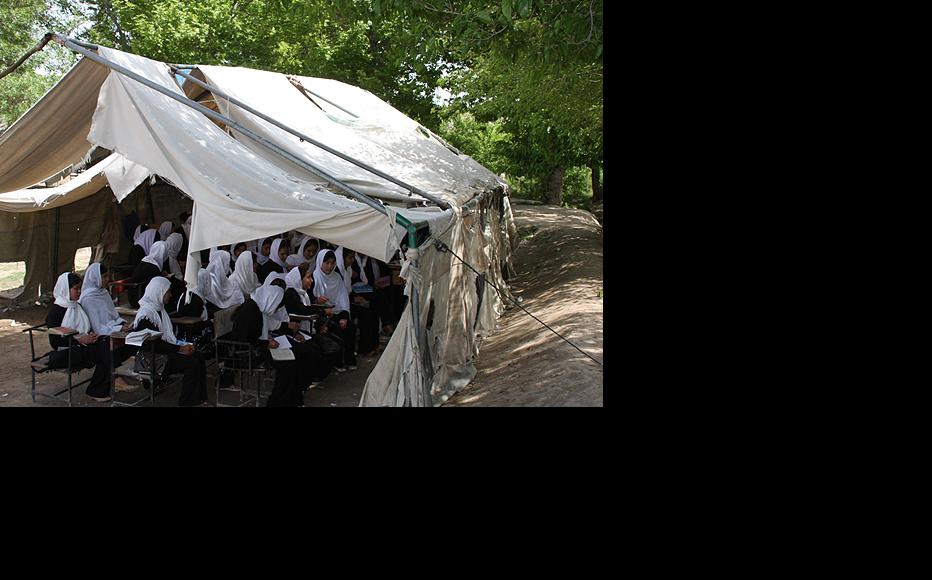 Girls study under canvas at a school in Balkh province. (Photo: Isaf media)
The link has been copied

Her black school uniform dusty from sitting directly on the bare earth, Zarmina swelters in the stifling tent which serves as a classroom at the Fatema-ye Balkhi school in Mazar-e Sharif.

It is not only the crowded, hot conditions that make it difficult for her to study.

“Mostly our teachers do not come to classes to teach us,” she said. “Students muck around and sometimes fight with each other; our teachers say that they would be crazy to come in this dusty, hot weather to teach us.

“They say, ‘We don’t get paid enough to teach you’. We cannot learn anything, because when we ask them questions they don’t want to answer.”

Students, parents and teachers alike are unhappy with the state schooling system in Balkh province, warning that a lack of resources and experienced, adequately paid teachers mean that levels of education are seriously low.

Some complain that in the rush to revamp the educational system following the fall of the Taleban nine years ago, an emphasis was put on quantity rather than quality when it comes to school provision.

Although there are 513 schools in Balkh province serving some 12,000 students, many lack classroom essentials such as tables and chairs. Some, like Zarmina’s school, are forced to hold classes under canvas, and teachers often have poor training as well as little motivation due to their low salaries.

Qais Maher Aian, a member of the steering committee of the Balkh provincial education department, noted that several schools lacked even basic facilities like toilets or a supply of drinking water.

“The current status of education is a tragedy and if some deliberate measures are not taken soon, then catastrophic illiteracy could threaten the coming generation,” he said.

Although the Afghanistan constitution means education is free from primary school through to university, many parents feel that they have to send their children to private school in order to ensure they gain an adequate tuition. For the lucky few who can afford the fees, the difference is clear.

Meetra, 13, was studying at the Mawlana Jalaluddin Balkhi state school until her father enrolled her in the Al-Falah private school which charges 500 US dollars a year. Now in the sixth grade, she said she was delighted with her new surroundings.

“Our previous school teachers were not able to enter classes without cursing the students, and did not teach us,” Meetra said. “Instead they handed over their teaching responsibilities to the top students to go through the lessons with us.”

While her previous teachers “always complained about their low wages, their house rent, lack of medical care and hunger” lessons at her new school begin at 7 am in clean classrooms with motivated teachers.

“My father is very happy about my performance because he sees a lot of changes in my knowledge, and my parents say the school deserves whatever money they receive,” she added.

Wali Mohammad Khan, Al-Falah's head teacher, told IWPR, “Whatever amount of money we receive from students as tuition fees, we spend a large proportion of it to provide educational facilities, employ experienced and educated teachers and to look after the students’ other needs. Our teaching system is also very advanced and practical, so many people want to enroll their children at our school.”

But Zahir Penhan, the head of Balkh provincial education department, denied that the quality of teaching at private schools was any better than state provision.

“On the contrary, state schools with their long background in teaching are better than private ones,” he said, adding that the reason that better-off people chose private education for their children was to lessen the risk of them being kidnapped. Private schools simply had better security measures.

Many disagree with his assessment, including some state school teachers who choose to send their own children to private schools.

Although Mohammad Karim spends his days teaching pupils at a Mazar-e Sharif state school, his own children go to Al-Falah.

“I send my children to a private school because public schools are getting worse and worse due to the shortage of experienced teachers, low salaries and poor teaching facilities,” Karim said. “Children can’t learn anything at the state schools.”

Naqibullah Khan, a teacher at the Mawlana Jalaluddin Balkhi school, said the problems were so severe that he was only going to stay on there until he could find better-paid work.

“To stand a month under hot tents full of dust and then at end the of a month just receive 100 US dollars - how is a teacher able to serve the children of our country?” he said.

Conditions at Mawlana Jalaluddin Balkhi are poor for both staff and students. More than 9,000 children are split into three shifts of two hours each between 8 am and 4 pm daily, and are taught in tents because of overcrowding.

“We have faced many problems as public schools have fewer resources but they have to keep up a high level of enrollment,” head teacher Haidar Khan said.

“We can’t even provide our students with space to sit,” he added, pointing to a tent. “Is this appropriate and right? To put children in this tent in 40 degrees centigrade in order to get through the curriculum?”

The situation has led to families having to choose which of their children they can afford to provide a proper education.

“I also hope to go private school because the teaching isn’t good here at our school,” she said sadly. “But my father can only afford to pay the tuition fees of my brother, so I have to go state school.”

Qayum Babak is an IWPR-trained reporter in Balkh.