"Never again" does not mean much when divisions remain so deep.

"Never again" does not mean much when divisions remain so deep. 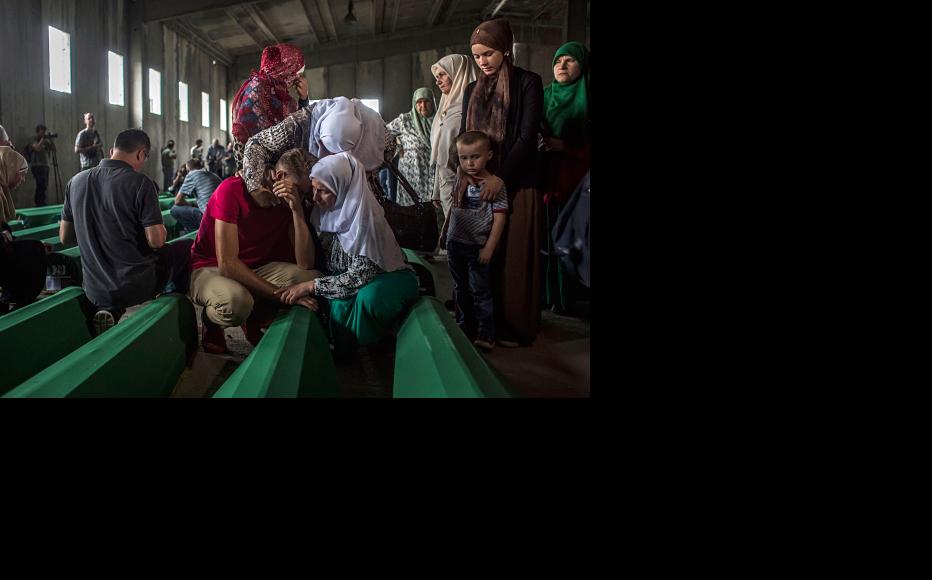 A family mourn over a coffin among 136 victims of the 1995 Srebrenica massacre in the hall at the Potocari cemetery and memorial near Srebrenica on July 9, 2015. (Photo: Matej Divizna/Getty Images)
The link has been copied

Landmark anniversaries commemorate loss and recall the historical past, lest we forget. This week, we join in marking the 20th anniversary of the Srebrenica massacre.

But since there are still those who contest the basic facts, and the core legacy of the war remains too entrenched, the date also serves to underline how much work remains to be done to achieve reconciliation in the region.

Srebrenica represented the nadir of the war in Bosnia and Herzegovina, and was the largest single mass killing in Europe since the Second World War. More than 8,000 Bosniak men and boys were separated from their families and systematically murdered by Bosnian Serb forces, or gunned down as they fled through the woods. And all this only a short distance from some of the continent’s most prized holiday shoreline.

That juxtaposition jarred at the time, and it still does. Even more jarring, however, was the fact that the massacre occurred not in the early days of the Bosnian war before the international community became engaged, but at its very close.

Unlike the scandalously sidelined humanitarian disaster which is Syria today, Bosnia was regularly on the front pages. The siege of Sarajevo featured nightly on the TV news. The endless rounds of unsuccessful Balkan diplomacy were at times covered hour by hour, as intensively as the current Greek financial meltdown. Over three excruciating years, an entire architecture of international response to conflict was forged, and the United Nations was deemed to be back in play at last, after the paralysis of the Cold War.

Yet after all that, in July 1995 the men of Srebrenica – huddled in what was supposed to be an internationally-guaranteed safe haven – were slaughtered in cold blood.

Even as sketchy and highly contested information emerged in the immediate aftermath, it was evident from testimony and satellite imaging that a major massacre had taken place directly under the nose of Dutch forces, the UN and the international community as a whole. It was that shock to the system that, building on a sequence of subsequent events – including a month later a second market massacre in Sarajevo and then the military engagement of NATO air forces – brought all parties, including the presidents of Bosnia, Croatia and Serbia, to the negotiating table in Dayton, Ohio, and the end of the war.

It was a highly compromised peace in a country disfigured beyond recognition, but the killing had stopped. Srebrenica’s “gift”, in some sense, was the end of the war.

Two other legacies from Srebrenica and the Balkan conflicts generally have also been positive.

Mobilised by the twin failures of international security institutions and the international powers to prevent genocide in both Bosnia and in Rwanda, the concepts and structures for pursuing international justice were strengthened significantly in the subsequent years, through the ad hoc tribunals for the Balkans and Rwanda and then the establishment of a permanent International Criminal Court. In a landmark ruling, Bosnian Serb general Radislav Krstic became the first person convicted of genocide at the International Criminal Tribunal for the Former Yugoslavia (ICTY). The three towering Serbian leaders of the Bosnian debacle – Slobodan Milosevic, Radovan Karadzic and Ratko Mladic – all ended up in the dock at The Hague. They too faced charges of crimes of war, including genocide at Srebrenica.

It is no longer exceptional that state presidents and national military leaders – as well as paramilitaries and non-state actors – should be subject to international law and potential prosecution for war crimes. This is by no means a small step, and perhaps the most positive legacy of Srebrenica as well as the Rwandan genocide. But it remains very difficult to gauge what difference this has made in reducing and resolving conflict, or indeed after many years of expensive, complex yet in some respects inconclusive prosecutions, how much support there remains for such processes around the world.

Also on the positive side, the importance of independent media and civil society in helping societies move beyond conflict is now broadly accepted. Funding for the area may be chaotic and insufficient, and a whole host of challenges and concerns remains. Nevertheless, and building on the important role of the struggling but vital independent media over the war years in Serbia, Croatia and Bosnia, the power of free media as a social force to challenge violent extremism, help build trust among communities through honest information, and contribute to transparent and accountable governance is irrefutable.

IWPR’s own work in more than 30 countries around the world grows directly from the Balkan experience. Over the past two decades, we have worked with thousands of journalists, editors and film-makers from all backgrounds, training them in human rights, objective reporting, the importance of the rule of law and processes of transitional justice.

For example, a series of films about Bosnians from all sides coming to terms with the past, was screened on television in the region as well as internationally via Al Jazeera. The films sparked intense debate, especially among younger generations of Bosnians who did not experience the conflict but still carried it around inside them.

IWPR has reported on the war crimes trials in The Hague since they began, and continues to do so, adding to an important historical record. The wealth of evidence gathered for the trials covering the former Yugoslavia has meant the Bosnian war is perhaps the best-documented in history, and this has played a huge part in ensuring justice for victims and survivors.

But this process has not convinced everyone that major atrocities even took place. The battle to establish historical truth continues, and much more work on reconciliation and inter-communal trust-building is needed.

What is most distressing, two decades after Srebrenica, is how little has changed in the Balkan states – societies are still deeply divided, there are substantial levels of denial of the genocide within the Bosnian Serb entity and in Serbia itself, and a continuing lack of dignity and justice for the victims.

This is highlighted by Russia’s decision this week, at Serbia’s request, to veto a United Nations Security Council resolution which would have described the atrocity as genocide.

Politicians on the ground still deny or diminish the acts committed 20 years ago – with Russian still providing the same unhelpful backing. Although Bosnian Serb president Milorad Dodik made a conciliatory visit to Srebrenica earlier this year and laid a wreath to the victims, he has consistently repudiated any suggestion that genocide took place there. Only last week, he said this was “a recurring lie”.

Peace has lasted since the 1995 Dayton Peace Agreement, in that there has been no resumption of ethnic conflict. But completely different accounts of history persist and, as IWPR and many close observers of the conflict feared then, Dayton ratified the separation of communities through ethnic cleansing. This has established a self-perpetuating structure for identity-based politics – the source of the original sin.

Despite the lack of an official border between Bosnia’s two entities – Republika Srpska and the Federation – they function as autonomous states with parallel judicial systems and governments, and often narratives, too. Authorities in both entities resist building memorials to victims who are not members of their own ethnic group.

If Bosnia’s Serb, Bosniak (Muslim) and Croat peoples live so separately, society will never heal and their respective leaderships will remain polarised and in conflict. (And the space for those of mixed background or those who do not wish to be ethnically affiliated will remain minuscule.) The passage of time and the efforts made by international organisations and civil society have failed to bridge this structural divide.

Closure cannot come until there is cultural and social recognition of the events of 20 years ago. Strength is needed to face the past, and justice has to go beyond legal redress.

In Bosnia, when people hear the words “Never again”, they shrug their shoulders and sigh. They see it as no more than a sound-bite – the world engaging in high-level diplomacy and grand words, while on the ground, society remains divided.

Anthony Borden is Executive Director of the Institute for War & Peace Reporting.