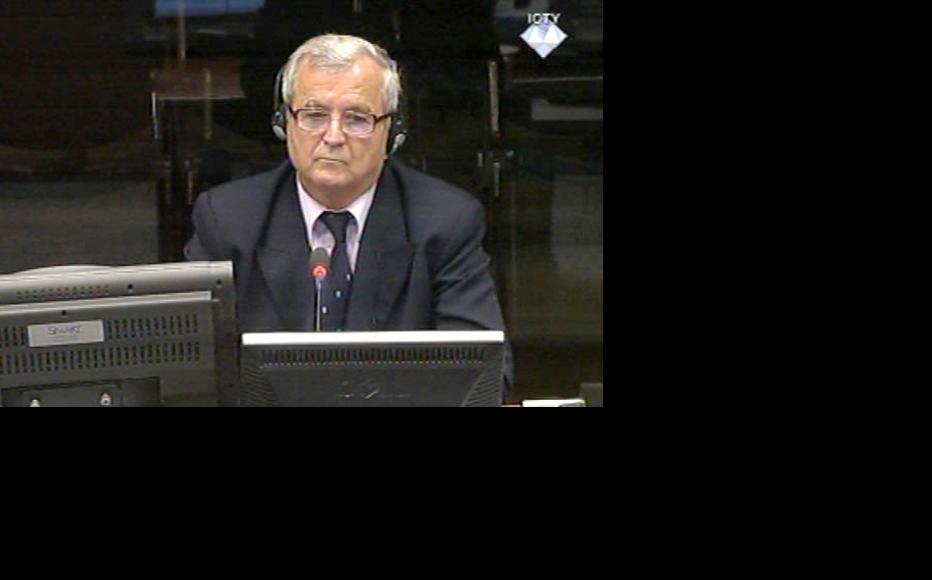 Milenko Todorovic, witness in the Mladic trial. (Photo: ICTY)
The link has been copied

A former colonel in the Bosnian Serb army told the Hague tribunal of ex-military chief Ratko Mladic this week how his unit made preparations to receive prisoners captured after the fall of Srebrenica in July 1995 – but they never arrived.

Milenko Todorovic previously testified for the prosecution in 2011 in the case against Bosnian Serb army officer Zdravko Tolimir, who was convicted of genocide and sentenced to life in prison in December 2012.

After giving evidence for the prosecution in the trial of his former commander Mladic this week, Todorovic then appeared as a defence witness in the trial of the former Bosnian Serb president, Radovan Karadzic.

The massacre of more than 7,000 Bosniak men and boys in Srebrenica in July 1995 is a central part of the indictment against Mladic.

The general is accused of responsibility for crimes of genocide, persecution, extermination, murder and forcible transfer, which “contributed to achieving the objective of the permanent removal of Bosnian Muslims and Bosnian Croats from Bosnian Serb-claimed territory”.

Todorovic said he served as assistant commander for security and intelligence affairs in the East Bosnia Corps of the Bosnian Serb army (VRS) in July 1995.

He had the additional task of providing communication between the corps command and the general staff of the VRS, which he said “usually happened by telegram or phone call”.

“One such telegram – I think it must have been a telegram – in July 1995 included an order from the general staff to the East Bosnia Corps to make space for some 1,000 or 1,200 in the military storage rooms in Batkovic [detention centre] for the prisoners who would be brought there,” the witness said.

Todorovic said the intention was to exchange these prisoners for VRS soldiers held by the Bosnian government army. The Batkovic facility was near the town of Bijeljina, where the East Bosnia Corp was headquartered at this time.

The order, “almost certainly was prepared by and came from Zdravko Tolimir”.

As corps commander for security and intelligence affairs, Tolimir was the witness’s immediate superior.

“Making space meant ensuring certain conditions, emptying the storage rooms, getting water and sanitation into those areas, and that is what we were about to do,” Todorovic said.

He said that after the storage houses were prepared but no prisoners except “a dozen or two” arrived, the East Bosnia Corps commander, Novica Simic, “got nervous and ordered [me] to ask what was happening and why the preparations for the exchange were not being continued as planned”.

In a phone call “some two or three days later”, Tolimir told the witness that the plan had been “abandoned” and was given no further explanation.

The witness said that “by chatting with the locals”, he found out that the prisoners who were supposed to come to Batkovic were actually “executed at Pilica”.

Todorovic added that this turn of events was “unfortunate also from the perspective of the families of the detained VRS members who were expecting their loved ones to return from detention in Bosniak prisoner camps, which was now impossible”.

He added that the “dozen or two” Bosniak prisoners who arrived at Batkovic were “indeed exchanged later on”.

At the outset of the cross-examination, Mladic’s defence lawyer Miodrag Stojanovic said he found it somewhat strange that an order as important as the preparation of a detention centre would come “through the intelligence line and not through the usual line of command”.

The witness agreed, adding that the order did not “bear Mladic’s name and he was not mentioned in any way, but the order certainly must have come from someone in the general staff.”

Todorovic did not say who that “someone” could have been.

“Tolimir, well – sometimes he acted in line with the legal framework and sometimes he acted perhaps a little outside of it. But in most cases, I can at least say that he knew what he was doing and that there was no outright illegal situation when it came to him,” the witness explained.

Todorovic told the chamber that the order was “per se definitely not illegal, as the most normal thing to do with prisoners would be to prepare housing for them”.

The Batkovic camp was “more or less operational throughout the war” but was not the site of any crimes or any “serious violations of human rights for the prisoners,” he said.