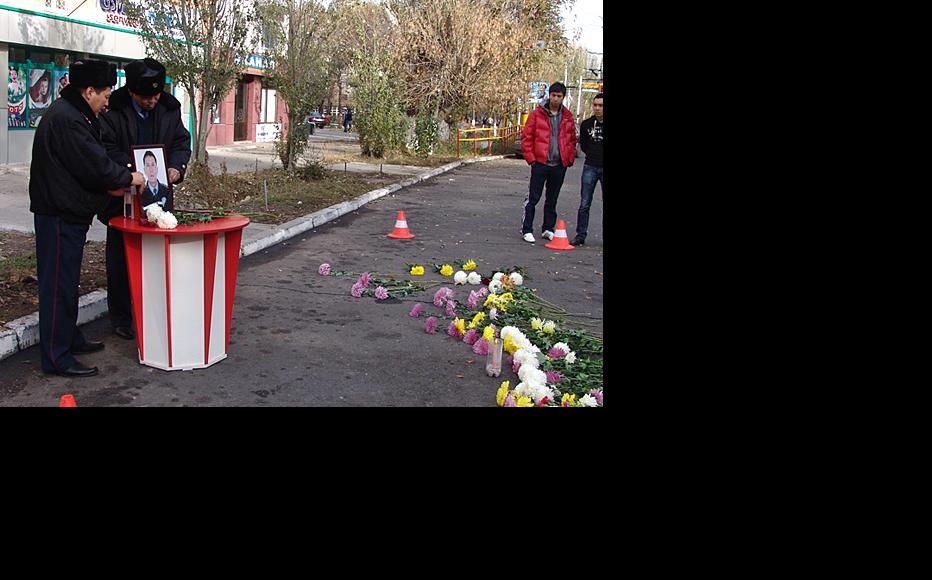 This is the spot where police captain Gaziz Baytasov, the last of seven people killed, died when the gunman blew himself up. (Photo: Larisa Taranova)
The link has been copied

Life in Taraz in southern Kazakstan is slowly getting back to normal after a suspected Islamic militant went on the rampage, killing seven people and finally himself.

The killer, who has been named as Maksut Kariev, robbed a gun shop in Taraz on November 12, taking two hunting rifles and shooting a security guard and a bystander, both of whom died.

He then killed two policemen, taking a pistol and a Kalashnikov automatic rifle from them, before going home and arming himself with a rocket-propelled grenade launcher. He used this weapon to attack the regional offices of the National Security Service, KNB, for Jambyl province, of which Taraz is the administrative centre. No one was hurt in this part of the attack, but Kariev wounded two mounted policemen who set off in pursuit.

When police eventually caught up with him, one officer was killed when Kariev detonated explosives, killing himself too.

Kariev killed a total of five people during this chain of events, and the authorities say he also murdered two KNB officers.

According to Viktoria Savelyeva, a reporter for the local newspaper Novy Region, this happened at the start of Kariev’s rampage. The two officers had him under surveillance because he was suspected of terrorist links. He killed them, took their guns, stole a taxi and drove to the weapons shop.

Savelyeva said some information was coming out about Kariev – he had moved to Taraz from Kokshetau in northern Kazakstan, was married with children, and had been a sniper in the army.

Officials are saying Kariev seems to have acted alone, although they will be unable to ascertain whether he had any accomplices until they complete their investigations. Some residents remain concerned that the trouble is not yet over.

Savelyeva said the mood in the city was now quiet but on edge.

“Today there was a funeral service to honour the policemen who died. The law-enforcement forces are on heightened alert,” she said, noting that many officers were out on police and the KNB building had been cordoned off.

“Local residents are fearful, but they are still going to the shops and parks, and there isn’t the panic there was on Saturday,” she said.

Jambyl region is close to Kyrgyzstan, and the security forces in that country are on alert. More Kyrgyz border guards are patrolling than usual in the Chui and Talas regions, and travellers who normally have to just show ID are being subjected to stricter checks.