Volunteers may have little themselves, but they still want to help others.

Volunteers may have little themselves, but they still want to help others. 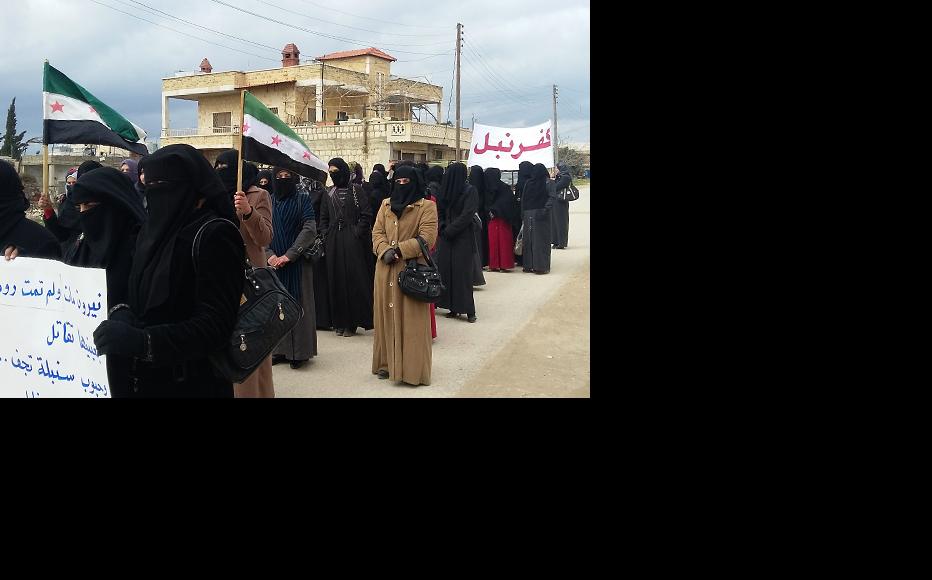 Solidarity rally condemning siege on Madaya and other Syrian areas. (Photo: Hadia al-Mansour)
The link has been copied

On January 7, 2016, Shaima donated her family’s entire daily food allowance to the Molham organisation towards aid for the besieged residents of Madaya.

“I came here as soon as I heard about the campaign the Molham team is organising for Madaya,” the 30 year-old told Damascus Bureau.

“My children and I can manage for one day, we won’t die of hunger. The people of Madaya on the other hand have resorted to eating grass and leaves to survive.”

She was among around 40 women who visited the Molham Volunteering Team offices in Kfar Nabel that day to donate to the campaign for Madaya, a town in Damascus’ countryside besieged by government forces for over six months.

Despite the difficulties in gaining access to the town, the team has successfully managed to deliver one aid consignment.

“We have our own special means of sending aid and donations to Madaya and other besieged areas, but we cannot reveal them as we don’t want the government to find out how we operate,” Abdalla al-Saloom, the head of Molham’s Kfar Nabel’s office, told Damascus Bureau.

The Molham Volunteering Team is named after a Syrian expatriate who lived in Saudi Arabia, but returned to his homeland to participate in the revolution.

Molham was martyred in 2012 while on his way to Latakia. His friends were so inspired by his actions that they decided to launch an organisation in his honour.

Sama Tayfur, its head of public relations, told Damascus Bureau that the team consisted of 80 volunteers living in different countries. The main office was in Jordan, with branches in Lebanon and Syria’s liberated areas. Molham has also acquired a license to operate as an aid organisation in Turkey.

Tayfur said that volunteers operating in different locations allowed the organisation to cooperate with international bodies on both fundraising and implementing campaigns on the ground.

Since its 2012 launch, the Molham organisation has conducted 11 different fundraising campaigns to assist refugee camps, field hospitals and besieged areas such as Zabadani, Homs and Al-Qusair. Special campaigns are also launched each year before Ramadan and ahead of the start of winter.

Aid delivered by the team has included food, medicine, clothes, blankets and heaters.

On January 20, 2016, a large demonstration condemning the siege on Madaya and expressing solidarity with its residents was organised by a group of women from Kfar Nabel.

Women from the neighbouring towns of Maarat al-Numan, Jbala, Ahsam and Maarat Hurma joined the rally, carrying banners bearing slogans such as “You cannot annihilate our people through starvation and siege”.

“Had it not been for this team, we would not have been able to send our donations to the people of Madaya, and help alleviate a little of their suffering,” one woman named Umm Abdo told Damascus Bureau.

The 37 year-old said that before learning of Molham’s work she would watch the suffering of besieged Syrians on TV and feel guilty for not being able to offer any assistance. She praised the team’s work, saying it helped the Syrian people support one another during these difficult times.

Another donor, Abu Omar, said that he trusted the team completely to get aid to where it was needed.

Despite having recently fled to Kfar Nabel from Maraat al-Numan and going through hard times himself, he had not hesitated to donate via Molham.

“The team has proven itself worthy of carrying out the responsibility of reaching those who are in desperate need,” the 42 year-old said.

“They are honest, decent young Syrians who took it upon themselves to serve the cause for no reward. Their work fills me with optimism and leads me to believe that the Syrian revolution will definitely triumph”.

Syria
Women
Connect with us