Customs service lacks the manpower, vehicles and helicopters it would need to stem the flow of consumer goods, arms and drugs.

Customs service lacks the manpower, vehicles and helicopters it would need to stem the flow of consumer goods, arms and drugs. 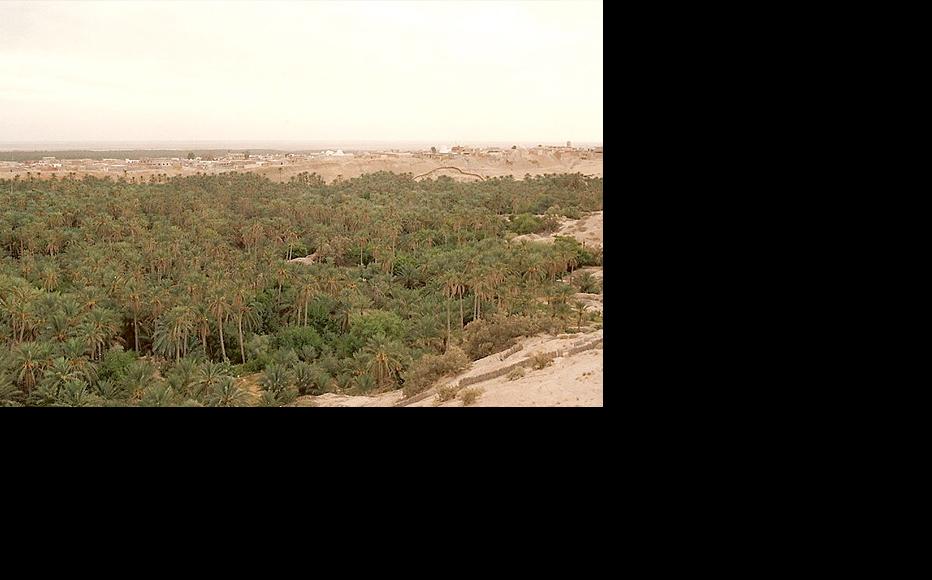 Nefta, an oasis town close to Tunisia&#039;s western border with Algeria. (Photo: Tico/Wikimedia Commons)
The link has been copied

“Smuggling is a family business that began a long time ago,” says Riyadh, who shuttles contraband goods from his home region in western Tunisia back and forth over the border with Algeria. “The tracks we use today are the same transit routes that were used in Roman times.”

Explaining why the illicit trade remained so prevalent, the smuggler, in his mid-thirties, said, “There are very few job opportunities, and only a few people from my region finish university. This is our only way of providing a sustainable life”.

Smuggled consumer goods, cigarettes and fuel flood local markets in Tunisia, while building materials and foodstuff like eggs, milk and vegetables are quietly taken out across borders. More ominously, narcotics and weapons come in just as domestically manufactured fertilisers, phosphate and ammonia – useful ingredients for explosives – slip out of the country.

According to Anouar Zarrouk, in charge of economic affairs in the Tunisian prime minister’s office, “There are no official figures on the scale of the illegal economy, but most estimates indicate that it amounts to about 40 per cent of the economy as a whole.”

Economist Adel Smaali says the volume of cash in circulation outside the banking system is estimated at 600 million dinars (400 million US dollars).

“Most of these funds are in the hands of smugglers, merchants associated with them, and money-lending companies,” Smaali said.

Another economist, Azzam Mahjoub, says about 30 per cent of working Tunisians are employed in the informal sector, so it is understandable that the state is sometimes reluctant to pry too deep.

Abdessalam, who sells household ornaments in the capital Tunis, is at the retail end of the illicit trade in consumer goods. Business is on the up, and he is supporting three families on the money he makes.

“I am the last link in a chain that begins in China,” he said.

Although a plentiful supply of smuggled goods should depress local prices, there is some evidence the overall result is inflation.

“Smuggling into the country prevents local industries flourishing, deprives the state of important revenues [and] hampers efforts to promote investment,” Mahjoub explained. “Smuggling out of Tunisia mostly involves foodstuffs and building materials. This outflow increases domestic demand, which leads directly to higher prices. It is the principal driver of the inflation which the Tunisian economy is suffering, and has a direct impact on consumer purchasing power.”

“Smugglers depend on a barter system. They import their goods and export other items, mostly government-subsidised goods like milk, flour and pasta. This creates a shortage on the market and prices increase”.

Algeria is a major source of imported marijuana, in particular. Tunisia’s interior ministry has reported that the authorities foiled 44 drug-trafficking operations along the Algerian border last year, compared with 92 in 2011. (See Drugs to Suit All Tastes in Tunisia on the illicit drug trade.)

In a political environment still volatile and unstable nearly three years after the uprising in Tunisia that led to the removal of President Zine El Abidine Ben Ali and his administration, the influx of small arms is a particular worry. When fighting escalated between the army and Islamic militants in the west of the country over the summer, the defence ministry said the munitions used to kill soldiers had come in from neighbouring countries, either Libya or Algeria. (IWPR reported on the fighting in Fighting Mountain Ghosts in Tunisia.)

As a veteran smuggler, Riyadh has a fair idea how arms are shipped, although he and his associates never deal in them themselves. It is, he says, a matter of ethnical principle.

“No one will agree to smuggle arms, especially when they see soldiers from their own country die,” he said.

After some questioning, Riyadh explained how it worked.

“Weapons are usually smuggled in convoys of trucks,” he said. “Five minutes before they cross the border, the smugglers who supervise these routes send men ahead in a car carrying normal contraband. This vehicle will serve as a guide on the dark road, and also as protection – if the border guards seize it, the trucks will be saved. This is a well-known method with valuable freight.”

Riyadh acknowledged that some “ordinary” smugglers were involved in securing routes for arms-traffickers, but said “they provide neither the vehicles nor the men for the job.”

“Most of what they do is guide those who want to smuggle in arms along the road, without taking responsibility for the consequences. It involves the payment of sums of money that increase in proportion to the dangers anticipated,” he said.

Riyadh calls his Isuzu D-Max pickup truck his “second wife”, and uses it on 100 kilometre runs between Tunisia and Algeria.

“I cross the borders between 11pm and 1am. No one else can drive along this road as it’s only wide enough for one car. My D-Max is fast and I drive without lights,” he said. “Sometimes I get someone to walk ahead and guide me. I am equipped with all the right accessories for the trip –binoculars, sophisticated communication devices and food.”

Riyadh says he feels completely unperturbed on these trips even though there are plenty of security forces on both sides of the border. It all depends on having a relationship with border guards. “Often, a commission paid in goods or money will make them close their eyes to what we’re doing,” he added.

“I’ve done a lot of petrol smuggling and I observed that the authorities were often lax. I would deliver consignment of foodstuffs and come back with petrol, sometimes in broad daylight,” he said. “It has become very easy since 2011. It no longer requires much caution.

POLICE VEHICLES THAT CAN’T KEEP UP

Protecting Tunisia’s borders is a challenge, with a 960 kilometre frontier with Algeria, 500 km with Libya plus a 1,300 km coastline that is also a gateway for contraband. Even at major ports and airports, smugglers find ways round the various checks.

“It’s hard to unravel the whole system that works under the mantle of the smuggling business. The chain consists of smugglers, transporters, the guides who scout things out in the field, their collaborators who keep the customs officers busy, and the merchants and others who invest their money in the informal market,” he said.

“There are 1,400 customs officers spread across Tunisia,” he continued. “That number isn’t enough to combat the challenge on the border, the human and logistical resource at the disposal of smugglers, and their ability to challenge every kind of restriction.”

Bechouel noted that smugglers had better, faster four-wheel drive vehicles which police cars were unable to chase down.

“The customs service lacks helicopters to carry out reconnaissance operations. If that was available, it would allow officers to cover long distances when pursuing smugglers,” he added.

Bechouel said new tactics were gradually being put in place, with some success.

“The establishment of what’s known as Checkpoint 44, overseeing the most important border crossing into Tunisia and secured by joint patrols of the army, customs and the security forces, has contributed to a reduction in the smuggling of agricultural products into Libya,” he said

In response to such measures, he said, the smugglers were upping their own game.

“For example, the customs administration has recently intensified its controls and checkpoints, but smugglers resort to force to go through the barriers, exploiting the general state of lawlessness. Or else they arrive at checkpoints in long convoys of trucks accompanied by SUVs carrying dozens of passengers paid to skirmish with officers to prevent them inspecting or seizing the trucks,” he said.

Hichem, a 40 year-old businessman from the city of Sfax, is a dealer in car and motorcycle spare parts, and admits to avoiding customs controls out of what he says is sheer necessity.

“Everyone who works in this area needs to know they can’t avoid illegal activity,” he said. “The merchant wants to gain, and customs restrictions in Tunisia leave no leave room for legitimate profit. So our philosophy of profit is based on combining both aspects – the legal and the illegal.”

“If my company imports five container-loads of merchandise and I pay taxes on all five, I won’t make a good profit. So I look for someone to help me, and I place them under his protection…. I pay taxes on one container and I import five,” he explained.

Hicham believes that this system is universal in seaports around the world – in his words, “essential to lubricating the machinery of commerce”. He predicts that it will continue in Tunisia “as long as we have a good relationship with the state, regardless of who is in power”.

Legal expert Maher Abbassi says Tunisian law is a lot softer on smugglers than it looks on paper.

“The legal system offers smugglers many opportunities for impunity. There are several legal get-outs, the most important of which is what’s called ‘reconciliation’ with the customs service, which protects them from custodial sentences,” he said, explaining that this kind of a deal resulted in a fine proportionate to the contraband seized, plus temporary confiscation of vehicles. This did not apply when the contraband included prohibited items, he added.

“The common perception that anti-smuggling legislation is severe comes from the severity with which the authorities deal with crimes that occur during smuggling,” Abbassi continued, noting also that “the authorities are stricter regarding cars that don’t have a license plate number than they are with trucks loaded with barrels of smuggled petrol. Hence, the severity is more procedural in nature.”

Ultimately, though, Abassi does not believe law and policing are the most effecting way of curbing the trade.

“The state cannot get a grip on smuggling because it’s unable to exert control over the vast border regions,” he said. “Control does not necessarily mean deterrence; instead, it should entail development of these regions. Current circumstances have turned smuggling into a way of earning a living and thus into a necessity, not a quick way of getting rich.”

Tunisia
Rule of Law
Connect with us