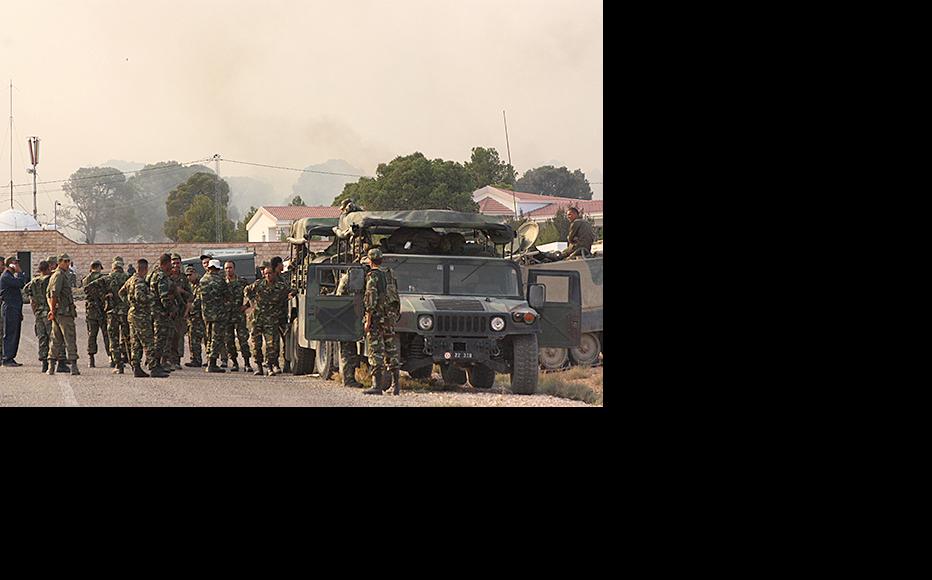 A Tunisian army unit involved in the fight against militants near Kasserine. (Photo: Ezer Mnasri) 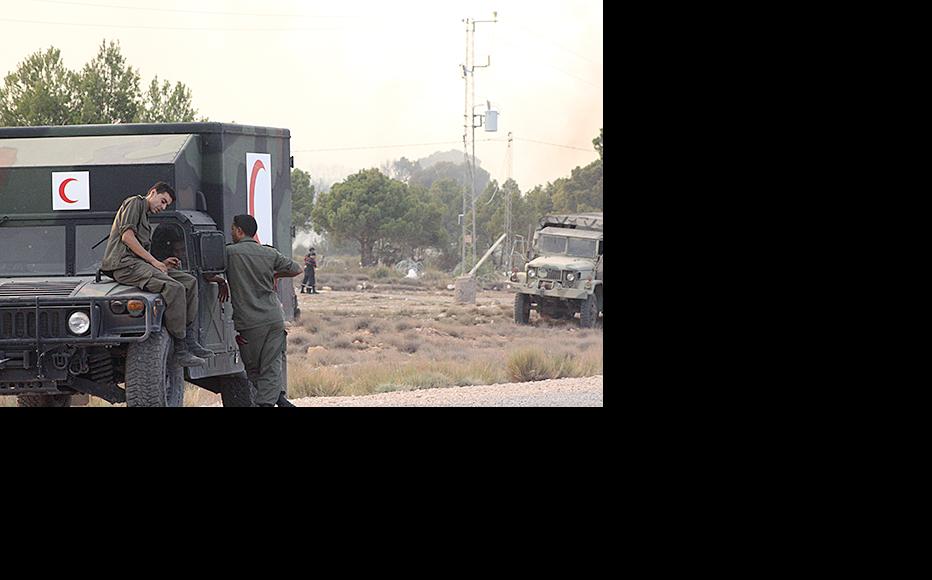 A field ambulance deployed near Kasserine. (Photo: Ezer Mnasri)
The link has been copied

At 1,540 metres, Mt. Shambi is Tunisia’s highest mountain. Early this year, it also gained the distinction of being the scene of the first attack on the Tunisian military in decades. That led to a major military operation to root out armed Islamic militants who, months later, are still believed to be hiding out on the mountain.

Kasserine, a city overlooked by Mt. Shambi in western Tunisia, was once a tourist hub because of the archaeological sites and scenes of natural beauty in the area. Its residents suddenly found themselves in a high-security zone subject to tight restrictions.

Military forces deployed at the entrance to the Mt. Shambi nature reserve have prevented visitors and journalists from entering the area, officially for their own safety and protection. Curiously, three other access points on routes to the Algerian border, Kef and Siliana are still more or less open. Military representatives, speaking off the record, say the dense forests make it hard to control these access points, so the army merely conducts out periodic patrols there.

“WE ARE FIGHTING GHOSTS”

Since April, the interior and defence ministries have been waging an operation to pursue militant groups hiding out on Mt. Shambi, but the campaign did not produce any arrests – not even the whereabouts of the militants – until gunmen staged a spectacular double attack on July 29. Eight soldiers were killed, their corpses mutilated and their equipment taken.

Hichem Khemiri was injured in a landmine blast that targeted his patrol on a mountain track that day. He had only recently been deployed in the area.

“Everything was normal, just like any other day, when there was an explosion,” he told IWPR in the hospital where he is being treated. “I don’t remember anything after that, apart from lying on a hospital bed.”

Describing his unit’s role in the operation, Khemiri said, “We patrol the area daily and we move around everywhere. We don’t encounter people or any other creature. We are fighting ghosts.”

These “ghosts” stepped up their activities after the July attacks, taking on the security forces in open firefights on more than one occasion. They planted landmines in areas beyond the mountain itself, even on roads leading to Kasserine.

Mohamed, a 60-year old farmer who lives a few kilometres from Mt. Shambi, described an encounter he had with four masked men on the road from the mountain to the city on the night of July 30.

“The masked men knocked on the door of my house looking for water,” Mohamed told IWPR. “I pretended to be fetching water and went to the home of a near neighbor to call the security forces. But they arrived too late.”

Some local residents like Thelija, a 50-year-old farmer, say they do not believe there are any militants in the area.

“Why do these terrorists only kill members of the security forces, yet don’t harm or approach civilians?” she asked. “I haven’t heard from a single eyewitness… that they have seen or met masked men or killed any.”

Many hotel owners, grocers and shopkeepers in Kasserine whose trade has been affected by the continuing military operation there share these suspicions. They say the only outsiders arriving in their normally peaceful city for the last several months have been security officers and media representatives.

Other residents whether the security forces are operating on effective intelligence. Some say they would like to be taken on as guides because they are more familiar with the mountain tracks.

POSSIBLE INSIDE HELP FOR MILITANTS

Ramzi, a member of the League for Protection of the Revolution in Kasserine, who asked for his full name to be withheld, believes that the militants may have been given advance warning of the army’s movements from certain “army members suspected of being part of the jihadist movement”.

“This would explain the laying of landmines when troops and other security forces came back to explore the mountain,” he said.

Defence expert Faysal Cherif agrees that this is a possibility.

Cherif ascribes the failure to deal with the militants over many months to “the weakness of military intelligence, plus the army’s lack of expertise in counter-terrorist warfare”.

“The fact that the terrorist groups have deployed in inaccessible mountain areas and area able to move around makes the task facing security and military forces more difficult,” he said. “Mt. Shambi is rugged and covers an area of some 100 square kilometres, with caves and caverns connecting it to the Algerian border, makes hunting terrorists a difficult task for troops who are not familiar with the area. It makes a suitable refuge for these groups to hide out and take up position, especially al-Qaeda in the Islamic Maghreb, which is drawn from several nationalities”.

Cherif says Tunisia’s political leaders are culpable insofar as they “ignored warnings from the security forces since May 2012 that there are training camps on the mountain”.

“In addition, they have ignored the takfiri phenomenon, the mobilisation of mosques, and the invitations to preachers known for their extremist ideology, allowing them to meet with young Tunisians and even letting them use public spaces for mass meetings without monitoring them,” he said.

The army has not given up, as pessimists suggest. Nearly two weeks after the eight soldiers were killed, and four months after the start of operations on Mt. Shambi, the defence ministry decided to bring in the counter-terrorism force, which has build up a solid reputation after successfully uncovering an armed group called the Suleiman Group in 2006. The ministry instructed the force to assist in and coordinate the capture of the militants.

Sources on the ground say, “The three agencies – the police, army and national guard – have broadened their intelligence-gathering, collecting information from local residents and linking up with operation rooms in the city, on the mountain and in the capital”.

The counter-terrorism unit scored a coup when it captured one militant when he came down the mountain to visit his family, who live nearby. According to a security source close to the investigative team, “Mohamed ben Mahmoud al-Amri is a student born in 1990. He was carrying a bag containing five hand grenades and a machine-gun. He was carrying a phone belonging to one of the eight dead soldiers which he used to film the murders.”

“The security forces resorted to beating him, which made him cave in within a short time and reveal important information including the fact that there were some 160 terrorists present on the mountain,” the source said.

The source said the foreign militants were Libyan, Moroccan, Algerian and Malian, with about 15 of each.

“Each group is led by an Algerian emir [leader] who gives the instructions and the plans they must carry out,” the source said, adding that two other emirs, Tunisians from Kasserine aged about 20, were arrested within a few days of al-Amri’s capture

Al-Amri’s interrogation revealed the location of a recently-established “recruitment centre” used to get young people to join the armed groups, and run by the two Tunisian emirs.

“This centre is in a district nearly a kilometre from the centre of the city [Kasserine] and a few kilometres from Mt. Shambi,” the source added.

In the first two weeks of August, the security forces carried out several sweeps of the neighbourhood, detaining about 100 young people suspected of involvement in terrorist activities. One of them was found in possession of “books on jihad, which he used to recruit young people, in addition to a sum of money in euros,” the source said.

The same source said that the young people picked up in the raids were members of dormant cells linked to the jihadist fighters in the mountains.

“Their mission was to provide food and medicine via two girls, one a nurse at the regional military hospital and the other the wife of one of the young jihadists,” the source said. “The group had started changing its tactics, assigning of one of these girls to carry out bombings in Kasserine and neighbouring towns to create a diversion for the security forces, which had started hemming the terrorists in on the mountain.”

The source said the militants had “links to Abu Ayadh, leader of the jihadi Salafist movement known as Ansar al-Sharia, which includes a number of elements from the al-Qaeda-linked Suleiman Group which has designs to create an Islamic caliphate”.

The Tunisian interior ministry has confirmed that security operations on Mt. Shambi carried out in conjunction with the defence ministry are ongoing.

“I cannot reveal any information that might be useful for our opponents, despite the public's thirst for explanations and clarity,” official ministry spokesman. Mohamed Ali Aroui told IWPR.

The mountain remains closed to local residents, who used to cut wood and hunt there. They complain that the local authorities have blocked the road into the mountain and nature reserve without permission either from the defence ministry or the forestry department.

On the road back to Tunis, not far from the mountain, our car was allowed past a police patrol without being stopped. So was another vehicle with no license plates, and carrying tanks of what seemed to be petrol.

Sihem Ammar is a staff reporter with IWPR Tunisia.

This article first appeared in Arabic at HakaekOnLine

Tunisia
Conflict
Connect with us