As Kosovo leaders suggest wartime commander’s acquittal absolves their side from guilt, Serbian politicians say it will make reconciliation that much harder.

As Kosovo leaders suggest wartime commander’s acquittal absolves their side from guilt, Serbian politicians say it will make reconciliation that much harder. 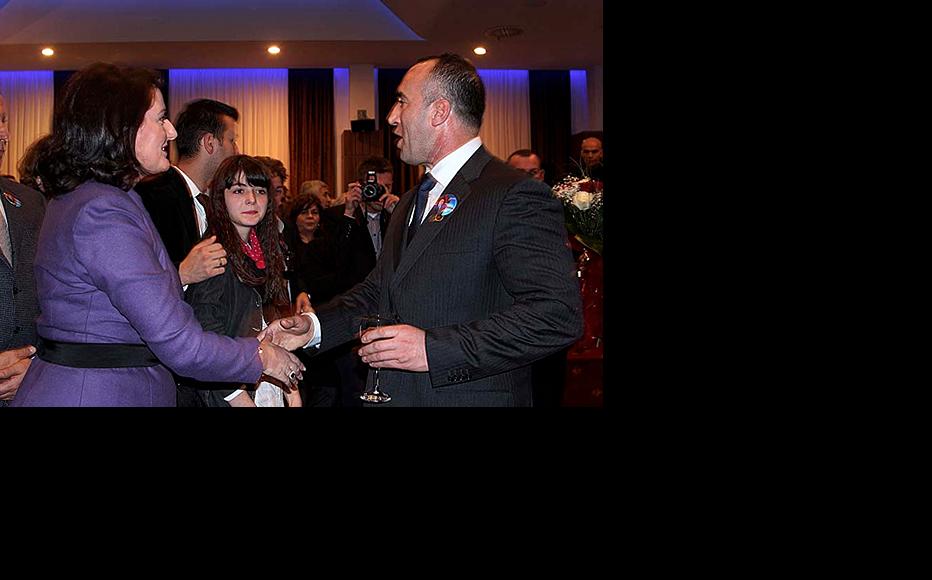 Kosovo president Atifete Jahjaga greets Ramush Haradinaj on his return from The Hague. (Photo: Kosovo president's official website.)
The link has been copied

While the acquittal of former Kosovo prime minister Ramush Haradinaj has been celebrated in Kosovo, it has met with anger and disappointment in Serbia.

Serbian politicians said the Hague tribunal’s November 29 decision, only two weeks after the acquittal of Croatian generals Ante Gotovina and Mladen Markac indicted for crimes committed against Serbs, was a serious setback for the process of reconciliation in the region. (See Croatian Joy, Serbian Anger at Gotovina Acquittal.)

“If somebody wanted to turn us against one another, they have found the right way,” Serbian president Tomislav Nikolic said shortly after judges announced their verdict in the case against former Kosovo Liberation Army, KLA, commander Haradinaj and two associates, Idriz Balaj and Lahi Brahimaj.

Rasim Ljajic, who heads the Serbian body responsible for engaging with the Hague tribunal, said that as a result of the verdict, “We have never been further from reconciliation or from facing the past.”

The Hague ruling came after a lengthy retrial that was ordered by appeals judges after Haradinaj and Balaj were acquitted in a trial that ended in 2008. Brahimaj was found guilty of cruel treatment and torture in that original trial.

The charges included the murder and torture of Serb, Albanian and Roma civilians during the late 1990s conflict between Serbian security forces and the KLA in Kosovo. (See Haradinaj Retrial Ends in Acquittal.)

Flying into Pristina only hours after the verdict was read out, Haradinaj was accorded a high-level welcome. Kosovo’s prime minister Hashim Thaci, deputy prime minister Behxhet Pacolli and justice minister Hajredin Kuci were all waiting at the airport to greet him.

“I am happy that the [Hague tribunal] has confirmed that our fight for freedom was a just one,” Haradinaj told journalists gathered at the airport, referring to the KLA’s war with Serbian forces in 1998-99 which led to separation and ultimately international recognition for an independent Kosovo. “This will help us face future challenges.”

In a press release issued the same day, Kosovo’s president Atifete Jahjaga said the three men’s acquittal “was yet more proof that our war was just and that our [military] leaders are not guilty of the crimes they were charged with”. Prime Minister Thaci issued a similar statement.

Not everyone in Kosovo shared these sentiments.

“This is a tremendous blow to our families,” said Natasa Scepanovic, an ethnic Serb who lost her parents when the town of Istok was in KLA hands in the late Nineties.

Her father’s remains were identified in 2003, while her mother’s fate is still unknown. Scepanovic now heads an association of relatives of abducted and missing persons in Kosovo.

“We feel desperate and humiliated. This ruling means not only that [Serb] victims are worthless, but also that they never existed. Our wounds are being reopened,” she said.

Across the region, there was some consensus on the verdict’s likely impact on progress towards reconciliation and justice.

Serbia’s state prosecutor for war crimes, Vladimir Vukcevic, said “someone is guilty for the deaths of all those people in Kosovo, and they have to be dealt with”, adding that this aim could not be achieved unless there was cooperation in the region.

“Without [that] cooperation, there will never be reconciliation or justice for victims,” he said.

Others said it was for national leaderships in the Balkan states to work towards reconciliation themselves.

“The Hague rulings themselves are not the cause of the problems; they are being used as an alibi by political elites in all of the countries in the region to further weaken the reconciliation process, because they’ve never worked sincerely on reconciliation in the first place,” he said.

Behljaj Becaj, a professor in Pristina, agreed, saying, “The leaders of the countries in the region have done almost nothing to lay the ground for ordinary citizens to reconcile and leave behind events of the past. These recent rulings by the Hague tribunal only prove that this is a problem that won’t easily be overcome.”

Borka Pavicevic, director of the Centre for Cultural Decontamination in Belgrade, said she believed the negative impact of the Hague rulings on Haradinaj, Gotovina and their associates could be short-lived, although much depended on how the authorities in Serbia acted in the days and months to come.

“Are they [Serbian leaders] going to be more open towards other countries in the region, or not? Will they do anything to help those who lost everything in the wars of the Nineties? Will they help those who have returned to their prewar homes, and make their lives easier?” she asked. “Or will they just sit in the middle of Belgrade and shout about the injustices done to Serbia?”

Amra Zejneli reports for RFE and IWPR in Pristina. Branka Mihajlovic and Milos Teodorovic are RFE and IWPR reporters in Belgrade.