Warnings that verdict could harm relations between two states, though some say little reconciliation has taken place anyway.

Warnings that verdict could harm relations between two states, though some say little reconciliation has taken place anyway. 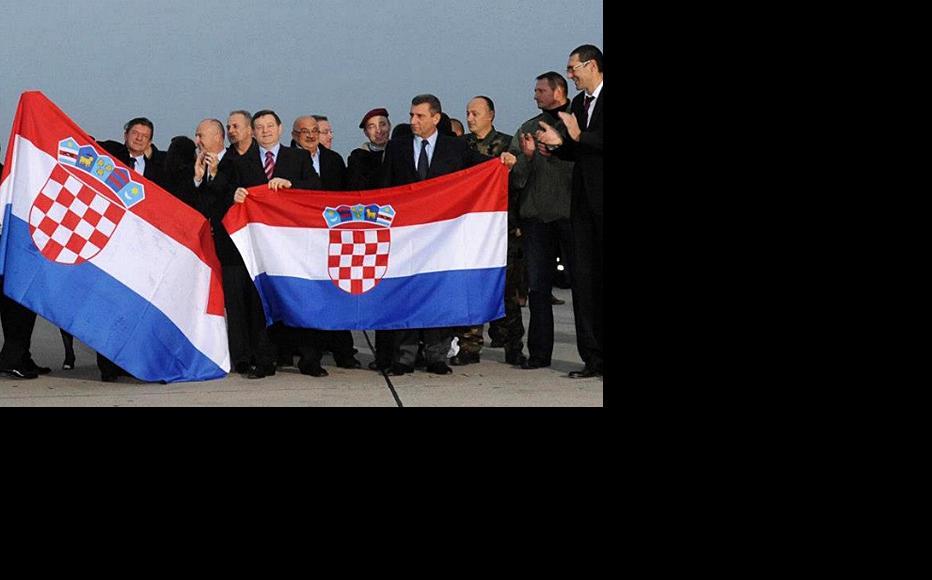 Celebrations in Zagreb The Croatian flag on the right is held by Markac and Gotovina. On the right-hand side of the picture is Croatia’s defence minister Ante Kotromanovic. (Photo: Government of Croatia) 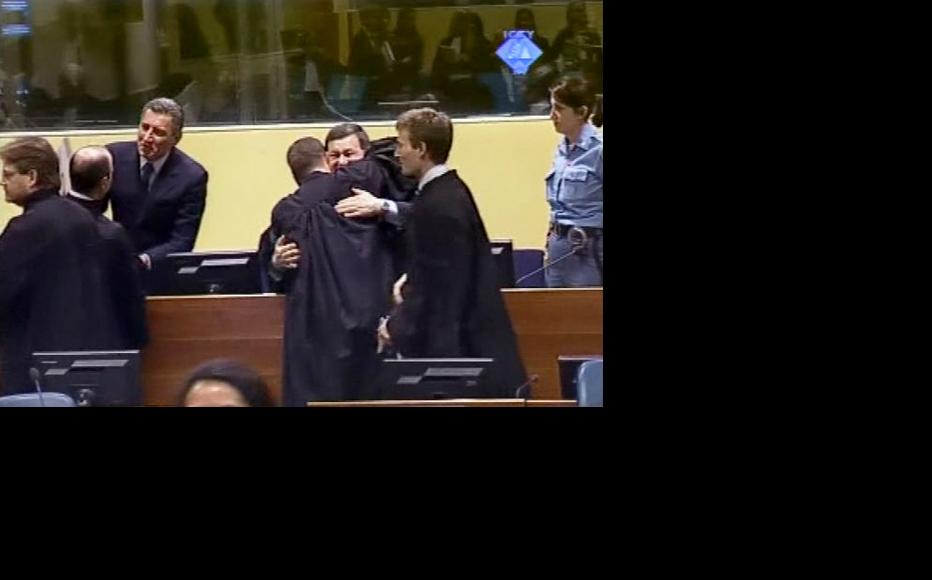 Ante Gotovina and Mladen Markac after the verdict acquitting them was read out at the Hague tribunal. (Photo: ICTY)
The link has been copied

The euphoric mood that swept Croatia when appeals judges in The Hague acquitted generals Ante Gotovina and Mladen Markac of all charges was matched by the broad sense of outrage in Serbia, where one senior official said the verdict served neither justice nor reconciliation.

Thousands of people across Croatia watched a live broadcast from the Hague tribunal on screens placed in public squares, and the crowds erupted in cheering when the judges announced their verdict on the morning of November 16. Public celebrations were swiftly arranged in the capital Zagreb, and in Zadar, Osijek, Dubrovnik and many other towns and cities.

In April 2011, Gotovina and Markac were convicted of a range of crimes relating to their time as military and police commanders, respectively, in the 1995 Operation Storm, in which Croatian forces regained control of Serb-held parts of the country. (See Croatian General Acquitted on Appeal.)

Gotovina was sentenced to 24 years in jail for ordering unlawful and indiscriminate attacks on Serb civilians; the deportation of at least 20,000 Serbs; the murder, persecution and cruel treatment of Serb civilians; and counts of plunder and wanton destruction. Special police commander Markac was convicted of eight of the nine counts in the joint indictment, and sentenced to 18 years.

“We are relieved,” Croatian prime minister Zoran Milanovic told local media shortly after the appeals verdict overturning all the charges was announced. “Our war was a just one, but some mistakes were made during that war. However, it was the Croatian state, not Gotovina and Markac, that was responsible for those mistakes.”

In a brief statement, Croatian president Ivo Josipovic said the judgement “confirmed that Croatia did not commit ethnic cleansing… and that the Croatian leadership and armed forces did not act as a joint criminal enterprise whose goal was the persecution of civilians, our Serb compatriots.”

The day the generals were acquitted and freed, the Croatian government dispatched a special plane to The Hague to bring them home. On arrival at Zagreb’s airport, they got a red-carpet treatment from Prime Minister Milanovic and parliamentary speaker Josip Leko, while tens of thousands of people gathered in the city centre to welcome them back.

“We won. This is the end – the war belongs in the past, let’s turn towards the future together,” Gotovina told cheering crowds in Zagreb’s main square.

Like the prime minister, President Josipovic emphasised that the Croatian state still had a responsibility to prosecute all those responsible for crimes committed by Croatian forces during Operation Storm.

The Zagreb-based Documenta Centre for Facing the Past issued a statement, also on November 16, complaining that local courts were too slow in processing war crimes cases relating to the 1995 offensive.

"The Croatian judiciary needs to assume full responsibility for processing these crimes, and the government must secure reparations for civilian victims [of Operation Storm]," the statement said.

Commenting on the verdict, a representative of the Serb minority in Croatia, Milorad Pupovac, said the acquittal was “good news for the generals and for all those who believed in their innocence”. But, he added, “the question is who is responsible for the killing of civilians, the destruction of property, and the consequences of persecution?”

In Serbia, news of the acquittals prompted disbelief and outrage. President Tomislav Nikolic said it was clearly a “political, not legal decision”, while the state prosecutor for war crimes, Vladimir Vukcevic, called the acquittal “scandalous”.

Prime Minister Ivica Dacic said the decision would have grave consequences for the process of reconciliation in the region.

“How can we [the Serbs] be asked to condemn all war crimes, while others are not doing the same?” Dacic said. “This is certainly going to influence our attitude toward the Hague tribunal.”

Deputy prime minister Rasim Ljajic, who heads the Serbian body responsible for engaging with the Hague tribunal, elaborated on the possible impact of the decision, saying, “It doesn’t mean cooperation with the court will end, but it will be scaled down to a technical level.”

“Our government is appalled by the verdict,” Ljajic said. “Instead of delivering justice, it has only hurt victims and their families. This verdict is a slap in the face to international justice and to the reconciliation process.”

Many analysts in the region expressed concern that the ruling could undermine relations between Serbia and Croatia, and set back progress towards reconciliation in the region.

However, Jadranka Slokovic Glumac, a Croatian lawyer who has worked at the Hague tribunal, said that in reality, there was very little the court could do to assist the reconciliation process.

“Everyone is reacting to this verdict in their own way and looking at it from their own point of view. The Hague tribunal’s role is to determine the responsibility of individuals for war crimes, but it can’t do anything about relations among countries in the region,” she said.

Sonja Biserko, the director of the Helsinki Committee in Serbia, argued that true reconciliation between the two countries had never really got started.

“I think these initial reactions are very emotional, and won’t count in the long term,” she said. “Since there isn’t even minimal consensus on what happened in the early Nineties, on who started the war, or on the nature of that war, we cannot really talk about reconciliation. There is no foundation for it.”

Enis Zebic is an RFE and IWPR reporter in Zagreb. Ognjen Zoric, Branka Mihajlovic and Ljudmila Cvetkovic report for RFE and IWPR in Belgrade.