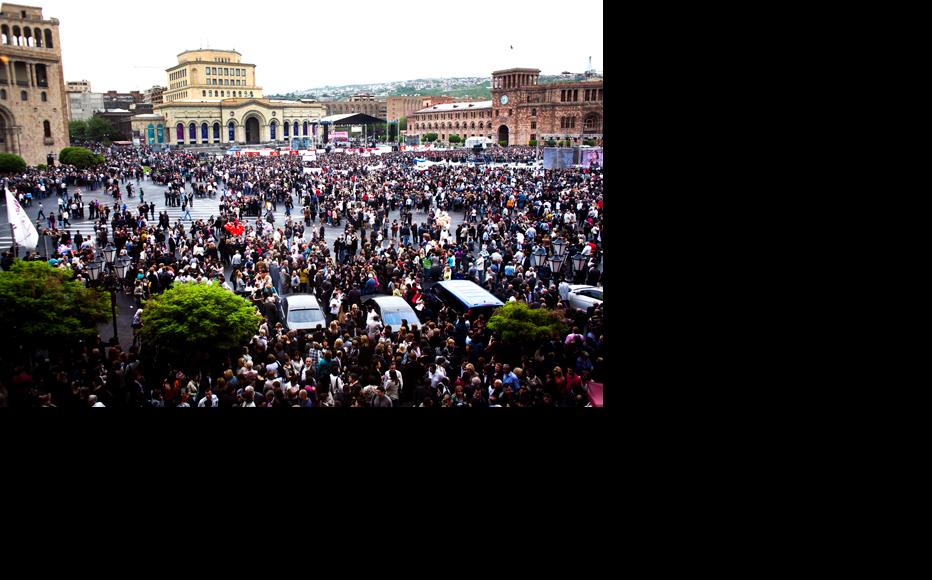 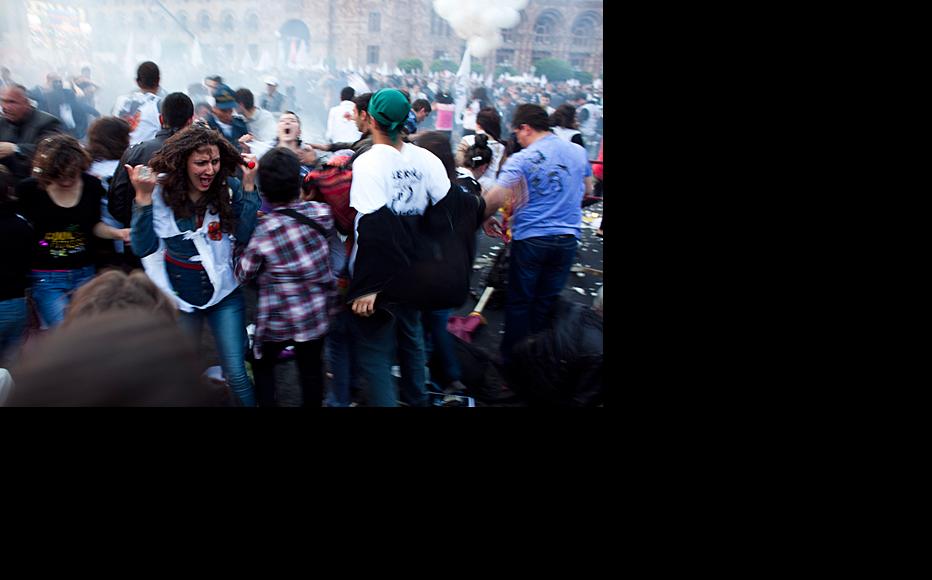 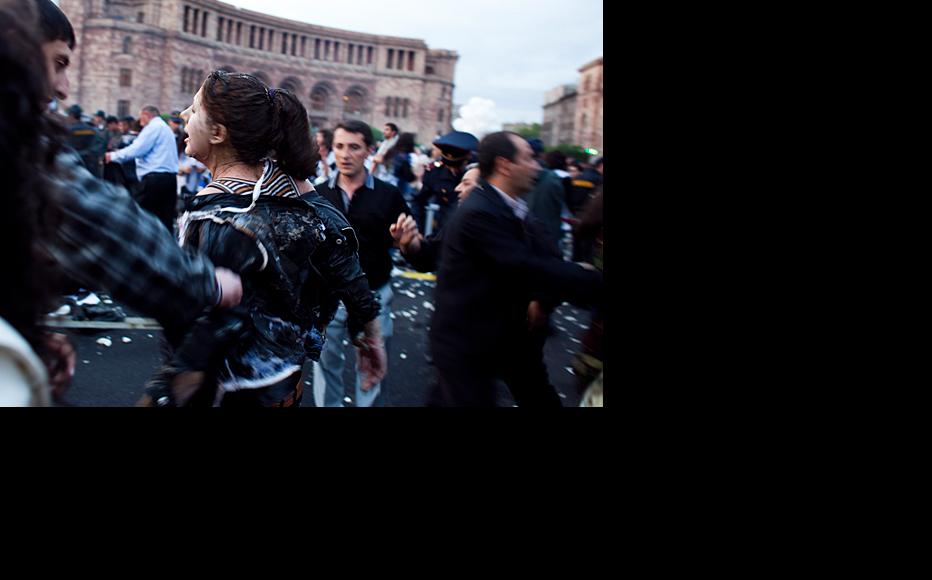 A young woman injured in the blast is helped to remove burnt clothes. (Photo: Inna Mkhitaryan) 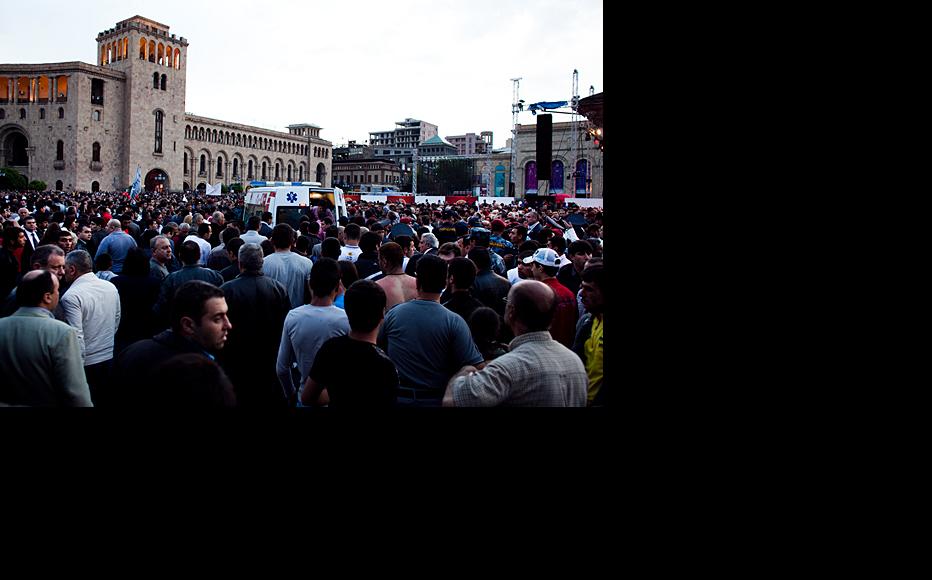 Angry Yerevan residents are demanding to know who is to blame for a gas explosion that injured dozens at a campaign rally on the eve of Armenia’s parliamentary election.

Initial police investigations suggest the May 4 blast was caused by a cigarette igniting balloons in the middle of the crowd attending a campaign rally and concert staged by the governing Republican Party. The balloons should have been filled with the inert gas helium, but organisers appear to have used highly flammable – but cheaper – hydrogen.

Around 154 people, including children, were injured by the sheet of flame that swept over crowd. The rally nevertheless continued, and President Serzh Sargsyan, head of the Republican Party, carried on and gave a his speech.

“The Republican Party as the rally organisers are responsible not just for the balloon explosion, but also for the fact people were forced to wait on the square until Serzh Sargsyan’s speech ended. You can’t justify this by citing the need to avoid panic. If the aim was to avoid panic, then Sargsyan would not have made a speech after such an event,” said Tsovinar Nazaryan, an activist from the Army in Reality civil group.

Although a police investigation is ongoing, Nazaryan said it would be difficult to find who exactly was to blame.

“It’s a shame that in our country it is hard to separate institutions and say who specifically is at fault. But all the same I think the Republican Party is guilty,” she said.

According to figures released on May 10, some 70 people were still undergoing treatment in hospitals, with ten still in intensive care. Most of the victims were students and members of the Republican Party’s youth wing who were closest to the stage. They included people who were holding the balloons when they exploded, and were then burned by plastic that caught fire. Nylon waistcoats bearing the Republican Party logo also caught fire.

Eyewitnesses described how the flames burst outwards so quickly they did not have time to react.

“I fell to the ground after the explosion. My face, hand and back were burned, and I was taken to hospital in a police car. The people who filled these balloons with explosive gas are to blame for not thinking of the possible consequences. I am really angry with these people,” said Andranik Mirzoyan, 20. “Nothing can compensate for the pain and stress which we and our parents have gone through.”

Prosecutors opened a criminal case under a law relating to the safe use and storage of explosive materials.

Rival parties took the opportunity to attack the Republican Party for failing to halt the concert, although it did not harm the party’s electoral performance, since it emerged from the May 6 polls in first place with 44 per cent of the vote.

“The concert continued for two hours after the explosion. I am shocked that at such a critical moment, the government behaved so inadequately. It’s not just that there shouldn’t have been a concert. In such circumstances it was intolerable to have a single speech,” Vardan Oskanyan, head of the rival Prosperous Armenia party, which came second with 30 per cent, said.

The Republican Party replied that it would have been irresponsible to halt the concert abruptly.

“I would say it would have been a crime. If the concert was stopped suddenly, then panic could have started. Apart from this, people had started to leave the square in large numbers, and this could have led to traffic jams so that ambulances wouldn’t have been able to reach the square rapidly,” said Hovik Abrahamyan, head of the party’s campaign team.

After making his speech, the president and Health Minister Harutyun Kushkyan visited the injured in hospital.

“Thanks be to God, we avoided the worst consequences. At the moment, all the injured are receiving the treatment they need, with good results. If necessary, we will summon the best foreign specialists to Armenia,” Sargsyan said in a statement.

His party promised to give all assistance to the injured, and provide compensation as required.

“The injured are our children, our brothers and sisters. I know some of them personally since most of them are members of the youth wing of the party. We will do everything to help them get well again,” said Eduard Sharmazanov, spokesman for the Republican Party and deputy speaker of parliament.