Bosnian Serb ex-officer says troops inside the city were trying to get his men to return fire on civilian areas.

Bosnian Serb ex-officer says troops inside the city were trying to get his men to return fire on civilian areas. 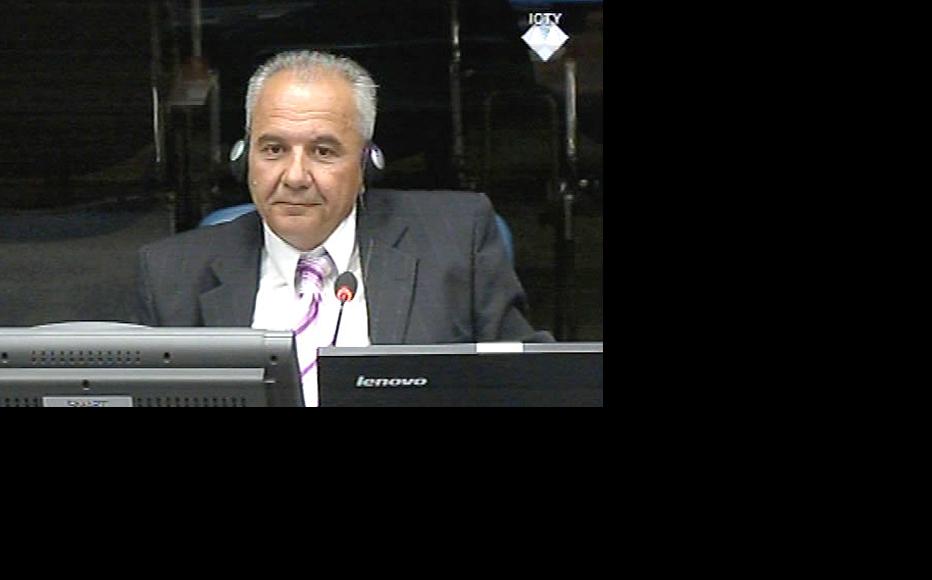 Stevan Veljovic, defence witness in the Mladic trial at the ICTY. (Photo: ICTY)
The link has been copied

A former officer in the Bosnian Serb army told the Hague tribunal this week that the opposing side based inside Sarajevo used a hospital and a historic area to launch attacks from and thereby provoke return fire.

According to a summary of his evidence read aloud in the trial of former Bosnian Serb army chief Ratko Mladic, defence witness Stevan Veljovic held various positions throughout the war, including that of assistant chief of staff for operations and training in the Bosnian Serb army’s Sarajevo Romanija Corps (SRK).

The statement said he “never received or issued an order to shell civilians or civilian facilities in the area of Sarajevo, but [instead] to shell military targets solely and exclusively”. Instead, “legitimate military targets” were identified by “direct observation or intelligence”.

According to the witness, it was the opposing Bosnian government that “made use of different civilian facilities as points of resistance”.

These included Sarajevo’s Kosevo hospital and locations in Bascarsija, the city’s historic Ottoman quarter. The tactic was usually to deploy a “truck mounted with a mortar, which opened fire before moving to another position,” the summary of Veljovic’s evidence said.

The indictment – which lists 11 counts in total – alleges that Mladic is responsible for crimes of genocide, persecution, extermination, murder and forcible transfer which “contributed to achieving the objective of the permanent removal of Bosnian Muslims and Bosnian Croats from Bosnian Serb-claimed territory”.

Mladic was back in court this week after an illness landed him in hospital and caused the trial to adjourn for several days last week. The 72-year-old defendant wore his customary suit and tie, and seemed to be intently following the witness’s testimony.

During the examination, Mladic’s lawyer Miodrag Stojanovic noted that in his statement, the witness stated that “every officer had received a booklet on the international laws of war”.

“Where did the texts contained in the brochure come from, and who printed and issued the brochure?” the lawyer asked.

“We used to have it when we were in the operational units of JNA [Yugoslav People’s Army]. They were distributed by the organ for morale, in the unit command. Practically every soldier had received a booklet like that. We were also trained on international laws of war as was every other soldier,” Veljovic said.

Stojanovic then asked what specific methods the Serb forces used to establish that Bosnian government troops were firing artillery from the Kosevo hospital compound.

“We could see it from our observation point, and each soldier could observe it. There was dedicated soldier in every company and platoon to observe [these things],” the witness said.

Once the defence finished asking questions, presiding Judge Alphons Orie asked Veljovic how often he observed artillery being fired from the Kosevo hospital.

“On several occasions, especially in the evening because you could see the flame from the nozzle and my soldiers called me to see. It was a mobile artillery group, with pieces mounted on the trucks. They would fire and then move on to another position, provoking us to engage the hospital,” the witness said.

“If you say on several occasions – was that four times a year, five times a week? Tell us a bit more in detail about the frequency,” the judge said.

“Several times, because their artillery was mobile. I would say over 100 times during the four years while I was there. They always used one route, opened fire and moved on to another, opening fire again. They would go to Bascarsija, then move to Kosevo [hospital],” Veljovic said.

“So that’s every second week, once? Is that well understood?” Judge Orie asked.

“Well, roughly. I can’t say very precisely. It’s not [like] I took notes every day,” the witness said.

During the prosecution’s cross-examination, lawyer Adam Weber challenged Veljovic’s assertion that the Bosnian Serb army never targeted the Bascarsija area, which dates from the 15th century.

Weber started off by asking whether Bascarsija was the “most culturally and historically important” part of Sarajevo, which the witness confirmed to be true.

“Bascarsija is the old part of Sarajevo and is comprised of old houses and buildings, correct?” Weber continued.

“Yes, old houses built in the Turkish style. The Ottoman Empire reigned in that part of the world, leaving its cultural traces behind. Such buildings were not to be targeted, as [SRK commander General Dragomir] Milosevic personally ordered. Even if fire was opened from such buildings, we were ordered not to engage them. Had we fired a single howitzer battery, all of Bascarsija would be gone. You can actually check that. It is the same as it had been in 1991. It was preserved 100 per cent,” Veljovic contended.

“Is it correct that your view is that it would be inappropriate for the SRK to target Bascarsija because of the cultural importance of its buildings and the significant presence of civilians?” Weber asked.

“Precisely so,” the witness said.

“In fact, Mr Veljovic, there were SRK orders and fire plans to target Bascarsija, correct?” the lawyer asked.

“Actually, the order was not to fire at Bascarsija unless ordered to by the commander. I didn’t see any other documents to that effect. Fire could only be opened if personally approved by General Milosevic while he was in command. You can check – Bascarsija remains the same as it was before the war. The houses are so old and derelict that a single shell could cause major damage,” the witness said.

“Is it correct, then, that any time the SRK fired a shell on Bascarsija, it was approved by the corps commander?” Weber asked.

“No shell was ever fired at Bascarsija,” the witness retorted.

Weber then presented an order from November 26, 1992 stating that SRK units should “support the offensive by engaging fire along the Borije/Bascarsija axis.”

“Is it correct that fire should be engaged from Borije into Bascarsija?” Weber asked.

“You would need to ask that to the gentlemen who drafted this order. At the time I wasn’t part of the SRK command. I’m not familiar with this order. It does read what you say, but it never came about,” Veljovic said.

The lawyer then asked how the witness could claim not to know about the order but at the same time insist it was never acted upon.

“I saw Bascarsija right after the war – nothing was destroyed. I was not part of the command at the time; I could not have seen this order,” the witness said.

Judge Orie chided the prosecutor for the way he formulated the question.

“You can not know anything about an order, but nevertheless establish that what you’ve seen in your life is inconsistent with such an order. When you put the question, you might have come to that thought already,” the judge told Weber.

The Mladic trial continues next week.