President’s influence continues to be felt as insecurity and hunger spreads.

President’s influence continues to be felt as insecurity and hunger spreads. 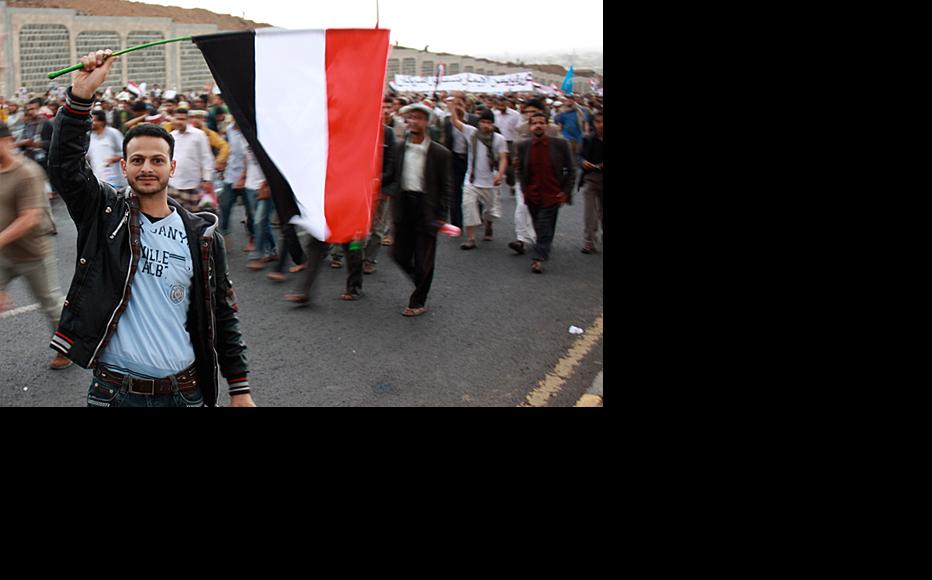 Anti-regime protestors march in Sanaa. (Photo: Kate Dixon/Flickr)
The link has been copied

It is hard for me to predict what will be next for Yemen. Even if embattled president Ali Abdullah Saleh falls, the remnants of his regime are likely to continue to cling to power for a long time.

Saleh himself has been out of the public eye since he left for medical treatment in Saudi Arabia following the June 3 attack on his presidential compound, but he has made two controversial television appearances since he left the country.

I was shocked when I saw his first speech on July 7. His face was clearly burned from the attack, but he was still able to speak in the same authoritative manner in which he used to address the nation and his supporters during his Friday appearances at Al-Sabaen square in Sanaa.

And my shock was combined with sorrow and a sense of embarrassment over how things had turned out. His speech seemed to be a continuation of the chain that Yemen has been struggling to break for almost half a year. I don’t think his speech eased the tension; in fact quite the contrary. If anything, it revived political divisions in the country. His supporters celebrated in the streets in several provinces, letting off fireworks and firing gunshots, resulting in many casualties.

But talk of transferring power to the vice-president and continuing to establish a process to transfer power to a future, democratically-elected president is not a valid option.

There were some suggestions that Saleh would agree to leave power on July 17, the date which marked the anniversary of his coming to power 33 years ago. But that did not take place.

Others wonder whether it would be possible to accept a transition agreement, such as that proposed by the Gulf Cooperation Council, GCC, which gives immunity to Saleh and his relatives.

And some think that Saleh's son Ahmed Saleh, head of Yemen’s Republican Guard and the country’s special forces, could be elected as the next president. What would happen in such a scenario is unclear but I don’t believe Yemeni protesters would allow this.

Any suggestion that Saleh himself could return to the country is condemned by activists.

“We would not accept that. The numbers of youth at Change square would escalate and more bloodshed would inevitably occur,” Muhsen Mansour, a 19-year-old Sanaa protester, said.

But can Yemen maintain the revolutionary momentum? There are many factors on the ground which could act against this.

Recent reports indicate that huge numbers of Yemenis are being displaced, fleeing violence and harsh living conditions amid the unrest.

We also cannot ignore the humanitarian disaster in Yemen. After months of protesting and fighting, the unsteady economic and political situation has led to widespread hunger.

The United Nations has warned of rising food insecurity and called on the international community to provide humanitarian aid, launching an emergency programme to feed tens of thousands of Yemenis.

And beyond the scarcity of food, there is also an oil, gas and electricity crisis in the country - according to the UN, the price of fuel has risen by 500 per cent since January.

Yemen is already the poorest country in the whole of the Middle East and the food crisis currently unfolding can’t help but have a negative impact on how the protests will proceed.

Fears of terrorism – which I believe have long been an excuse to keep Saleh in power – are a distraction from these real issues. The issue of worsening security in Yemen is linked to the deteriorating economic situation, which has long been overlooked.

The average Yemeni lives on less than two US dollars a day, and more than 40 per cent of the population is unemployed.

Saleh's regime lacks legitimacy, and there are many internal conflicts which continue here; but more than three decades of control will not be easy to change.

Afrah Nasser is a Yemeni journalist and blogger now living in Sweden.

The Arab Spring
Yemen
Regime
Connect with us