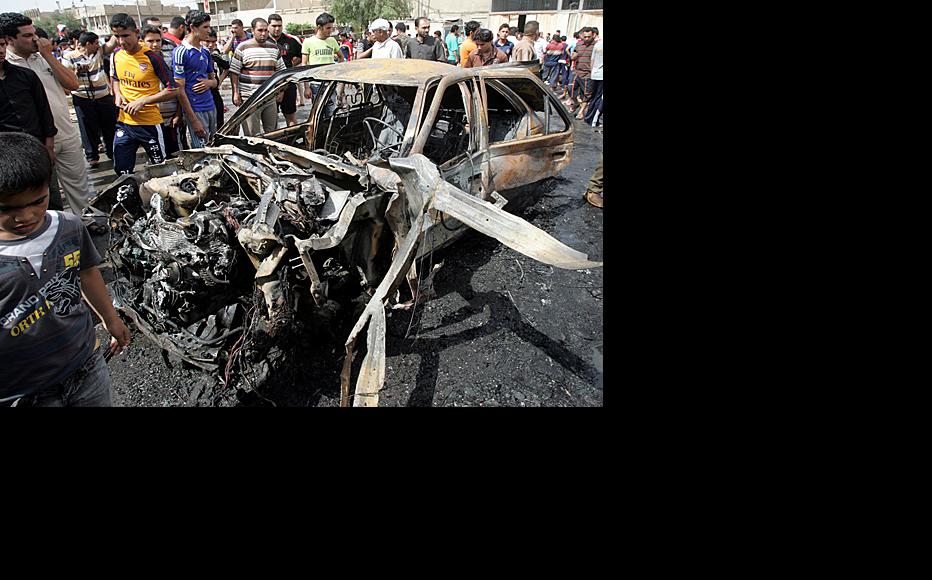 Residents of the sprawling Baghdad slum of Sadr City examine the burned out remains of a car on April 23, hours after the vehicle was used by insurgents to attack a nearby Shia mosque. (Photo: Serwan Azez/Metrography) Elderly women gather to mourn before a mural depicting anti-American cleric Moqtada al-Sadr and other Shia religious leaders on April 23, hours after a series of car bombs struck the Sadr City neighborhood of Baghdad. (Photo: Serwan Azez/Metrography)
The link has been copied

Two days after a series of coordinated bombings struck Shia mosques in Baghdad, Shehab Ahmed Menati was sitting by his father’s hospital bed waving a traditional palm fan to keep the flies and heat away.

“We were at home when we received a phone call from a relative who had gone to Friday prayers with my father. My mother picked up the phone and started screaming,” the younger Menati, a Sadr City resident, said.

At least 72 people were killed in the strikes and hundreds, including Menati’s 42-year-old father Ahmed, were wounded on April 23. The blasts targeted mosques, homes and an area adjacent to the headquarters of the powerful Shia cleric Muqtada al-Sadr.

The targeting of Shia holy sites just four days after the confirmed deaths of two top al-Qaeda leaders prompted the authorities to quickly blame the extremist group for the deadliest day of violence in Iraq so far this year.

Many in the sprawling Shia slum of Sadr City, however, are holding the government to account for failing to protect them once again. In the days since the attacks, residents and religious leaders have come forward to accuse the authorities of engaging in political infighting rather than providing security for its citizens.

“The key reason for this attack is the security forces are not doing their job properly to maintain security in this city. We have had enough of this. We can see that security for us is just a dream, and we don’t expect much from the next government. The government that starts with conflicts and disputes can’t be expected to do much for its people,” said the elder Menati, referring to the political gridlock that has hindered the formation of a new government since last month’s national elections.

Another victim of the blasts, Abbas Swadi Najim, 34, said he thought he would be safe inside a mosque, only to be proved wrong by the deadly explosions that brought the building crumbling around him while he knelt on his prayer mat.

“We have lived through many black days such as this one. Where is the government? What are the security forces doing? We have learned all their excuses by heart. Everyone here lives in fear and the future is bleak,” Najim, owner of a home supplies store, said.

Security officials have defended their performance, although some have said they anticipate more attacks aimed at stirring problems between Iraq’s Shia and Sunni communities.

“We had ordered all security divisions in Baghdad to give high priority to holy places and mosques because we have noted that Shia mosques were targeted in the last attacks. The goal of the attacks is clear: stoking sectarian tension in Baghdad and in all Iraq,” Qasim Atta, spokesman of Baghdad Operation Command, said.

“The strikes last Friday in Baghdad were car bombs and suicide bombers wearing explosive belts. The bombs were detonated outside the security circle used to protect mosques during Friday prayers. This means that bombs were not security breaches because they did not cross the circles guarded by Iraqi security forces.”

Atta says the atrocities were an act of vengeance from al-Qaeda, although some community leaders have disagreed, saying such a complicated, synchronised series of attacks would take much longer to plan.

“These were revenge for the heavy blows we directed towards al-Qaeda and the killing of two of their leaders. We expected such attacks because al-Qaeda will not give up easily in Iraq. It will struggle to prove its presence, even though its power is almost finished,” Atta said.

The apprehension of future violence is palpable on the streets, said Sheikh Sabah al-Sudani, imam of the al-Sadiq mosque in the Shuala neighbourhood.

“The situation is very critical and people are very scared of more sectarian violence. The joy of security and stability was short-lived, and now the citizens are confused,” Sudani said. “On the day of the explosions, we tried our best to convince people not to be driven by revenge and malicious plans that could drag the country back into war. But for how long can we convince them?”

In response to the attacks, Sadr called on his followers to defend themselves and their local mosques. Some analysts saw this as a rare offer of assistance to Prime Minister Nuri al-Maliki’s security forces, while others feared the return of Sadr’s once-powerful Mehdi militia, which has been largely dormant since defeat at the hands of a joint United States-Iraqi offensive in 2008.

“These explosions were meant to force Sadr into battle. But the situation now is different from how things were in 2006 or at other times. Today, the [Sadrists] have a wise leadership and won’t be driven into such reckless action,” said Fatah al-Sheikh, a newly-elected deputy from the Iraqiya coalition who is close to Sadr.

Whether or not the Sadr faction takes a role in defending the Shia community and its mosques, some of the group’s leaders place the blame for the attacks squarely on the government.

“This is the government’s problem. The government is unable to maintain security. The enemies of the Iraqi people seized their chance due to the tense atmosphere on the street and government’s failure. The continuous disputes between political parties will only bring more problems,” said Salman al-Furaiji, head of the Sadr office in Baghdad’s Shia-dominated Risafa district.

Atta said that the government is required to protect all citizens and is forbidden to favour one group’s security over another’s.

“The accusations against security forces are angry reactions made by some people and we understand them. We would like everyone to know that we as security forces have had a lot of casualties and deaths from bombs as well. Our fate is the same, and for this reason we must all cooperate to get rid of terrorism,” Atta said.

Ali Kareem is an IWPR-trained journalist in Baghdad.