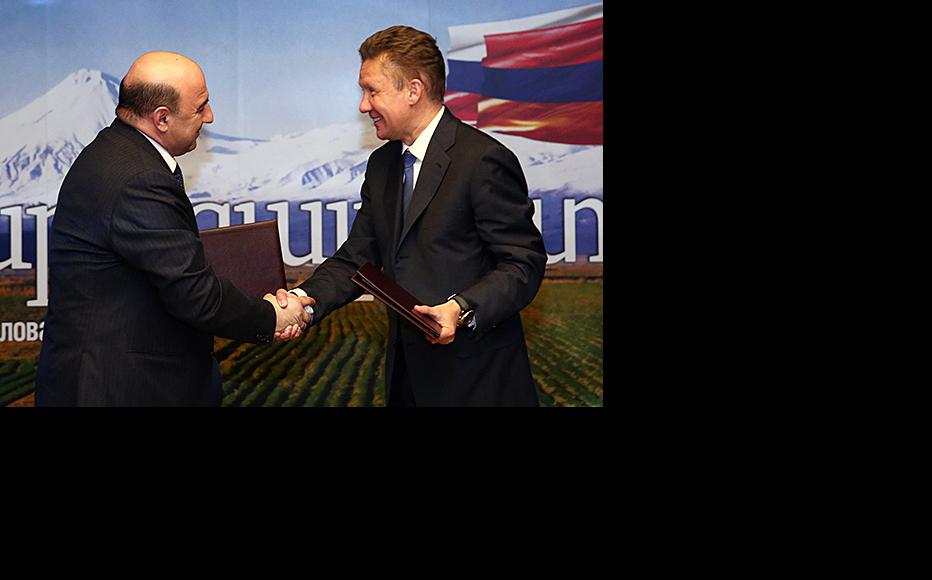 Armenia has ceded control over all its natural gas infrastructure to the Russian energy firm Gazprom, with a commitment not to buy elsewhere until 2043. In return, gas prices will be held down.

Under the terms of a deal signed in Moscow on January 16, Gazprom acquires the 20 per cent of the Armenian gas distributor that it did not already own. In return, debts owed to the Russians were written off.

Now a wholly-owned subsidiary of the Russian firm, the company is changing its name from ArmRosGazprom to Gazprom Armenia. As well as having a monopoly on purchases and sales, it owns the domestic pipeline network including both import routes – from Russia via Georgia and from Iran.

Over the last two decades, Armenia has remained reliant on Russian fuel supplies, and has steadily handed over slices of its gas network in exchange for debt write-offs. Some gas has been imported from Iran since 2007. This is used to generate electricity, some of which is returned to Iranian consumers.

The energy ministry told IWPR he was happy with the terms of the sale.

“This is a good deal for Armenia,” Movsisyan said. “We have resolved two important matters. First, we have insured ourselves against any rise in the gas price until 2018. As you know, international gas prices have risen continuously for the last ten years – I can’t remember a time when they’ve fallen. Hence, this is important for our nation and for business.

“Second, the deal has allowed us to pay off a debt of around 155 million dollars to Gazprom, which had built up mainly due to gas supplies in 2013.”

Movsisyan’s upbeat assessment was not shared by opposition politicians.

Vahagn Khachatryan of the Armenian National Congress said it reminded him of “the age of colonialism”.

“Can you explain to me why the Armenian government has handed over our country’s entire gas delivery system to this foreign gas giant, thus depriving our citizens and companies of any chance of buying gas from a different firm or country? Or why a deal has been signed with such enslaving conditions lasting all the way until 2043?” he asked. “I would suggest that this is really about corruption.”

Hayk Gevorgyan, an economic columnist for the Armenian Times, pointed out that while gas would now be cheaper than it was previously, it is still more expensive than in Russia, Kazakstan and Belarus, the three members of the Customs Union. Armenia agreed to join the Customs Union last year.

“That means our economy will end up being uncompetitive with the others in the Customs Union,” Gevorgyan said.

The Gazprom deal was overshadowed by a diplomatic row caused when Iran’s ambassador to Yerevan, Mohammad Raiesi, said Armenia had never explored the possibility of buying more of its gas from his country. BP estimates that Iran has the world’s largest reserves of natural gas, with Russia in second place.

“We decide for ourselves what price we will sell gas to friendly countries at,” Raiesi told reporters in December. “Only through talks would it have become clear whose gas would be cheaper.”

His comments provoked a discussion in Armenia’s parliament, although Movsisyan disputed the accuracy of the points the ambassador had made.

Ruben Mehrabyan, an analyst with the Centre for Political and International Studies, sees Gazprom’s takeover as a way for Moscow to consolidate its political and economic presence.

“In the wake of its recent [nuclear] agreement with the United States and Europe, Iran is gradually opening up to the world. Russia wanted to insure itself against Iranian gas reaching other post-Soviet countries via Armenia,” he told IWPR. “In future, the Kremlin will be able to decide what price it sells us gas at. Looking at events in Ukraine, I can say for sure that gas will be a lever in the hands of the Putin administration with regard to Armenia, too.”

Tigran Gevorgyan is a freelance journalist in Armenia.

Armenia, Russia
Economy
Connect with us