Russian leader Vladimir Putin seals renewed alliance with trip to Yerevan, although some take to the streets for Ukrainian-style protest.

Russian leader Vladimir Putin seals renewed alliance with trip to Yerevan, although some take to the streets for Ukrainian-style protest. 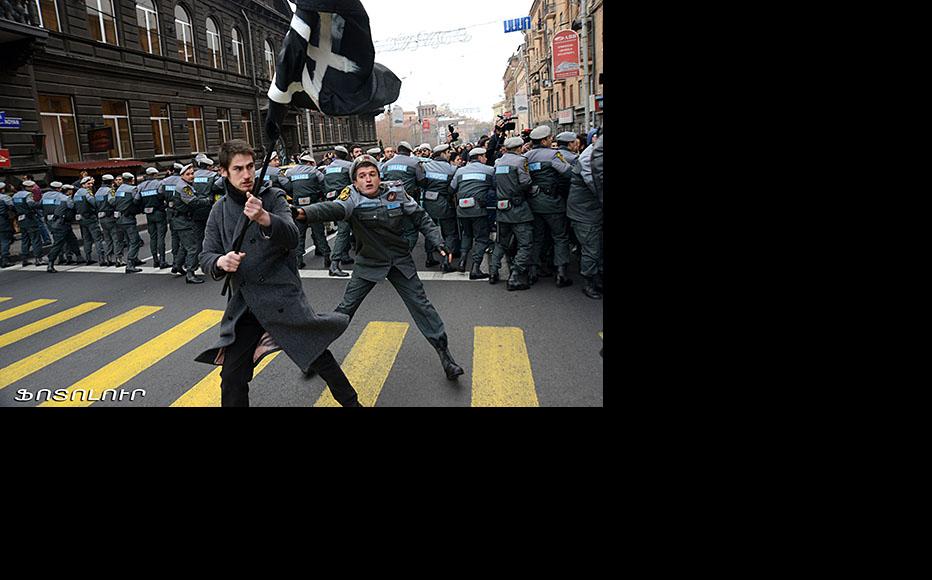 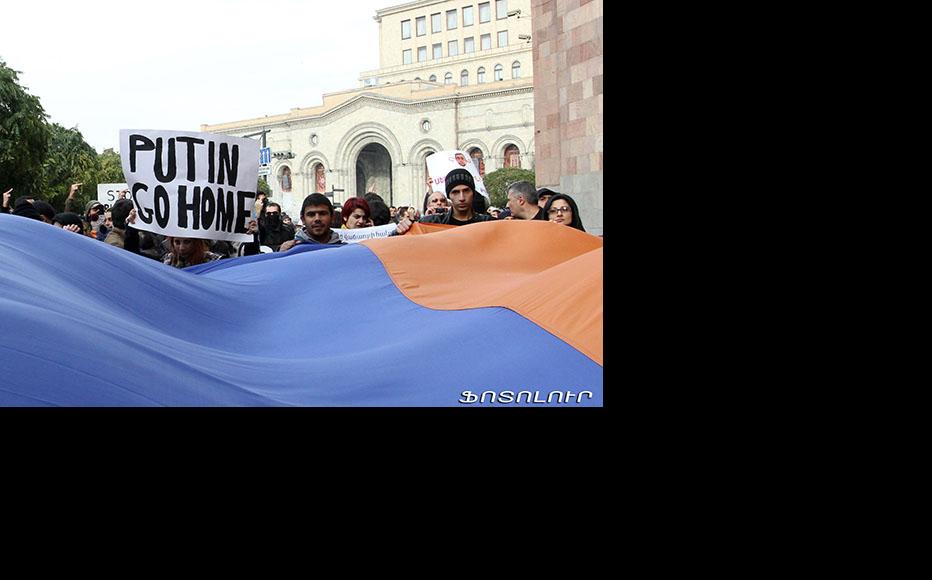 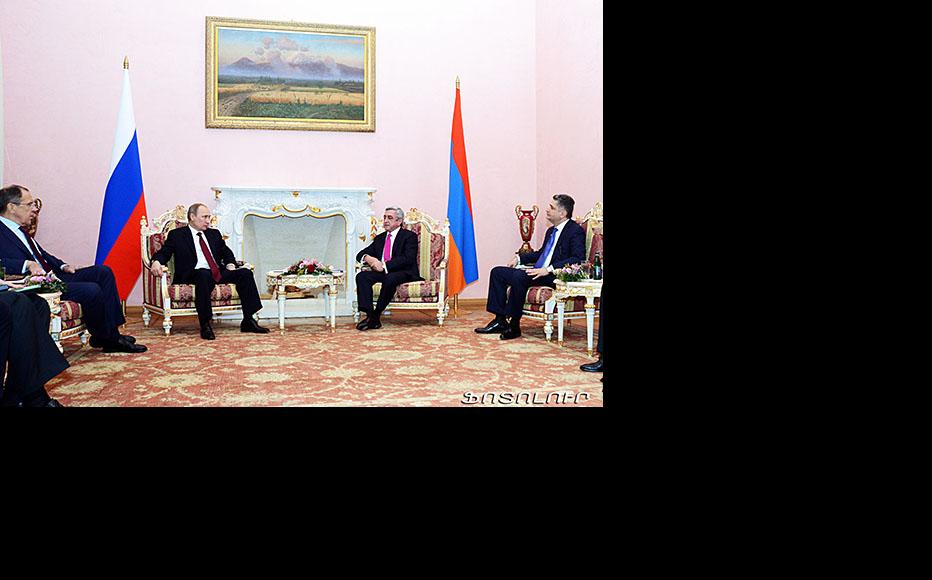 Presidents Serzh Sargsyan and Vladimir Putin meeting in Yerevan on December 2. (Photo: Armenian president&#039;s website)
The link has been copied

In a deal seen as a reward for Armenia’s decision to join a Moscow-led trade grouping, Russia is to reduce the price at which it sells natural gas to the energy-poor country.

On October 24, Armenian president Serzh Sargsyan signed an agreement paving the way for accession to the Customs Union, whose current members are Russia, Belarus and Kazakstan.

Sargsyan’s announcement of plans to join the trade bloc in early September came as a shock since up until that point, everyone had been expecting Yerevan to sign an Association Agreement with the European Union at the November summit in Vilnius.

When Russian president Vladimir Putin arrived in Yerevan on December 2, he came bearing gifts, notably a cut in the prices of gas exported to Armenia, from 270 to 189 US dollars per 1,000 cubic metres.

Moscow also announced a write-off of 155 million dollars in debts in exchange for all the stock in Armenia’s gas distribution company that Russian energy giant Gazprom did not already own. This means the Armenian government is ceding the 20 per cent it still holds in ArmRosGazprom, and hence its remaining leverage over gas imports, distribution and sales.

While the deal looked like payback for Armenia turning its back on closer ties with the European Union, Sargsyan merely said it showed the excellent state of the relationship with Moscow.

“This is the act of a real friend and partner,” Sargsyan told Putin.

Many Armenians disagreed, and they made their feelings known on December 2, when several hundred took to the streets of Yerevan to demand an end to plans to enter the Customs Union. Carrying banners reading “Putin Go Home”, “Stop Russia” and “No to Customs Colonisation”, the protesters were stopped by police from reaching the presidential residence where Sargsyan was meeting Putin.

They were inspired by the massive demonstrations taking place in Ukraine, where President Viktor Yanukovych had similarly ducked out of signing a EU deal under pressure from Moscow.

Former foreign minister Alexander Arzumanyan said the protests in Yerevan were smaller because Armenians were generally less aware of the implications than the Ukrainians were.

“Citizens don’t know; they haven’t had it explained to them what losses Armenia will suffer by rejecting an EU Association Agreement,” he told IWPR.

David Shahnazaryan, former head of the National Security Service, said that while the protests were small, they were nonetheless significant.

“The fact that a protest has taken place in Yerevan during a Russian president’s visit is unprecedented,” he said. “As we’ve seen with gas, Russia is trying to take everything that it can. And it will be the same with the Customs Union. It’s clear the Putin regime wants to restore the Soviet Union, but it isn’t clear what our government wants. Does it want to surrender Armenia just so that it can stay in power?”

Sargsyan did attend the November 28-29 Vilnius summit of the EU’s Eastern Partnership. He signed a document, but it amounted to a non-binding commitment to increase cooperation with the EU – a radical step back from the Association Agreement that diplomats had spent four years negotiating before Sargsyan’s abrupt volte face in September.

After returning from the Lithuanian capital, Sargsyan said, “Vilnius is not an end. After Vilnius, life goes on. The joint statement with the EU is how we see the future today.”

Both EU and Armenian officials made it clear that an Association Agreement was off the agenda and would not now be signed, in light of Yerevan’s new policy course.

In Armenia, commentators and civil society activists expressed regret that progress towards the EU had reached a dead end.

“Our country has been negotiating with the EU for more than three years. The president, prime minister and foreign minister have stated on several occasions that the country is determined to simplify its relationship with the EU. And then, with just weeks to go before signing the deal, Sargsyan held talks with Putin in Moscow and said we were going to join the Customs Union,” Arzumanyan said. “If Kremlin pressure isn’t the reason for this sharp change in Armenia’s position, then what could it be?”

Ruben Mehrabyan, a researcher at the Centre for Political and International Studies in Yerevan, said that giving up on EU integration meant that any chance of implementing serious reforms had been lost.

“Such reforms would cover not just the economy, but also the political and judicial systems. Armenia has lost the chance to develop and make progress,” he said. “The national leadership has exchanged a half-billion-population [European] market for a Customs Union with 170 million people, with countries where old, authoritarian regimes survive by selling oil and gas.”

“This visit was yet another display of Russia’s arrogant disdain for Armenia’s hard-fought independence and feeble sovereignty, Giragosian said. “It shows that with an ally like Putin, Armenia doesn’t need enemies.”

Girogosian said that while it was important for Armenia to maintain close ties with Russia, “it is neither strategic nor much of a partnership, and it underlines that for Armenia, the problem is not the relationship, but the lack of respect from Russia and the asymmetry and imbalance in this alliance”.

“Russia is our main trading partner. A significant part of our industrial products are exported to that country, and joining the Customs Union will have a positive impact on us,” she told IWPR.

Vahe Harutyunyan is a freelance journalist in Armenia. Yekaterina Poghosyan is a reporter for www.mediamax.am in Armenia.

Russia, Armenia
Economy
Connect with us