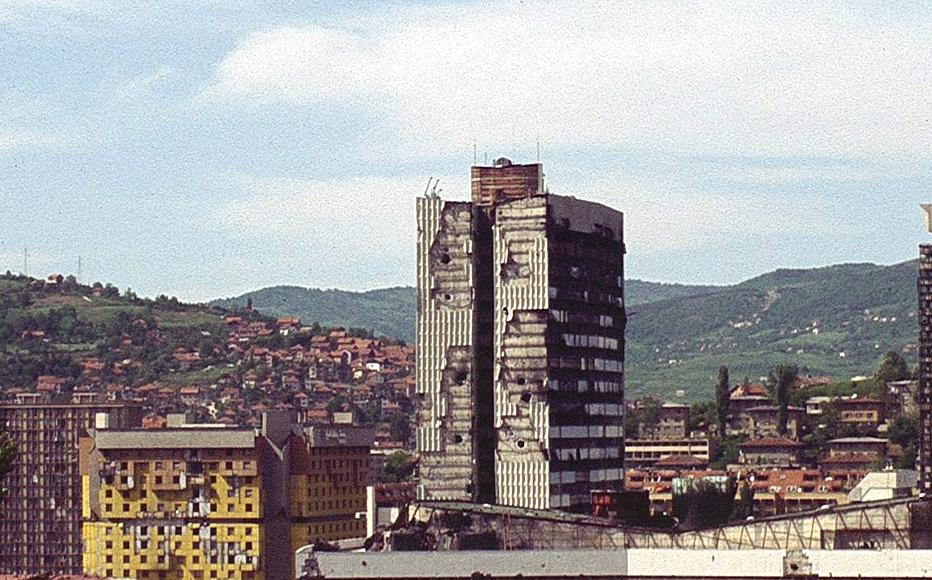 Physical contact and strong social bonds got us through the war. Nothing could prepare us for social distancing.

Panorama of war scarred Sarajevo taken in 1996, just after the siege ended. © Quasimodogeniti/Wikimedia
The link has been copied

When Bosnia declared a nationwide state of emergency on March 17 due to the coronavirus pandemic, a friend sent me a message asking how I was. I said I was fine, but worried about the impact that the outbreak and the indefinite lockdown would have on people’s lives and the economy.

“Don’t worry, everything will be fine,” he responded. “We survived the war and we’ll survive coronavirus, too.”

For the first few weeks of lockdown, that was the mantra for many of the Sarajevans who lived through the 1992-95 siege. After all, how could a limited period of isolation with all the modern commodities at our disposal be worse than being exposed to shelling and sniper fire from the Bosnian Serb army positions around the city for three and-a-half years? How could a little discomfort be compared to the lack of running water, electricity and food during the siege in which more than 11,500 citizens of Sarajevo were killed and many more wounded?

But as time progressed, we have started to notice that the experience of surviving the longest siege in Europe’s modern history had not prepared us for the challenges of a life on lockdown.

Of course, there are some striking similarities between the wartime siege and the current lockdown. Just as in the early 1990s, a curfew has been imposed and freedom of movement is very limited, particularly for those under 18 and over 65. The enemy is unseen – just like the Bosnian Serb forces firing at the city were invisible back then – and targets appear to be just as random. We know that we can suddenly die, or lose friends and family members. We can’t travel, go to school or to a local restaurant, we can’t attend a football game, or visit the hairdresser when we please.

But this is where similarities between the coronavirus lockdown and the siege of Sarajevo end. These days, we have everything we need for survival and a comfortable life: running water, electricity and enough food. We also have the internet, which did not even exist in the early 1990s.

What we don’t have is physical contact with other people – be it friends, work colleagues, or members of our extended families. The psychological effects seem to get worse as time goes by.

Surprisingly, many Sarajevans complain about social distancing more than they ever did about harsh living conditions under the siege.

Another friend of mine, who was 21 when the war broke out in Bosnia, told me recently that she found social distancing exceptionally hard. She said she had never lost her spirits during the siege, but that she was now really struggling to fight off depression.

Physical contact and strong social bonds were invaluable in wartime Sarajevo.  People spent time together, helping, supporting and comforting each other. Residents of entire buildings slept in basements during heavy shelling, and spent days exchanging stories from the past, or commenting on the news they listened to together on battery-operated radio receivers. Many Sarajevans believe that it was the proximity of other people, and the sense that they all shared the same destiny, that helped them remain sane during those grim years.

These days we have everything we need to live comfortably while barricaded in our apartments. We have Skype, Zoom and other online communication platforms that keep us connected to other people, but we are also painfully aware that they are a poor substitute for real, person-to-person interaction.

We can have virtual tours of museums, or watch music and theatre performances from around the world. And yet, we enjoyed the wartime concerts, plays and film screenings held in improvised venues in besieged Sarajevo much more, because they were real and we could share the experience with other people.

What Sarajevans find particularly hard now is that they are requested to stay at home and remain passive until the immediate danger is over. This is in stark contrast to the way we operated during the siege. Back then, our days were filled with many simple tasks that were necessary for survival – from fetching water to finding firewood, preparing meals, cleaning, and washing.

Doctors not only risked their lives to help others – just as many of them are doing now – but adapted quickly to the new circumstances. If there was no electricity in operating rooms, they would use car lights connected to a car battery. If they didn’t have gas for the emergency cars to bring the wounded to the hospital, they used cooking oil. Their personal protective equipment was home-made and inadequate, but that never stopped them from doing their job.

Given modern restrictions and bureacracy, the innovation that we relied on back then doesn’t always translate to our current situation. A well-known wartime physician from Sarajevo, Dragan Stevanovic, has openly criticised his colleagues for their response.

“In 1992, we went to frontlines to help the wounded. We performed surgeries under horrible conditions, without electricity and proper protection, and we improvised all the time in order to save people’s lives. These days, we refuse to help patients suspected of being infected by coronavirus because we don’t have proper personal equipment, because we are afraid of getting infected ourselves, and we can’t improvise because we are afraid of being sued,” Stevanovic wrote on Facebook.

In a recent op-ed in the LA Times, journalist Barbara Demick said her experience of covering the Sarajevo siege provided her with an invaluable lesson and has affected the way she views the crisis in the US caused by the coronavirus. Demick argued that if Sarajevans managed to survive the siege for three and-a-half years under constant shelling and without basic commodities, then her fellow Americans will survive the temporary emergency measures and the loss of lives as well.

And all that is true. One thing that the siege of Sarajevo has taught us is that this, too, shall pass. One can only hope that it will be sooner rather than later.

Merdijana Sadović  is IWPR's regional director for the Western Balkans.