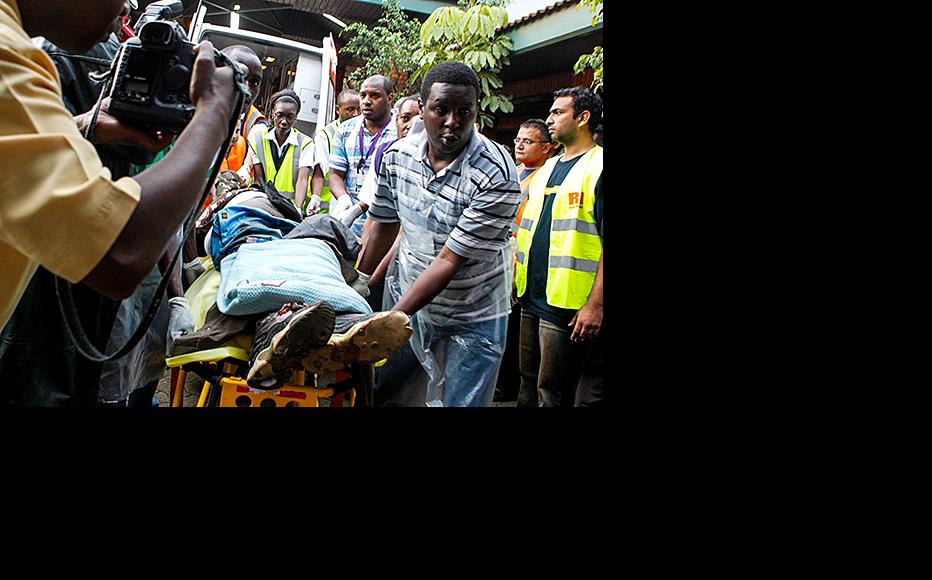 With 67 people confirmed killed over days of violence, 61 more are still missing, according to the Kenyan Red Cross. Dozens may be buried under rubble after an explosion at the Westgate mall on September 23. (Photo: Capital FM)
The link has been copied

Nearly a week after al-Shabab gunmen burst into a Nairobi shopping mall, Kenyans are still flocking to the city’s central morgue in search of their loved ones.

At the Nairobi City Mortuary, relatives and friends of missing people queue up to identify them among the mass of bodies that has piled up over recent days.

Outside, traders sell wreathes to the bereaved. Inside, bodies are piled one of top of another on metal blocks and tables. Due to a lack of refrigeration, the stench of decomposing flesh is overpowering.

With 67 people confirmed killed over days of violence, 61 more are still missing, according to the Kenyan Red Cross. Dozens may be buried under rubble after an explosion at the Westgate mall on September 23.

A mortuary worker told IWPR that a government official had told staff there to prepare to receive more dead.

Zipporah Mureithi is one of the people searching for relatives.

“We have searched from hospital to hospital since Saturday and the morgue seemed like our last resort,” she said.

Inside the morgue, her worst fears are realised – her father’s body lies among the dead.

Zipporah cries uncontrollably. Inconsolable, she repeats her father’s name again and again. As if she does not believe her own eyes, she paces in and out of the morgue where her father lies next to countless others.

Mary Italo has come to look for her son. Too distraught to speak, she repeatedly tries to undress herself, a customary way of expressing grief among some ethnic groups in Kenya. Her relatives console her and try to calm her down.

“Her dead son was a worker in one of the restaurants at the Westgate mall,” a relative who accompanied her explained. “He was shot in the chest and died instantly.”

Minibuses and black hearses drive in and out, transporting both bodies and the relatives of the deceased.

After identifying her father’s body, another visitor, Mary Gakii, drops to the ground. Her sister, Ann, stands staring blankly into the distance.

“This is a very sad day for our family,” another relative said. “Had he been sick, we could have prepared ourselves psychologically, but he was just shot suddenly by al-Shabab.”

Another man does not even look up as his brother’s body is carried from the morgue to a waiting hearse.

His eyes scour the ground as if searching for something.

The dead man had driven his boss’ family to the mall on the morning of September 21, before hooded gunmen forced their way through security barriers, shooting indiscriminately and throwing grenades.

Those who could ran to safety. Others hid for hours waiting for a chance to escape.

Closed-circuit television footage released since the attack showed gruesome images of the victims.

International forensic and security experts continue to scan the centre for bodies and clues as to the identity of the attackers.

On September 25, President Uhuru Kenyatta announced three days of national mourning. Flags on public buildings are flying at half mast across the country.

In a television interview this week veteran radio personality Kamal Kaur described how she escaped from the shopping centre.

The attackers fired bullets and hurled grenades into a group of children who were there for a cooking contest she was hosting.

“I had around 30 to 35 kids with me,” Kaur said in the interview. “When the blast went off I tried to protect them by ordering them to get down and lie on the floor. After the blast and screaming from the kids, the shots started coming in.”

A bullet narrowly missed Kaur’s son and lodged in the neck of a little boy, who died on the spot.

“And the poor boy, I tried to put my hand there to stop the bleeding,” she said. “I don’t know what I was doing but I could not save him."