Reaching Out To Ukraine's Occupied Territories

New broadcaster will aim to combat propaganda while winning hearts and minds.

Reaching Out To Ukraine's Occupied Territories

New broadcaster will aim to combat propaganda while winning hearts and minds. 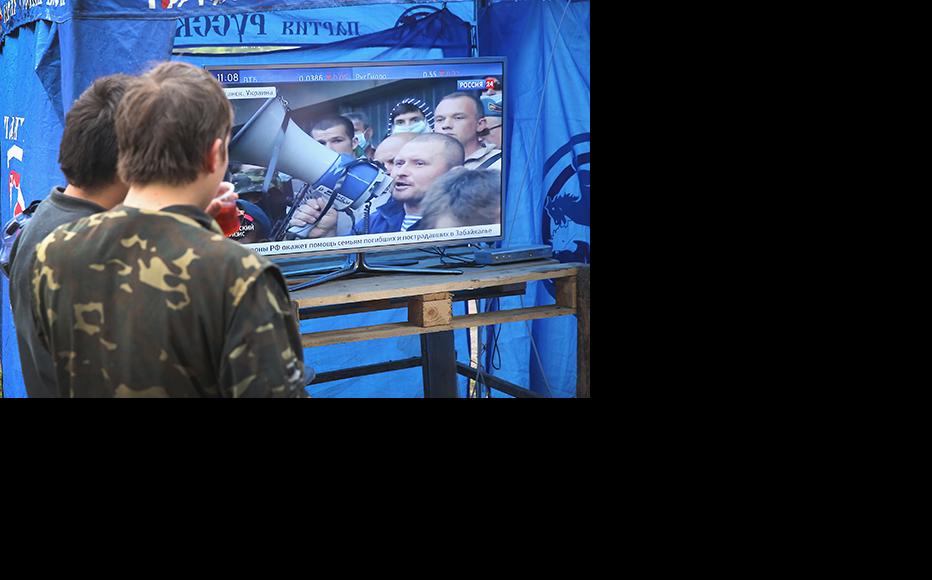 Pro-Russian activists watch a Russian news report about activities in Lugansk. (Photo: Scott Olson/Getty Images)
The link has been copied

Ukraine is to launch a global Russian-language television channel in an attempt to court public opinion in the occupied east of the country.

Ending the conflict with Russian-backed separatists was a key promise of Volodymyr Zelenskiy when he won presidential elections this year. This latest initiative appears to be a further attempt to win over hearts and minds in an area where there is little independent journalism or access to non-Russian-state media.

Kyrylo Tymoshenko, the deputy head of the president’s office, told Interfax-Ukraine that the project would launch in late September or early October.

“The people living in the east are our citizens, not traitors, not collaborators, they are Ukrainians, no matter what language they speak, and they must know that, as well as Ukrainians all around the world,” Tymoshenko said.

Ukrainian experts and officials agree that they are losing the information war with Russia.

“The fact of creating such a channel is a big step itself,” said Andrey Buzarov, a political analyst and co-founder of the Kyivstratpro consultancy agency.

“I think that this is the most suitable time for launching such a channel, and as far as I know, it is not solely Zelensky’s personal initiative,” he continued. “There are many people from Zelensky’s team and… Servant of the People party [lawmakers] who have vouched for this idea. I think it is absolutely realistic and Russia’s hybrid war against Ukraine cannot be an obstacle in this case.”

The target audience will be aged 18 to 54 years old and the format will be a combination of news and entertainment. The channel will broadcast through digital terrestrial format and satellite.

In 2014, in the early stages of the armed conflict, the administration of then-president Petro Poroshenko also mooted plans on reaching out to a Russian-speaking audience living in Donbas.

However, the idea came to nothing. Vitaliy Sizov, an analyst with the Donetsk Information Institute NGO said that this was because Poroshenko had little interest in the electoral support of residents of the occupied territories. The current administration had a different attitude.

Sizov said that “Zelensky, himself a Russian speaker and a former television star, had “attracted the attention of the entire Russian-speaking community.

“Zelensky became popular here even before his presidency and his media product was successfully sold in Russia as well. And it would be great to use all these opportunities to work with the Russian audience and spread alternative information and opinions,” he noted.

There are few sources of information in Crimea and parts of Donbas. Ukrainian journalists have long been persona non grata, with dissenting views severely suppressed.

Stanislav Aseev, a writer and journalist who uses the pen name Stanislav Vasin, has been detained by the Donetsk People's Republic (DPR) for more than two years.

Media outlets loyal to or directly controlled by the DPR or the Luhansk People's Republic  (LPR) often describe Ukrainian officials and soldiers as fascists and occupiers, portraying the armed confrontation in the east as Kiev’s aggression against civilians.

Russia state media follows the same lead. In one notorious example from July 2014, Russian Channel One ran a fake story about a three-year-old boy from Slavyansk, who was supposedly crucified in front of his mother by Ukrainian soldiers.

There is also a battle for the airwaves. A year ago, Ukraine switched to digital broadcasting with exception of the conflict zone and areas bordering Russia. The cabinet extended analogue broadcasting in the Chernihiv, Sumy and Kharkov regions, as well as in areas bordering the occupied territories, until December 31, 2019.

In April 2019, the Ukrainian signal disappeared in the frontline districts of the Luhansk region after six entities of the Enterprise for Radio Broadcasting, Radio Communication and Television were cut off due to unpaid bills. Russian and separatist media outlets quickly flooded the local television and radio broadcasts.

According to a study by the Donetsk Institute of Information carried out in September 2017, hate speech appeared in more than 20 per cent of stories by media outlets controlled by militants. Monitoring included four major DNR newspapers and TV channels, as well as their Ukrainian equivalents, over a period of three weeks.

In 2015, the Ministry of Information Policy of Ukraine (MIP) was established to tackle the problem, headed by Poroshenko ally Yuriy Stets. However, the ministry’s effectiveness has always been in question. Zelensky’s office is now planning to absorb it within a unified ministry for humanitarian policy.

Buzarov said that it had been “clear to everyone that the system was very poor. But the question is whether it was done deliberately or it happened accidentally that no one fought for the minds of our citizens on the other side”.

Poor funding has also affected the ministry’s effectiveness. In 2018, 360 million UAH were allocated from the state budget. A year later, funding was cut by 100 million UAH.

The MIP and the Ministry of Occupied Territories are the poorest among all government institutions and this year were allocated 0.03 per cent and 0.01 per cent of the state budget respectively.

Out of 38 MIP employees, five are dedicated to reintegrating citizens in the east into a shared information space so that all can have access to the same resources

In 2017 Stets argued that Ukrainian television and radio analogue coverage covered 70 per cent of the border with the occupied territories. He claimed it would be impossible to increase it much further due to the geographical features of the region, which has numerous industrial waste heaps.

However, the latest communication strategy for Donbas includes jamming the signal of separatist broadcasters and boosting that of the Ukrainian side. Viktor Litvinov, a senior MIP official, said that work to increase the reach of the Ukrainian signal on the border with Crimea and the contact line in Donbas was in progress.

“We must realize that unfortunately, we are not the only ones who are fighting for broadcast,” he continued. “On the part of the occupied territory, there are ongoing activities to block the Ukrainian signal and modernise existing television and radio infrastructure. New towers are being built on the border with the Russian Federation and the signal of Russian television and radio broadcasting is transmitted exclusively in the direction of Ukraine.”

As for the format of the new broadcast content, Sizov argued that infotainment was the perfect medium but questioned whether sufficient funds were available.

“The idea of reaching the Russian-speaking community is quite attractive,” he said. “However, the question is whether a country with a small budget has enough resources for its implementation - and it should not be limited to only a TV channel.”

Giving Voice, Driving Change - from the Borderland to the Steppes
Ukraine
Broadcast, Media, Conflict
Connect with us