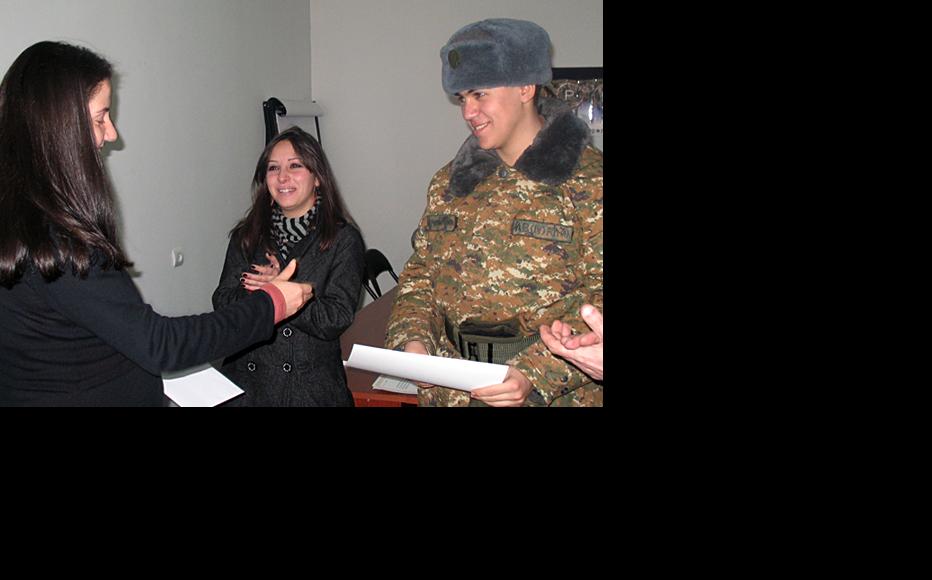 First place in IWPR Armenia journalism contest went to Suren Stepanyan, who had joined the army since submitting his entry. (Photo: IWPR) A competition for radio journalists run by IWPR in Armenia highlighted the quality of many local reporters’ work but also indicated how much needs to be done to improve standards generally.

The contest opened in November 2011, and by the closing date of December 22, applicants had submitted 20 pieces produced for national and community-based radio stations.

The focus was very much on younger journalists based outside the capital Yerevan, writing on democratic accountability and youth issues.

The winners selected by a panel of three judges were announced on Radio Van’s “Five O’Clock” show.

First place was awarded for Suren Stepanyan, who produced a report for Impulse radio station on the environmental campaign to save the Trchkan waterfall, an area of natural beauty threatened by a hydroelectric dam project.

By the time the winners were announced, Stepanyan had joined the Armenian army, but was given special leave to come and collect his prize in person.

“I’m very grateful to receive this award. I think the Trchkan waterfall was a very interesting and urgent problem. Reporters managed to reveal the issues so that many people became aware of them. That was a great achievement for us,” he said at the awards ceremony.

Yana Shakhramanyan, also from Impulse, came second with a report on the younger generation of Armenian scientists, while third place went to Nune Martirosyan, a journalist with Max Liberty with RFE/RL’s youth programme, whose report was about musicians.

Discussing the submissions both in their private deliberations and in the course of the Radio Van show, judges found that there was still a lot to do to raise standards in radio reporting, especially when it came to covering complex and sensitive matters including the concerns of young people, which are underreported in the mainstream media.

"When I listened to the material submitted for the contest, it was clear to me that 70 per cent of applicants had generally ignored the basic rules of journalism, focusing only on the emotional factor,” one of the judges, Arman Suleymanyan of Radio Van, said. “I think there needs to be further work with the [unsuccessful] applicants to point out the shortcomings that prevented them from winning. I’m ready to work with them. If such competitions are held regularly, radio reporters will become more attentive and better at submitting quality material.“

Another judge on the panel, Marine Manucharyan, head of the Civic Forum NGO, said the key was to encourage journalists to overcome stereotyped attitudes.

“It isn’t just about preparing a good story; we also need to shape a balanced and accurate approach to issues concerning religious organisations, women and young people,” she said.