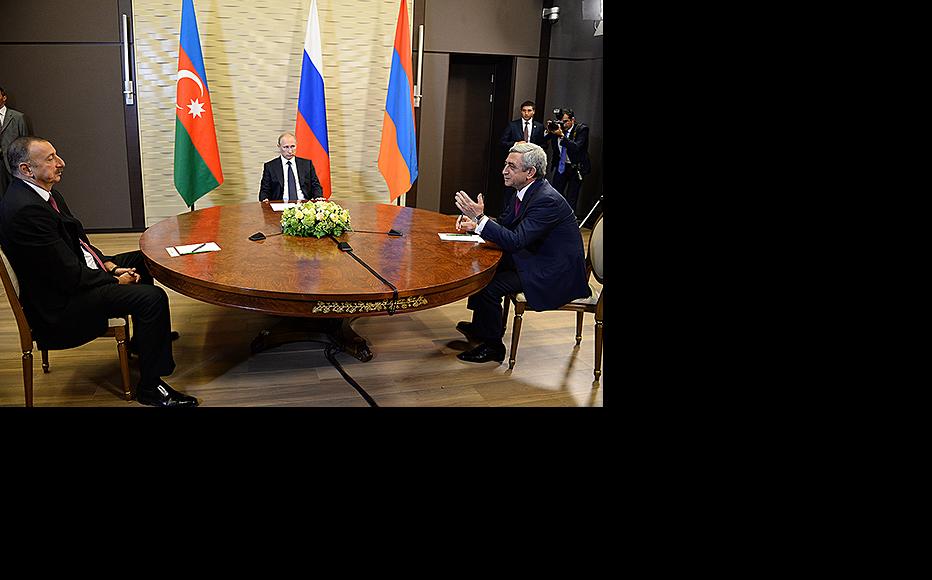 Analysts say that Russian president Vladimir Putin is trying to position Moscow as the key to peace in Nagorny Karabakh by hosting talks between the Armenian and Azerbaijani presidents this week.

The Sochi summit on August 10 was the first time Azerbaijani president Ilham Aliyev and his Armenian counterpart Serzh Sargsyan have met face-to-face since the recent upsurge in violence around Karabakh.

Russia is one of the three co-chairs of the OSCE’s Minsk Group, the mediating body on Karabakh. However, Putin did not involve representatives of France and the United States, the other two co-chairs of the tripartite group.

“We respect all international formats and will continue to work with our colleagues,” Putin said in Sochi. “But we also think that we have particularly close relations and a deep, shared history, which allows us to exchange opinions openly about where we are, and about what we need to do to move towards resolving the problems that the past has bequeathed us.”

War broke out around Karabakh at the end of the Soviet period, when its Armenian majority demanded to secede from Azerbaijan. This ended in a 1994 ceasefire which left Karabakh outside Baku’s control, but no final peace deal has been reached.

Clashes have continued both on the state frontier between Azerbaijan and Armenia and along the “line of control” which forms a front-line boundary around Karabakh.

The last month has been one of the bloodiest in the last 20 years, with dozens of people dead and wounded. In the first five days of August, Azerbaijan’s defence ministry said it had lost 14 men, bringing the total for the year up to 27. Armenian forces said they lost five men in the first days of August. Most observers think both sides are understating the number of casualties. (See also Azeri-Armenian Conflict Fears as Death Toll Rises.)

Ahead of the tripartite summit, this reporter was among media representatives invited to visit the front line by the Azerbaijani army.

It was clear that the military wanted journalists to see how local residents and soldiers alike were anxious for the army to re-launch hostilities. All those who spoke to IWPR were keen to see Azerbaijan recapture Karabakh.

IWPR's reporter was introduced to two soldiers who had the chance to go on leave, one for his sister’s wedding, the other for the wedding of his brother. Both of them had refused to go, wanting to stay at the front, their officers said.

The journalists were also taken to the wake for Garyaqdi Ahmedov, one of the soldiers killed on the frontline.

The soldier’s father Eldar Kishi said his son had said, the day before his death, “Dad, you will be proud that your son gave his life for his country.”

Troops said that the daylight hours were normally quiet, and that fighting tended to take place under cover of darkness.

Although no practical steps to ease the conflict were announced in Sochi, Russian foreign minister Sergei Lavrov said the talks had been successful, with the leaders of Azerbaijan and Armenia re-affirming their commitment to dialogue.

“The president of Russia wanted to know whether the two sides want to end the Nagorny Karabakh conflict, and what their expectations are,” commented Sargsyan after the talks.

“This problems demands resolution,” Aliyev told Putin at the summit. “This has gone on for a long time, and I hope that your personal participation in this process will give a new stimulus to the talks process.”

The Karabakh crisis comes as Russia finds itself increasingly under pressure over the separatist conflict in Ukraine.

Although Russia has traditionally been a close ally of Armenia, it has also moved closer to Azerbaijan in recent years, agreeing to sell it billions of dollars worth of arms. (See Yerevan Angry at Russian Arms Sales to Baku.)

“Russia continues to play an important role in the region and will be crucial to how the Azerbaijan-Armenia conflict develops,” argued Natiq Jafarl, secretary of the opposition REAL political movement in Azerbaijan. “Today Russia, which is facing serious pressure from the West because of the war in Ukraine, is trying to improve its image and show the world that it is the only guarantor of peace in the region.”

However, Asim Mollazade, chairman of Azerbaijan’s Party for Democratic Reforms, which tends to vote with the government, was unimpressed by Putin’s attempt to put himself in the centre of the picture.

“We must put all our efforts into foreign policy, so as to persuade the international community of the need to impose sanctions on Armenia,” he said. “It’s clear that it is pointless to waste time on Russia as a mediator.”